Even as the devastating impact of Typhoon Haiyan began to emerge in the Philippines, Somalia too experienced one of the deadliest tropical cyclones in its history. Tropical Cyclone 3A moved over Puntland, Somalia, on November 10–11, 2013, causing flash floods that left more than 100 dead. The storm destroyed hundreds of homes and thousands of livestock, according to news reports.

Cyclones are unusual in Somalia. Tropical Cyclone 3A is just the fifth storm to strike the country since records began in 1966, wrote meteorologist Jeff Masters. The last cyclone to come ashore over Somalia was Tropical Cyclone Murjan on October 25, 2012. Tropical Cyclone 3A over Somalia, as seen by the Moderate Resolution Imaging Spectroradiometer (MODIS) instrument on NASA's Terra satellite at 07:35 UTC on November 11, 2013. Image credit: NASA.

* Food and Agriculture Organization of the United Nations and Somalia Water and Land Information Management (2007) Climate of Somalia. (pdf) 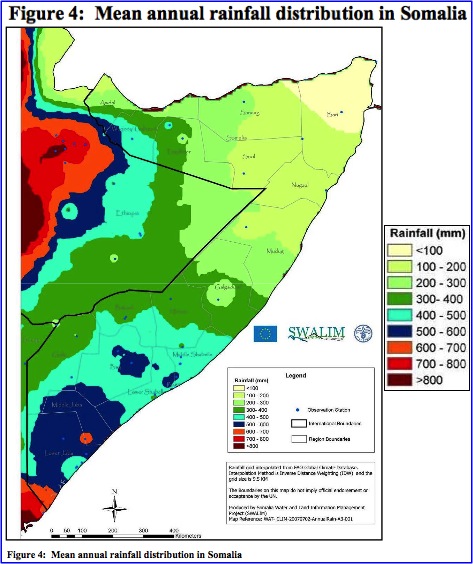 A tropical cyclone that hit the north-eastern Somali region of Puntland over the weekend killed up to 100 people, the regional leader has told the BBC. 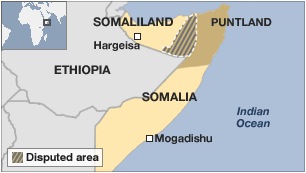 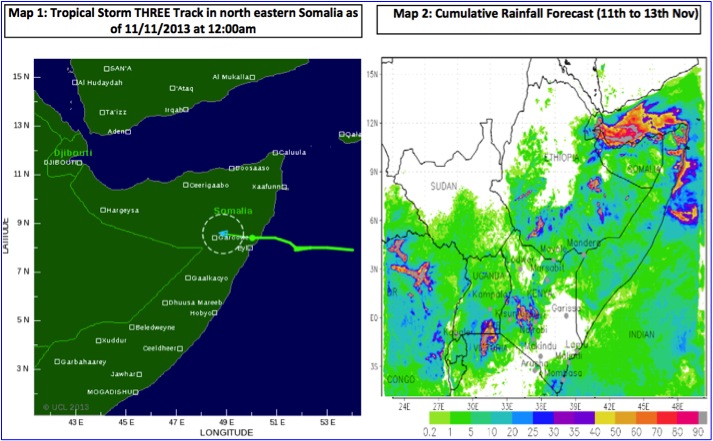 Heavy rains reported in North Eastern Somalia as tropical storm 03A passes the Northern Coast of the country During the last 24‐hours a tropical storm named 03A has been developing in the northern Indian Ocean and has hit some coastal areas and inland in Puntland. For the last three hours the storm has been moving away from inland areas towards the Gulf of Aden and coastal areas of Bari and Nugaal regions. The storm brought strong winds and heavy rains within the areas of Bari region (Eyl and Bandar Beyla) causing the death of 7 people in the area. In addition, property including livestock, structures, boats and a dhow from Yemen were destroyed. The area is currently flooded and movements by road have been rendered impossible. Strong winds with heavy rains are therefore expected in some parts of the northern Somalia areas (including Bosasso, Berbera, Eyl and Bandar Beyla) situated in the storm path in the next 24 hours. It is therefore advisable to stay indoors and take the necessary precautions to reinforce infrastructures as the strong winds may lead to destruction of weak structures. Flash floods are also foreseen along these areas.

MOGADISHU, November 11, 2013 (AFP) - At least 100 people are feared dead in a ferocious storm battering Somalia's northeastern Puntland region, the local government said Monday, warning that hundreds more are missing. The government in the semi-autonomous region described the situation as a "disaster", with entire villages destroyed, and said it was appealing for emergency international aid. "A tropical cyclone storm (has) wreaked death and destruction... the storm brought high wind speeds and torrential rains, causing flash floods," said a statement from Puntland's government. "Information collected from coastal areas via irregular telephone contact over the past 48 hours indicates that up to 100 people might have been killed, while hundreds of other people remain unaccounted for," it added. Puntland President Abdirahman Mohamed Farole said the "crisis was immense", with the government declaring the situation a "disaster". The government is organising relief efforts, but also appealed for international support. "Preliminary information also indicates that homes, buildings, boats and entire villages have been destroyed and over 100,000 livestock lost, endangering the livelihoods of tens of thousands of local people," the government said. Heavy rains and fierce winds are expected to continue until Wednesday, it added. "Affected coastal areas are in need of emergency supplies of clean water, non-perishable foods, medicines, emergency shelter materials, and blankets," the government said, adding it was setting up makeshift shelters for those made homeless. Local authorities in the coastal towns of Eyl and Bandarbeyla said the remote settlements were badly hit. "At least 11 people were killed and six others injured in the Eyl area this morning alone," said Feisal Kalif, deputy commissioner of Eyl. "People are confused, and the situation is getting worse." Somalia has been riven by civil war since the collapse of central government in 1991. Impoverished Puntland, which forms the tip of the Horn of Africa, is run by its own government, although unlike neighbouring Somaliland, it has not declared independence from Somalia. The often lawless region is also home to numerous warlords, as well as for many years hosting pirate gangs who raided far out into the Indian Ocean. Al-Qaeda-linked Shebab are also based in Puntland, with bases in the rugged Golis mountains, honeycombed with caves and difficult to access. On Friday the insurgents staged a failed bid to free comrades in prison in the town of Bosaso, with up to 40 men involved in the raid. The impact of the storm will be a possible complicating factor as Puntland gears up for a presidential election due in early 2014, which was suspended in July after the government warned that the risk of violence was too great.

Prior to July, 1995 ZetaTalk stated that Weather Predictions would be inaccurate, based upon the wrong parameters.

[Weather Irregularities]
Prior to July, 1995 ZetaTalk stated that weather changes were heralding the approach of Planet X.

[Hurricanes]
In September, 1999 ZetaTalk stated in their predictions for the Next 3 1/2 years that Hurricanes would be no more fierce than previously, but would occur in atypical places. People are in dire need of food, clean drinking water and shelter

Nairobi November 29 2013 – Over 100,000 people devastated by the recent cyclone in Somalia are in urgent need of humanitarian assistance, aid agencies report. The tropical cyclone that hit the Puntland region of Somalia earlier this month resulted in the death of at least 80 people, mostly children and the elderly, and is estimated to have killed more than 100,000 livestock. Pastoralist communities appear the hardest hit.

Information from affected communities was initially limited due to the remoteness of the worst affected areas. Communication was halted from the lack of electricity to charge mobile phones, which was the only method of communication. Initial assessments indicate there is an urgent need to provide food, clean drinking water, shelter and medical supplies. Families have lost their homes and possessions as floods damaged entire villages, roads and fishing boats. Fears are also emerging of an outbreak of diarrhea and other waterborne diseases as many water sources were destroyed, while others are at risk of contamination from dead livestock.

Adeso’s Executive Director Degan Ali called this a silent crisis that needs to be addressed urgently. “For the pastoralist communities, the loss of their livestock could lead to an even greater number of people dying. Livestock is the basis of the local economy and their only means of survival. We, therefore, must respond quickly with more humanitarian aid but also recovery efforts to help restore livelihoods. ” she said.

NGOs in Somalia have been working with Puntland authorities and UN agencies through daily coordination meetings to determine how best to respond to save lives. To date, aid agencies have distributed food, water treatment tablets, shelter material and provided medical services. Puntland authorities have also created a bypass on the damaged Garowe/Dangoroyo road, facilitating the delivery of supplies to an estimated 30,000 people.

The storm has hit vulnerable communities who were still recovering from the 2011-2012 Horn of Africa famine and drought. With over 65 percent of the population relying on pastoralism to earn a living, the huge livestock deaths could have long-term negative consequences. Beyond their immediate needs for food, water, medicine and shelter, families will need support to rebuild lost livelihoods including restocking of livestock. Displaced families will require new shelter or relocation in the long-term, and coastal communities will need assistance to replace lost fishing equipment.

“We appeal to the international community for more assistance to respond to this disaster. While agencies are responding to other much bigger crises that have greater media visibility around the world, we must remember the plight of the most vulnerable children and families in Somalia,” says World Vision Somalia Country Director, Francois Batalingaya. • Tropical Cyclone THREE made landfall on the NE Somali coast late on 10 Nov (UTC), and moved W over Bari and Nugaal region, weakening. Late on 11 Nov it started moving away from these areas, towards the Gulf of Aden, dissipating. It affected the areas along its path with strong winds and heavy rainfall (see inset map), causing flash floods.

• The Puntland authorities declared a natural disaster emergency on 11 Nov.

• Efforts to conduct a rapid interagency assessment are hampered by a break in the main road between Garowe and the coast and the inability of flights to land in Garowe or Bossaso airports as of 12 Nov. The UN Humanitarian Air Service is expected to be restored by 13 Nov to both airports.

• Media quote local government officials estimating that the death toll may reach 300 in Puntland (at least 100 reported so far), while more are currently unaccounted for following the storm.

• Communications lines and road access are currently severed, hampering the collection or verification of information and the delivery of assistance.

• Thousands of livestock are reported dead as a consequence of the icy rain.

• Early reports received by the Puntland authorities suggest substantial damage to homes, buildings, and other infrastructure in the area.

• In the next 24h light to moderate rain may affect NE Somalia, moderate (locally heavy) rain may affect S and W Somalia. - See more at: http://reliefweb.int/map/somalia/13-nov-2013-somalia-tropical-cyclo...