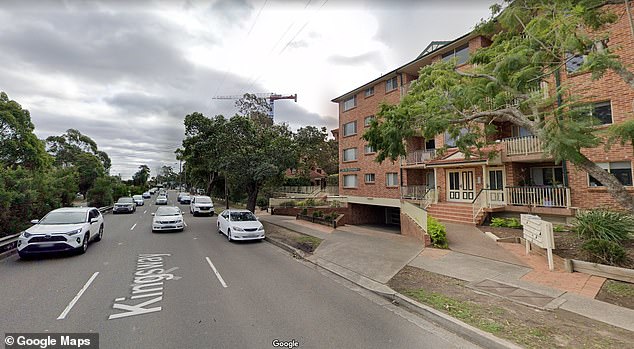 Two people have been injured after a crane collapsed between two apartment buildings in Sydney.

Police and paramedics were called to The Kingsway in Woolooware on Thursday afternoon.

Two people were rushed to hospital with minor injuries.

Crews recover crane that toppled over at Toronto construction site ...

Crews recover crane that toppled over at Toronto construction site 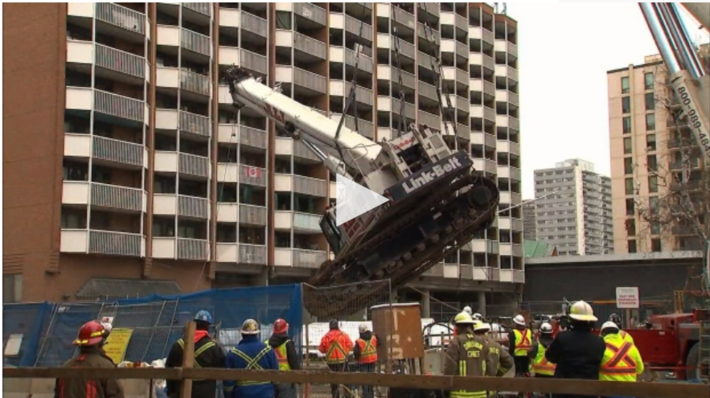 TORONTO -- Crews have recovered a crane being used in Eglinton Crosstown construction that toppled over after the ground underneath it collapsed.

The incident occurred Monday night at around Eglinton Avenue and Mount Pleasant Road.

Engineers say the ground shifted due to soil erosion caused by water. When this occurred, the 70-tonne piece of equipment fell over.

"The crane was being used yesterday to lift loads at the site and apparently some water did appear and the sink hole opened up and the crane sunk into the sinkhole," Kristin Jenkins with Crosslinx Transit Solution told reporters at the scene. 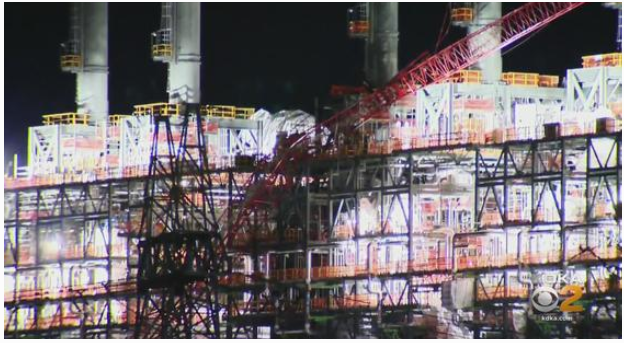 High winds sent a massive crane spinning atop a Manhattan high-rise construction project Thursday night, causing debris to crash onto the streets below. 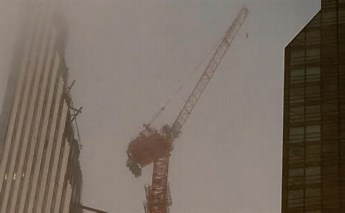 High winds in New York City caused a massive crane to continuously spin atop a high-rise construction project Thursday night, sending debris crashing down onto the streets below in Midtown Manhattan.

According to a report in the New York Post, FDNY crews and NYPD personnel responded to the scene to evacuate the area around the building while advising citizens to avoid the area through social media alerts.

The crane was safely secure and simply "weathervaning" - a normal function that allows the structure to swing 360 degrees in such conditions. There were no reported injuries from the falling debris after fire crews and law enforcement secured the surrounding area.

An ominous-looking video filmed at the scene shows the crane spinning through the gloom and fog high above the nearby buildings: Worker crushed to death as crane collapses in UAE 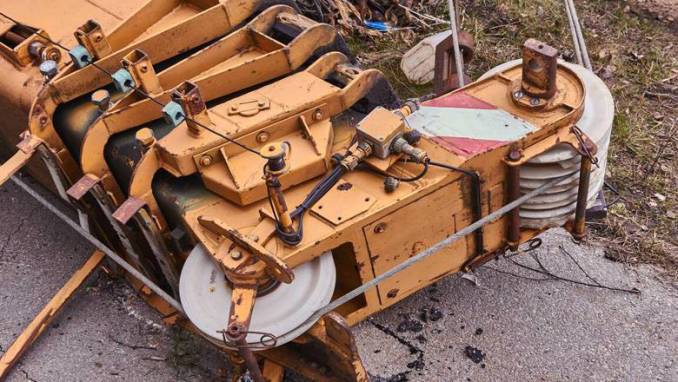 An investigation has been launched to determine the cause of the accident.

A 36-year-old Asian worker died in Sharjah after a crane collapsed and fell on him on Thursday morning, police said.

The man was carrying out his duty at a site in the emirate’s Al Madam area when the incident happened. The Sharjah Police, along with paramedics, rushed to the site as soon as they received a report.

The worker, however, died on the spot after being crushed by the crane.

An investigation has been launched to determine the cause of the accident and ensure that there was no foul play involved.

When the police and investigators arrived at the site, they found that the security and safety surpervisors of the contracting company in charge had already run away. They were reportedly present when the crane collapsed.

The authorities managed to track them down and take them into custody for interrogation.

The body of the worker had been transferred  to the forensic laboratory in Sharjah for repatriation procedures. Russian authorities initiated a criminal case after the fall from the strong wind of three tower cranes at a construction site. Two people were injured as a result of the accident. The case was initiated under article 216 of the Criminal Code: ′′ Violation of safety rules in construction works, which caused serious harm to human health ".

According to the investigation, on the day of September 2, when the cranes were at their workplaces, the gust of strong wind leaned the first crane, and it fell behind to ground, then the second fell and the second hit the next to the third.

The second faucet together with the worker fell to the ground, and the third one caught up on the top floor of the building under construction. First and second crane workers were injured and suffered fractured bones and were taken to hospital. The third man was not hurt and left the cabin on his own.

PHNOM PENH, Cambodia – A construction crane in Cambodia´s northwestern city of Poipet on the border with Thailand collapsed Wednesday, killing at least five people and injuring four others.

The crane was being operated on ground made wet by rain, rendering it unstable, said Ath Khem, chief of the Banteay Meanchey provincial police. He said the crane fell as it was lifting heavy concrete blocks, and described the accident as resulting from carelessness.

Poipet, a major trading post, is a boom town with many casinos patronized by foreigners, including many from Thailand. It has a reputation as a “sin city.”

In recent years, a fast-growing economy fueled a construction spree in Cambodia. But the building boom has suffered from a number of fatal accidents, the result of shoddy construction practices and poor enforcement of safety standards.

In January, at least 36 people were killed in the collapse of a building under construction in the southern city of Kep, with 23 others rescued alive. Women and children were among the victims, since it is not unusual in Southeast Asia for the families of construction workers to live at the work site.

Five women were killed and four others injured after a construction crane fell on a house in Phsar Kandal district, in Poipet, Banteay Meanchey province. 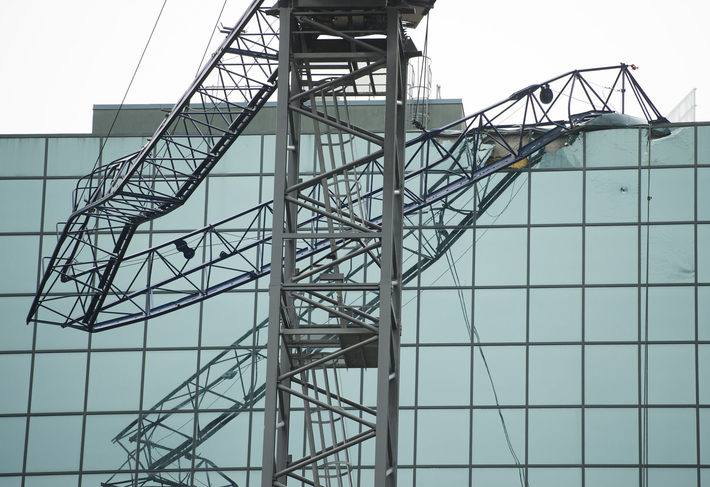 TORONTO – The mayor of Toronto is calling for a speedy investigation into the cause of a crane collapse in the city’s downtown — the second such incident in less than a month.

Toronto Mayor John Tory says that while he’s thankful nobody was seriously injured in either incident, it’s important that investigators get to the bottom of why the cranes collapsed.

Police have said Thursday’s incident happened at about 10:30 a.m., when a crane fell into an intersection.

The earlier collapse was on July 16, when a crane fell into a building in the city’s financial district.

Officials have said nobody was injured in that case either.

Tory says he’s encouraging the construction industry to “take all precautions possible” to keep their sites safe, and is pushing for the province’s Ministry of Labour to send instructions to the industry “as soon as possible.”

“This is the second crane collapse in our city in less than a month and so we will want to know what exactly happened in both cases and how it can be prevented,” he said in a written statement.

Even though the incident occurred only sometime ago, the videos of the heart stopping incident have surfaced online.

Reportedly, the accident occurred when the workers were carrying out an inspection of the crane used to carry equipment for shipbuilding. The massive crane unexpectedly crumbled and crashed to the ground with a loud sound.

“Around 20 workers were said to be working on the inspection when the crane crashed. Some workers managed to run for safety, some others received injuries and at least 10 workers were crushed under the weight of the crane,” a police reportedly official said.

Three bodies have been retrieved from under the debris of the crane till now. The police with the help of shipyard staff, are carrying out rescue operations. “The injured workers are being shifted to the local hospitals,” the police said. 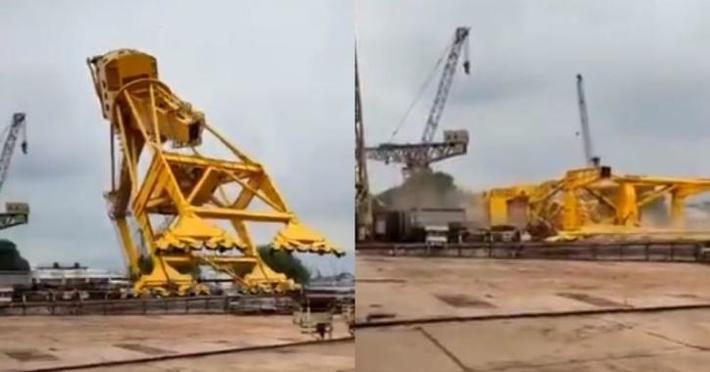