Floods in Pakistan: Eastern Pakistan steadily sinking up until the time of the Pole Shift As the continent of India is pushed steadily down and under the Himalayas, lands in Pakistan that lie on the Indo-Australian Plate will participate. The plate border as it transverses Pakistan reflects this, with the Indus Valley on the Indo-Australian Plate being lowland, and the highlands to the west on the Eurasian Plate. Lahore and eastern Pakistan can thus expect to steadily sink up until the time of the Pole Shift, when it will share the dive that India itself will experience. [http://www.zetatalk.com/ning/05no2011.htm]

ZetaTalk Prediction 10/9/2010: The 7 of 10 scenarios describe plate movements, and for this to occur something has to release the deadlock, the current stalemate where the plates are locked against each other. Once the deadlock is broken and the plates start moving, sliding past each other, new points where the plates are locked against each other develop, but these are weaker locks than the one at present. The current lock, as we have so often stated, is the Indo-Australian Plate which is being driven under the Himalayans. This is no small lock, as the height of the Himalayans attests. Nevertheless, the activity in this region shows this likely to be the first of the 7 of 10 scenarios to manifest. Bangladesh is sinking and the Coral Sea is rising, showing the overall tipping of the Indo-Australian Plate. Now Pakistan is sinking and not draining its floods as it should, while Jakarta on the tongue of Indonesia is also sinking rapidly, showing that the tilt that will allow Indonesia to sink has already started.

[Map of Earthquakes in Pakistan]

Map of earthquakes in Pakistan region since October, 2004, as of 27 September, 2012 [http://www.emsc-csem.org/Earthquake/?filter=yes] 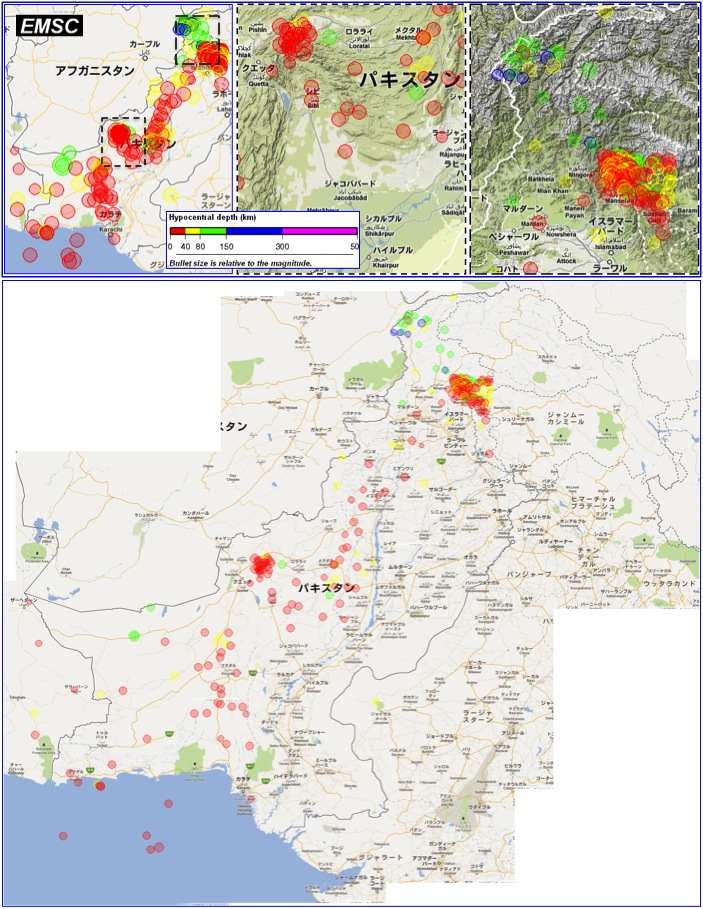 The Indus River is one of the points on the Indian sub-continent that is being pushed under the Himalayas range, as a close look at where the mountain building along the northern edge of the Indo-Australian Plate occurs shows. We have pointed out that the mountains in the interior of India seem to disappear as one approaches the Himalayas, and that this is because it is there that the plate is being pushed down. We have predicted that as the tongue of the Eurasian Plate holding Indonesia is pushed under the eastern edge of the Indo-Australian Plate that this edge will lift, tilting the Indo-Australian Plate down on the western edge. This would first be noticed on land, especially land subject to being flooded, as such a change under the sea would escape notice unless a tsunami buoy sounded an alarm. What should be noted is that the flooding, ostensibly from rains, are worse than anticipated from the rains alone. What should be watched is how well the flood waters drain, and whether a drop in elevation is noted along the Indus River and its outlet into the Indian Ocean. The Earth changes we have predicted for this region have begun! [http://www.zetatalk.com/ning/04sp2010.htm]

The flood waters that beset Pakistan in July, 2010 have not receded completely, and there is at last an admission that they are not going to recede. In other words, Pakistan, on the western border of the plate holding India, has sunk, just as the Zetas predicted.

This issue was presented in this newsletter on Issue 201 on September 5, 2010 when the flood waters were slow to recede. And in Issue 212 on November 21, 2010 when they were shown to be lingering even months after the July floods. But now, there can be no denying the situation. Earth Observatory, a NASA function, admits that by comparing images from the year before, Pakistan's elevation has sunk. Period. The Zetas state this drop would be 10 feet, and this 10 foot drop is apparent. [http://www.zetatalk.com/newsletr/issue217.htm]

* In 2003, Sindh province was badly affected when above normal monsoon rainfall caused flooding in the province; urban flooding also hit Karachi where two days of rainfall of 284.5 millimetres (11.20 in) created havoc in the city, while Thatta district was the worst hit where 404 millimetres (15.9 in) rainfall caused flash floods in the district. At least 484 people died and some 4,476 villages in the province were affected.

The 2007 South Asian floods were a series of floods in India, Nepal, Bhutan, Pakistan and Bangladesh. News Agencies, citing the Indian and Bangladeshi governments, place the death toll in excess of 2,000. By 3 August approximately 20 million had been displaced and by 10 August some 30 million people in India, Bangladesh and Nepal had been affected by flooding.

* The 2009 India floods affected various states of India in July 2009, killing at least 36 people in Orissa and 13 in Kerala. The most affected states were Karnataka, Orissa, Kerala, Gujarat and North-East Indian states.

Floods triggered by heavy monsoon rains killed at least 36 people in the eastern Indian state of Orissa alone and inundated half a million homes. On July 13, seven people were killed and many others missing when a bus fell into a rivulet after being swept away by flood waters in Nayagarh district in Orissa. Nayagarh is 87 km from the Orissa state capital, Bhubaneswar. The world famous Sun Temple at Konark is also water-logged, causing hardship for tourists. The most flood affected districts in Orissa are Nayagarh, Cuttack, Ganjam, Keonjhar, Koraput and Kandhamal.

* The 2009 Karachi floods in Pakistan's financial centre, Karachi, have killed at least 26 people. The death toll is expected to rise, and more than 150 people have been injured in a series of related incidents. The floods are the result of the heaviest rains in the region in thirty years. * In September 2011, at least 361 people were killed, some 5.3 million people and 1.2 million homes affected as well 1.7 million acres of arable land inundated when massive floods sweeped across the province of Sindh as a result of monsoon rains (see 2011 Sindh floods).

Causes: In the month of July Pakistan received below normal monsoon rains; however in August and September the country received above normal monsoon rains. A strong weather pattern entered the areas of Sindh from the Indian states of Rajasthan and Gujarat in August and gained strength with the passage of time and caused heavy downpours. The four weeks of continuous rain have created an unprecedented flood situation in Sindh.

* The 2011 Kohistan floods are a series of flash floods that took place throughout the month of August in the Kohistan District of Khyber Pakhtunkhwa in northwest Pakistan. The floods, caused by overnight heavy rains, have left at least 63 people dead and washed away dozens of houses, settlements, livestock and vegetation. ["63 dead as flood waters engulf Kohistan Valley"] There are relief and security operations currently underway to provide aid and treatment to those affected by the natural disaster. The floods are the most destructive since the deadly 2010 Pakistan floods which rampaged the whole country.

* In September 2012, more than 100 people died, and thousands of homes destroyed, with thousands of acres of arable land affected when intense rainfall battered Khyber Pukhtunkhwa, Southern Punjab and Upper Sindh. As a result of monsoon rains (see 2012 Pakistan Floods).

* 7 of 10 Indo-Australian plate moving and tilt in floods

* Indo-Australian Plate is steadily tilting! The evidence is here.

* Southern Pakistan Sinking: 14% of Max Flood are still inundated; as...

* Domino Effect of Plate Movement during 7 of 10

Pakistan borders India, which will be forced under the Himalayas in a violent subduction of the Indio-Australian plate, and its northern territories are within the Himalayas which will be subject to mountain building during this subduction. However, being situated on the foot of the Eurasian Plate, and bordering the southern fault line of this plate, Pakistan will not find itself subducted but it will be subject to what may seem like endless quakes due to the number of changes affecting the area. After the hour of the shift, Pakistan will find itself with a higher elevation above sea level, more ocean access as India to the east will be underwater, and additional ocean access from what we anticipate to be an inland bay cause by the ripping and sinking of the Eurasian Plate just to the west of Pakistan. Those who would survive are advised to stay out of structures during the hour of the shift and during the aftershocks that will continue for months. Tent living will be the best. Bone chilling cold will be the largest danger after the shift, as Pakistan will be literally within the polar circle. Take a clue from the Eskimos in how to dress and build homes, and take to fishing the oceans as a way of life. Due to the hostilities between India and Pakistan, we do not anticipate immigrants from India to flood there prior to the shift, but any of India's people who stay afloat may arrive on the shores of Pakistan, pleading for help.

* Pictures from Movies of Crust Movement during Pole Shift