Today there has been major power outages/surges in downtown Washington, DC and Maryland area.  Would the Zetas care to comment on what the cause was and why that location please. [and from another] http://www.nbcwashington.com/news/local/Scattered-Power-Outages-Rep...  An equipment failure at a SMECO power substation in Charles County appears to have caused the outages. A Pepco high-voltage transmission conductor at the substation fell to the ground, according to SMECO. Pepco confirmed it is investigating exactly why that transmission line broke. A back up system that senses low voltage, which are purposely sensitive and designed to sense risk, did their job, and switched over to back up. [and from another] http://www.washingtonpost.com/local/scattered-power-outages-reporte...  A power surge temporarily knocked out power to the White House, State Department and wide swaths of the nation’s capital and its Maryland suburbs. D.C. homeland security officials, utility providers and law enforcement officers in Charles County, Md., said a fire or explosion at an electrical facility in Southern Maryland appeared to be the source of the surge. [and from another] http://bigstory.ap.org/article/5fbc4026ce0f463497c304383eec04f8/whi...  The mechanical failure occurred shortly before 1 p.m. at a transfer station some 35 miles southeast of Washington in Charles County, Maryland, that is controlled by utilities serving Washington and southern Maryland. Homeland security officials in Washington and Maryland said there was an explosion at the station, although the two utilities, Pepco and the Southern Maryland Electric Cooperative, could not immediately confirm that there was a blast or fire. [and from another]http://www.washingtonpost.com/local/scattered-power-outages-reporte...  A piece of metal breaking loose from a power line 43 miles southeast of the District momentarily knocked out electricity. The outage threw scores of public and private office buildings off the grid, but in most cases, the lights stayed on because backup generators kicked in. Dotter said the fluctuation in the voltage probably left some in the D.C. area experiencing a power loss and others a power surge. D.C. Homeland Security and Emergency Management Agency characterized the unusual incident as a broad “power surge” that sent any District facility with a critical operation to emergency backup power. A Pepco transmission conductor in Mechanicsville, Md., “broke free from its support structure and fell to the ground.” The failure on the 230,000-kilovolt Pepco line cut the supply to two power stations run by SMECO. 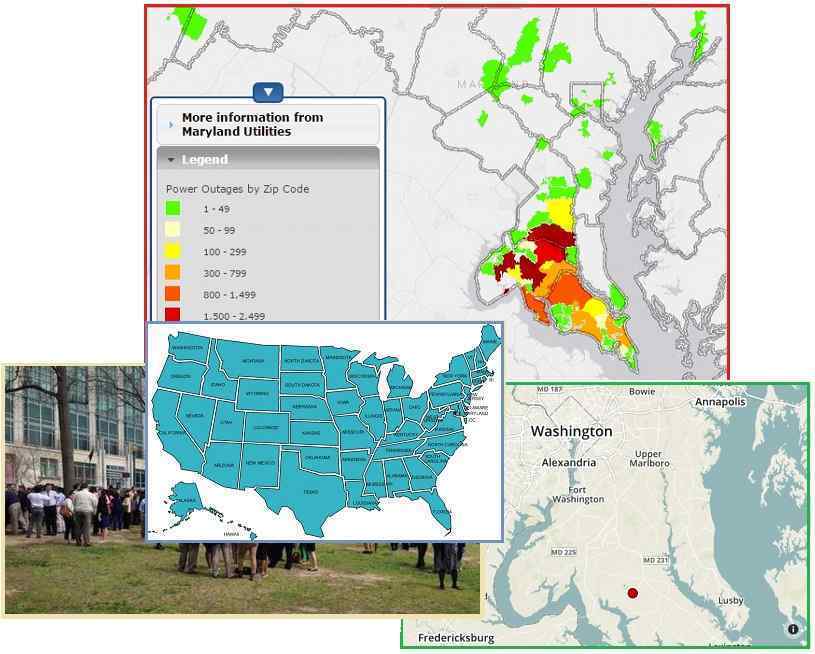 There are several clues that the DC region blackout was caused by electromagnetic pulse. The first was the casual and quick manner in which officials announced it was not terrorism, even before they were able to point to a cause. They knew it was electromagnetic pulse, but were not admitting this to the public. The second clue is the repeated statement by officials that the blackout was due to a surge, when this is not how the grid and its protective mechanisms work. A surge happens during an electromagnetic pulse, but a failure in the grid causes a voltage drop, a brownout. The third clue is the wide ranging and spotty nature of the blackouts, which did not follow a grid but rather affected a region.

Why was Washington DC affected? It is situated in lowlands, known in the early days of the republic as “foggy bottom” for that reason, a swampland which had to be drained so the mosquito population could be controlled. It is situated at a tear point during a time when the N American Continent is in a taut bow, the bow ends at the Aleutian Islands and the tip of Mexico pulling toward each other. The center of the bow is at San Diego. Follow the line across the continent and you arrive at Washington DC. Chesapeake Bay is an obvious rip point where tears have occurred in the past. Will more such blackouts afflict the East Coast of the US? These electromagnetic pulse episodes have just started, and depending upon their vulnerability, will increasingly afflict cities worldwide.