Would the Zetas be able to comment on the recent Walmart closures mentioned in these articles? [and from another] http://beforeitsnews.com/alternative/2015/04/are-the-nationwide-wal...At least five Walmart stores throughout the country have announced that they are closing for up to six months due to plumbing issues. Are the nationwide Walmart closures connected to detention centers for American citizens? Stores in California, Texas, Florida, and Oklahoma closed Tuesday with little to no warning, in some cases without even letting the city know, leaving thousands of people without jobs (Walmart claims employees can move to another store) and sparking widespread theories as to the real reason for the abrupt closures. [and from another] http://investmentwatchblog.com/walmart-stores-from-texas-to-florida...  Walmart Stores from Texas to Florida Close Today for 6 Months without Notice What is going on? I just heard that numerous Wal-Mart stores from Texas to Florida are closing immediately for 6 month period due to “plumbing problems.” There was no pre-announcement and the store shelves were fully stocked. They even had to discount frozen goods 50% to get rid of the stock. They have given all employees a 2 month severance pay. Does this have anything to do with Jade Helm? I have heard that Wal-Mart has a contract with DHS to act as a command and logistics center for FEMA in case of a national emergency. [and from another]https://saboteur365.wordpress.com/2015/04/14/unsolved-mystery-walma...  The Internet has come alive with speculation about the real reason that Walmart has closed down stores from coast-to-coast all at 7 pm Monday night and all for plumbing problems, which the company will not discuss. No one is buying the official Walmart explanation that shutting down stores with no advance warning in Florida, Texas, California, and Oklahoma is due to unfixable plumbing issues. Store employees were given only a few hours notice that their stores were being closed. [and from another] http://www.infowars.com/more-states-added-to-jade-helm-military-exe...  The US military has quietly added more states to its eight-week Jade Helm joint training drill, originally designated to take place in seven southwestern states. The drill, which will run from July 15 to September 15, will now include the states Mississippi and Florida. The exercise is actually an eight-week exercise taking place across seven states. It spans the whole southwest of the United States. Two states – Texas and Utah – appear highlighted as “hostile” territory, according to the slideshow, leading to fears that traditionally conservative areas may be a simulated target for future domestic operations. 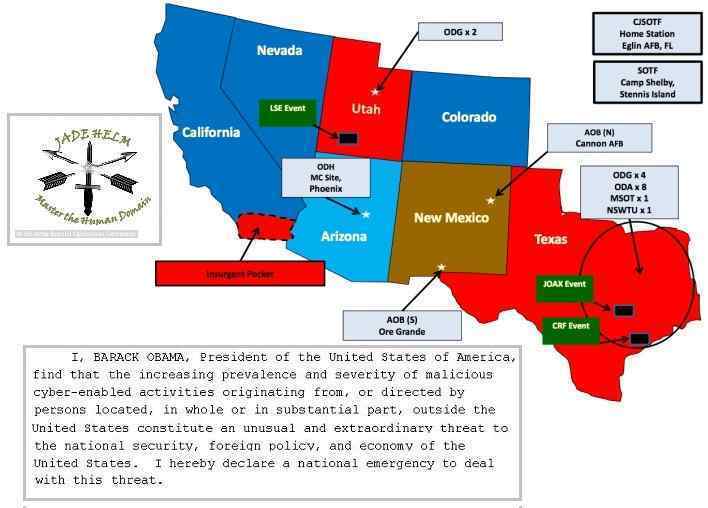 If operation Jade Helm is preparations for an illegal immigrant hoard in the event of Earth changes such as a sinking Caribbean Plate, how do the Wal-Mart closures relate? Wal-Mart is suddenly and oddly closing stores across many of the same states where operation Jade Helm will operate – California, Texas, and Florida.  Operation Jade Helm will be in operation across the southwest, and has recently expanded to include the Gulf states.  The nexus seems obvious to conspiracy theorists, who imagine that martial law and the imprisonment of citizens is being planned.

The Wal-Mart stores are being closed to be fitted as temporary FEMA centers in the event of a New Madrid disaster. The New Madrid adjustments would occur first, per our predictions, along the soft rock from Memphis to the Gulf, and thus Texas and Oklahoma are seen as safe refugee camps for that area. We, the Zetas have also predicted that a West Coast adjustment will follows the New Madrid adjustments, and California would logically be the first to adjust along the San Andreas. The US government has been monitoring the rock tension and earthquake patterns, though they do not share this with their public.

Is there some reason that Jade Helm and the Wal-Mart retrofit overlap each other? Indeed there is, in that the 7 of 10 plate movements anticipated to adjust the New Madrid will not occur unless the 7 of 10 plate movements causing the Caribbean to sink also occur. In fact, per the schedule we have provided, the Caribbean disasters would occur before the New Madrid disasters, triggering the New Madrid disasters by a movement to the west by Mexico. These disasters overlap, and thus Wal-Mart is being asked by FEMA to expedite their readiness at this time. One of the largest disaster training exercises is returning to North Texas to test the skills of first responders.

The North Central Texas Council of Governments and dozens of other federal, state and local agencies have scheduled Big X 2016 for Nov. 11-13 at numerous locations in North Texas.

An estimated 21 special weapons and tactics (SWAT) teams will be among the first responders at a massive training exercise that has been scheduled for Nov. 11 through Nov. 13 in North Texas.

The event is a followup to the Urban Shield exercise held in 2013.

Officials say the three-day event will be a way for first responders to exercise their tactical skills, response capabilities and coordinate operations.

Officials will evaluate and identify areas for improvement, such as in communications, planning, training and equipment.

Puerto Rico govt may shutdown in next 3 months. This coincides with Jade Helm, and Zetas have warned of Caribbean disaster prior to a New Madrid quake.