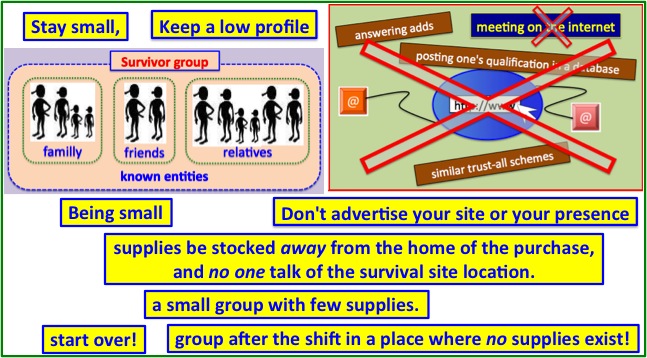 For my understanding I made a chart from "ZetaTalk: Small Groups" shown below. We have recommended from the start that survivor groups start with one's friends and family, known entities. Even should you not particularly like your relatives, and they despise your friends, at least you have known entities about you. We have advised against meeting on the internet, answering adds, posting one's qualification in a database, or similar trust-all schemes. Those with skills are unlikely to need to post them and seek entry into another group, as almost everyone who knows them will be uttering invitations! Thus, those who advertise are likely the type of person to need support, in massive doses, both physical and emotional. We have also advised, as has Nancy within Troubled Times, to keep a low profile, not advertise your site or your presence. After the shift, those who have not lined up a relatively safe location, stocked away a few weeks food supply or a tent or cot, will adapt. Even those who have prepared must find themselves at that level, as the unprepared, soon enough. One cannot live as an island, well prepared and ignoring the neighbors, as the presence of a well stocked and electrified group soon becomes known. Would you turn your guns on your neighbors starving children?

We have predicted that government snoop methods, such as tracking small purchases or the whereabouts of those claiming to be contactees, will fail. They will be overwhelmed with tasks more immediate and pressing, going into the shift. We have recommended that supplies be stocked away from the home of the purchase, and no one talk of the survival site location. If in spite of all these efforts, a group finds someone in their midst that is passing this information onto an establishment arm, what to do?

These types of maneuvers will better your chances, and in fact reduce the likelihood of looting or takeover to almost nil.