Could the Zetas say something about these 2 crop circles? And also what is the reason that so many crop circles appeared since the start of this month. Is there a reason for this uptick? The circles also seem to more to the point, more direct. Could the Zetas say something about this?
[and from another]
I'm too curious what they have to say about the two CC as well. As always. I could be correct or utterly wrong. The message I get from the first one (France 6/11/15). Deals with the magnetics of the cup and the interaction between the planets. Forceful. Also getting wobble related feelings from it too. The orientation of the rendered image also feels correct. The actual image of the crop the orientation is incorrect. The second one from Newton Barrow, Wiltshire. The orientation feels incorrect in the images. I've adjusted it to what feels correct: It's the severe wobble. Where the top part of the image takes a turn first. Severely wobbling back and fourth. Then the bottom doing the same. No magnetic clash, just one severely, than the other severely, back and fourth. Taking turns. No clash like before. Just one than the other back and fourth. Again, I may be somewhat correct or utterly wrong. Look for yourself. For the message to be relayed. Try turning the image left, right, or even upside down. When they post pictures of the fields the orientation isn't always correct. Free your mind. Accept the pole shift and what it means. Allow your eyes to follow the flow. They talk about each having a flow and they do have one! Then the message will reveal itself. It may be subtle or overwhelming. Why the uptick should be clear to anybody here.
[and from another]
http://www.cropcirclecenter.com/ccdata/2015/06/11/FR20150611_A.html
[and from another]
http://www.cropcircleconnector.com/2015/newton/newton2015a.html 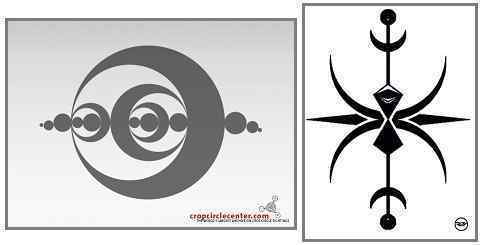 These two European crop designs – one in France and another in the UK – are showing impact. Europe has been assaulted by electro-magnetic pulse for over a year, and continues to be a focus of this assault as the stretching of the Eurasian Plate is pulling the land apart from Scandinavia through the Black Sea and on toward Asia. The Germanwings crash into the Alps in the foothills in France was caused by electromagnetic pulse. The problems with the chunnel between the UK and France are caused by the stretch. Blackouts and malfunctioning planes, trains and electronic communication will continue unabated for these regions.