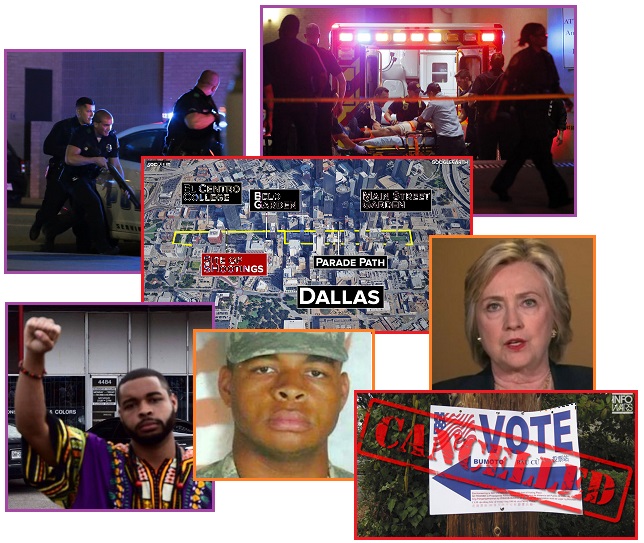 SOZT
The public, reading the news about what seems to be a pending race war in the US, feels there is more than meets the eye in the recent developments. The timing where in short order a black man was shot in Baton Rouge and another in Minnesota quickly erupting into warfare in Dallas. While neither of the precipitating incidents seemed staged, and both seemed justified by police rules, the resulting Black Lives Matter demonstration was an opportunity for George Soros to simultaneously, and alternatively,  promote Hillary as his choice for President and to expedite Martial Law in the US.

Johnson, the angry black man who has been declared the lone sniper, was hardly alone. No more than Oswald was responsible for shooting JFK. Johnson was blown up by a robot so the facts could not emerge. Where Johnson was genuinely angry, a loner whose FaceBook allegiances show his rage at the status of the black man in America, he was not skillful enough to kill several Dallas police officers from SEVERAL sniper locations. He was a carpenter in the Army, not a sharp shooter. It is not difficult to stoke and focus anger in such an individual, so that all that was needed was to position support personnel at the site.

We have stated that Soros is responsible
http://www.zetatalk.com/newsletr/issue455.htm
for inciting violence in Europe. His hand lies behind the coup in Kiev, the lies about the downing of MH 17, the push against Russia in Europe wherein NATO claims a pending Russian invasion when the opposite is the case. Soros wants Russian oil and gas, and Russian territory, under his control and influence. We have detailed how Soros has encouraged activities in the US designed to start uncontrollable riots -
http://www.zetatalk.com/ning/30ma2015.htm
including funding Black Lives Matters demonstrations and inflaming ISIS by hosting Mohammad cartoon contests in the US.

The goal here is to force the US to declare Martial Law, thereby using federal troops and federal resources to defend the assets of the elite. Soros is immensely wealthy, 29 billion by last count, by playing the Hedge Fund market. What he wants is for Hillary to be in the White House, as she would willingly trigger opportunities for Hedge Fund gains. She has a son-in-law in the business, and for Hillary, there are no rules when friends and family stand to benefit.  Soros backs Hillary, who is struggling to change the subject after Comey clarified her many lies re her email server.

Hillary’s posture is to sympathize with blacks during confrontations with police, and to press for greater gun control. African Americans very heavily favor Hillary in the 2016 contest, but where prior confrontations with the police allowed her to posture favorably in this manner, the Dallas massacre changes the conversation.  Trump’s hand has now been strengthened. His posture has been to stand with the police, not fault them. Soros has become resigned to the fact that Hillary will lose. Even with the polls rigged and election fraud attempts, Soros has learned that unless Hillary withdraws, the Clinton Foundation crimes will be in the press. Soros has thus put his money on Martial Law, abandoning Hillary.
EOZT

Prior ZT: http://www.zetatalk.com/ning/30ma2015.htm
Investigative reporters have uncovered 33 million in Soros monies to spur rioting and protests in Fergusen and Baltimore. What is his real agenda here? George Soros, like Dick Cheney, imagines himself a kingmaker, someone above a king, akin to God, in being able to manipulate human society. Soros has failed once again, as Obama refused to rush into martial law to contain the riots and protests, directing the Department of Justice to quietly step in to correct police malfeasance instead.