It makes no sense to me that the Council of Worlds would go to war and force the hand of the elite, instead of just helping get the announcement made.  Highjacking all broadcast signals would be simple. So, my question is: why war?

Humans, living on a 3rd density world, a schoolhouse for young souls where the spiritual orientations mix and can brutalize or care for each other without hindrance, find the concept of how higher density entities supervise this schoolhouse confusing. Human societies have parents that interfere, police and courts that interfere, and when the strong want a course of action it is forced to happen. But a schoolhouse in 3rd density has the Rule of Non-Interference as rule one, what some call the Prime Directive.

We have explained that in the past humans could have conscious contact with aliens. But just prior to the time of Roswell a vote by Earthlings determined the Earth to be a home for Service-to-Other souls in the future, and thus no direct activity by the visitors that would tip the globe in the other direction would be allowed. UFO displays are done only by visitors in the Service-to-Other. The Chupacabras were allowed as they were only allowed to terrify, not attack, humans.  All visitations were to be recorded only in the subconscious of contactees, to lessen the likelihood that they would be attacked during mankind’s rapid Awakening period by other humans frightened by the concept of intelligent life from outer space.

These edicts are encompassed in the Element of Doubt rule, whereby any discernable action by the visitors must be able to be denied by those who are too frightened. UFO displays are obvious for those embracing the alien presence, but for the frightened they are weather balloons. That said, why would the Council of Worlds not simply make the announcement that Nibiru has arrived and is due for a passage? A booming voice from the skies, a takeover of all TV screens or some such action.

To abide by the rule of Non-Interference, mankind must be taking the actions. What the Council is doing is working through the hands of man. Men take the actions, though they can be provided with information or assistance via manipulation of things. We have explained that the rules allow things but not people to be manipulated. Information such as internal codes for Sony computers is provided. Electronic communications such as stock market buy/sell orders are lost or delayed. This is not interfering with mankind’s self-determination, but will eventually force the elite to acquiesce to allow Obama to make his announcement re Nibiru.

Council of Worlds At War? 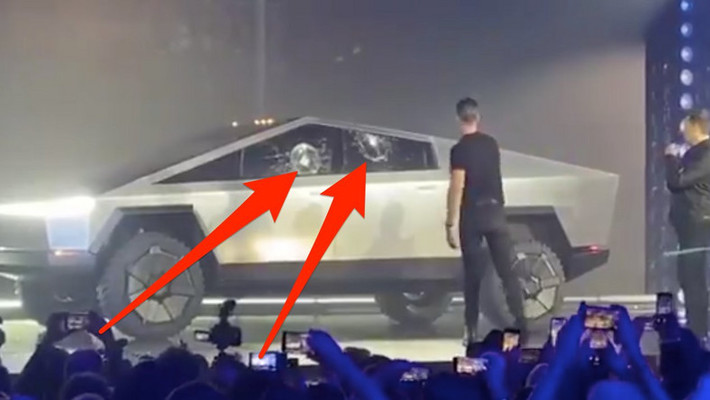 Tesla showed off its newest all-electric vehicle, Cybertruck, during an event in Los Angeles, but its unveiling on Thursday night didn't appear to go as planned. After the Tesla pickup truck was rolled out, the company's chief designer threw a metal ball to prove how tough it was –– except the demo failed spectacularly.

Tesla CEO Elon Musk told an audience the truck is "literally bulletproof" against small types of firearms. The truck's body withstood multiple strikes from a sledgehammer and the crowd cheered on. Musk then summoned design lead Franz Von Holzhausen to try and smash the Cybertruck's "armor glass."

Video shows Von Holzhausen throwing a metal ball and appearing to look shocked when the driver's seat window was completely shattered."Oh my f----ing god," Musk said. "Well...maybe that was a little too hard. It didn't go through."

I think its fair to say that we all wish something like this could happen just to get the word out. Atleast I do.

But this is my guess:- If Obama can't get the word out along with NASA's "official" statement/explanation on it, then the message/announcement will have left itself open to be misconstrued by the rest of the media.

So lets say he's in a hall and initiates the announcement. The live feed is cut/lost, but there are people & reporters in the hall. There is no way he can stop once he started making the announcement. Now, there are two ways the word can get out-- Through the main stream media (monopolized by 6 companies) and through social media.

The media owned by the elite will most certainly coverup. (If you go to youtube, you will see the extent to which problems in Ukraine were instigated by "NATO", but you actively hear/read nothing but propaganda, from even the most reputable news sources. Or if we just look at the way Ron Paul was disrespected & derided by the media, simply because he was questioning over-militarization).

This faucet of information is essentially controlled by the elite. Social media might spread the word. But what will that flow look like? People will ultimately be looking for the "official" word from (you guessed it) elite controlled media. Even dependable news sites will look to elite-controlled media to confirm this event. And the media will have a field day trying to color & distort Obama's announcement. Just look at the IRS "non-scandal". They found out that the IRS agency had investigated conservative & liberal political groups equally, yet if you turn your t.v. on, all you hear is either IRS is targeting conservative political groups or silence. Why? Because the real scandal is that the elite dont want IRS investigating their political groups. So the elite media will naturally allow the news to focus on a fake scandal to fit the elite's agenda.

So now can social media unexpectedly crash after the announcement? If the media isn't corroborating the words of a few 100 ppl, will anyone believe them? The only other outlet for the real news to take shape is through alternative media on the internet. And the elite already attempted a test run of crashing some of them down.

The elites no doubt have several backup plans for after the word gets out (whether announcement takes place or not). The irony of the COW war is that the few who are adamant that the announcement must not happen, are ruining things not only for you & me, but also for the rest of the elite. And they are dragging down the whole lot with them. Fear makes us all stupid I guess. (Anyways, this is how I reason it out when I also wish the word would just get out).

Nancy's Comment: I could not have said it better! Think how quickly Obama could have a mental breakdown (this type of thing has already been tried about a year ago, claims that he was taken away from the White House in an emergency, a mental breakdown, but it did not fly.) Think how quickly anyone in the room who heard the announcement will be leaned on. Do you honestly thing that reporters are free to report what they know? Then there are a few who are suicided. And then the calls for impeachment due to mental instability arise, in the Republican Congress. Obama may be protected, but this does not mean all around him become cooperative robots.

We are forever being asked to explain complex situations in simplistic terms. Nancy gets email asking why Obama does not simply stand up in front of the cameras and make a statement. It seems so simple to them. If he is being blocked in some way he should simply order that the block be removed. Lift his pen or phone and place the order. It is so simple, why is this not done? The idea of every individual having their own agenda, of orders selectively followed or subtly sabotaged, of the potential of bribes or intimidation, of witness elimination or false accusations, and of stalling or passive aggressive maneuvers never entering the picture.

To explain complexity to one who thinks in simplistic terms is not possible, as it takes many lifetimes and many diverse experiences in this lifetime to lay the groundwork.  It is not simplistic! Agreements between leaders of large, multi-cultural countries can be in place without requiring these leaders to drop or resolve every other conflict between these countries as a consequence!  We cannot imbue you with wisdom and experience, so if you cannot contemplate this complexity, or put yourself in the shoes of one who must manage this complexity effectively, then you must either accept or reject our statements as you will.

Take the mayor of a small village, who must encourage the villagers to work with each other. He must politic to get elected, convincing voters he will work in their interest and following through on promises else face recall or failure to get re-elected. He must work within his budget, and in this argue with the village board. He must be clever at finding compromise. He must be aware of religious sensitivities and political allegiances, so as to honor them without committing himself. He must be aware of legal implications, the laws that apply, and any contracts or judgments affecting his actions. He must have good relations with the law enforcement in the region, or potentially suffer harrassment.

What of the weather or wildlife migration? Will snow removal or flooding be an issue he must address? Will hunters chase wildlife through the village, and how to prevent this without impinging on local customs and the rights of hunters? Will troublesome vocal residents insist on dominating the village forums, and if they are pushed aside, will this impact the mayor’s ability to govern on other matters? Now take these matters, which a mayor of a small town of a few hundred must consider, and multiply them by a million. This is what the leader of a large country must consider. Or do you expect us to detail all their concerns, in a long list, so that you, thinking simplistically, can understand?