Could the Zetas say what is going on here, is it like a final struggle. Intimidation. With those Baal 'temples'? [and from another] http://www.leiden-delft-erasmus.nl/en/agenda/2018-10-16-symposium-f... The Palmyra Arch, an iconic piece of Syrian heritage, is coming to The Hague this October. The original 1800-year-old Roman arch was blown up by Islamic State militants in 2015. As an act of resistance, a team of archeologists from the Department of Digital Archaeology at Oxford University set about recreating it with photography, 3D-printing techniques and exact carving. The new marble arch has yet been exposed in London, Florence, Dubai, New York and Arona and will be unveiled in The Hague with a festive event this October. [and from another] https://endtimeheadlines.org/2018/09/the-arch-of-baal-was-put-up-in... Is it just a coincidence that the “Arch of Baal” has been erected in Washington D.C. on the exact same week that Brett Kavanaugh and Christine Blasey Ford are testifying before Congress?  The future of the U.S. Supreme Court is literally hanging in the balance, and many believe that it is quite odd that this ancient pagan symbol has been put up at this precise moment in time.  According to the official website of the Institute for Digital Archaeology, the Arch of Palmyra was unveiled on the National Mall on September 26th, and it will remain there until September 29th.  You can view a photograph of the arch standing directly in front of the U.S. Capitol building.  Just one day after this arch was put up, Brett Kavanaugh and Christine Blasey Ford testified before Congress.  Perhaps this is all just a “giant coincidence”, but things of this importance usually don’t happen by accident. The elite deeply understand that symbols have power, and the fact that the Arch of Baal has been placed directly across from the U.S. Capitol is highly significant. [and from another] https://youtu.be/Y_aLZ3nKSAs [and from another] https://en.wikipedia.org/wiki/Baal Baal was a title and honorific meaning "lord" in the Northwest Semitic languages. The name Baal was particularly associated with the storm and fertility god Hadad and his local manifestations.  The Hebrew Bible, compiled and curated over a span of centuries, includes generic use of the term in reference to various Levantine deities, and finally pointed application towards Hadad, who was decried as a false god. That use was taken over into Christianity and Islam, sometimes under the opprobrious form Beelzebub in demonology. [and from another] https://www.dailymail.co.uk/news/article-3216360/ISIS-blow-2-000-ye... [and from another] https://www.charismanews.com/world/56074-it-s-not-just-times-square... The reproductions of the 50-foot arch that stood at the Temple of Baal in Palmyra, Syria, that will be erected in New York City and London next month will only be the first of many. The organization behind this is the Institute of Digital Archaeology, which is a joint venture between Harvard University, the University of Oxford and Dubai's Museum of the Future. The initial arches from the Temple of Baal that will be erected in New York and London as part of UNESCO's World Heritage Week in April are intended "as a gesture of defiance", but ultimately the plan is to share this "cultural treasure" with as many cities around the planet as possible. Child sacrifice was a central feature of Baal worship. This is what Jeremiah 19:4-6 says. 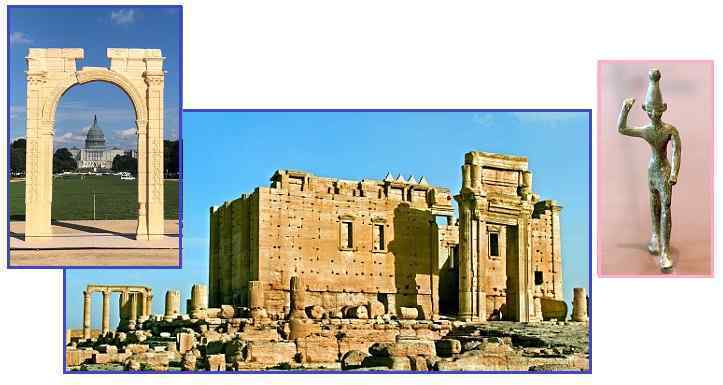 Where promoted under the flag of cultural heritage, thus promoted by the UN and others as archeology preservation, this is intended to be a reminder to the Moloch worshipers that their power persists. The Hillary crowd is barely hanging on these days, with military tribunals retrieving laundered funds from the Clinton Foundation and the Queen’s accounts and openly removing McCain. Forced resignations in Congress have occurred due to sealed indictments. Sessions investigations are openly cleaning out the DOJ and FBI. And what has occurred to date is less than half that this crowd can expect. They are running scared.

Since they are failing on the political front in the US and in Europe, what to do? The Democrats do not have a figurehead to replace Obama, who seems to be in hiding, or Hillary, whose hypocrisy on the #MeToo front is blatant. Shall we pretend that Bill Clinton is pure while decrying the supposed mischief  of a teenage Kavanaugh? By erecting the Baal arch in DC, New York, and London – key cities where the Moloch cult is strong among politicians – they hope to speak to the subconscious of many. We are legion, and we are strong, is the intended message, but what the cult senses is that they are being eradicated!

On January 31, 2020, President Trump signed an Executive Order on Combating Human Trafficking and Online Child Exploitation in the United States. 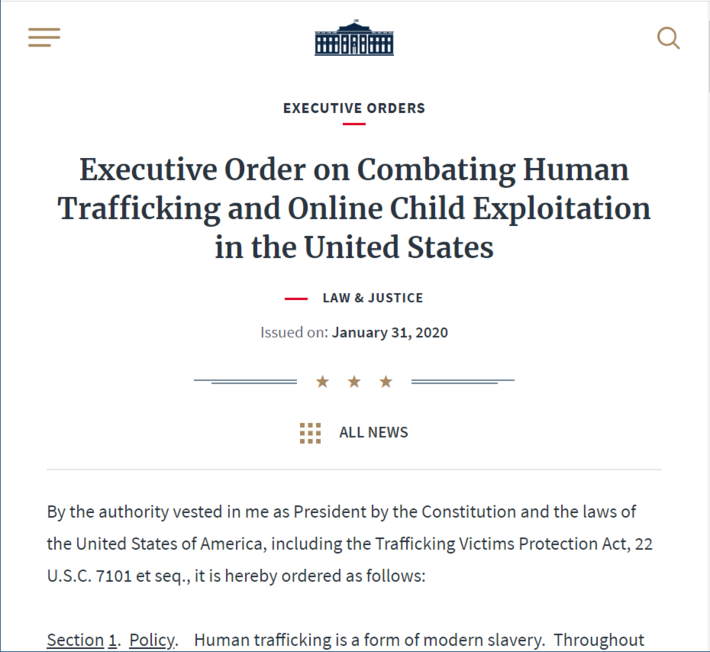 The executive order states:
"As the United States continues to lead the global fight against human trafficking, we must remain relentless in resolving to eradicate it in our cities, suburbs, rural communities, tribal lands, and on our transportation networks. Human trafficking in the United States takes many forms and can involve exploitation of both adults and children for labor and sex."

Before President Trump signed the executive order at the White House Summit on Human Trafficking: The 20th Anniversary of the Trafficking Victims Protection Act of 2000, he stated:
"So today, on the last day of this year’s National Slavery and Human Trafficking Prevention Month, I will take another very decisive action...This order expands prevention education programs, promotes housing opportunities for survivors, and prioritizes the removal of child sexual abuse material from the Internet. And furthermore, it takes the vital step of designating a full-time position here at the White House dedicated solely to combating human trafficking, so people know how important it is." The three sections of the fact sheet have the following titles:

"GOVERNMENT-WIDE EFFORT: President Donald J. Trump has dedicated the full resources of his Administration to work towards ending human trafficking."

"THE HUMAN TRAFFICKING THREAT: The heinous crime of human trafficking is a horrific assault on human dignity that impacts people here in the United States and around the world." 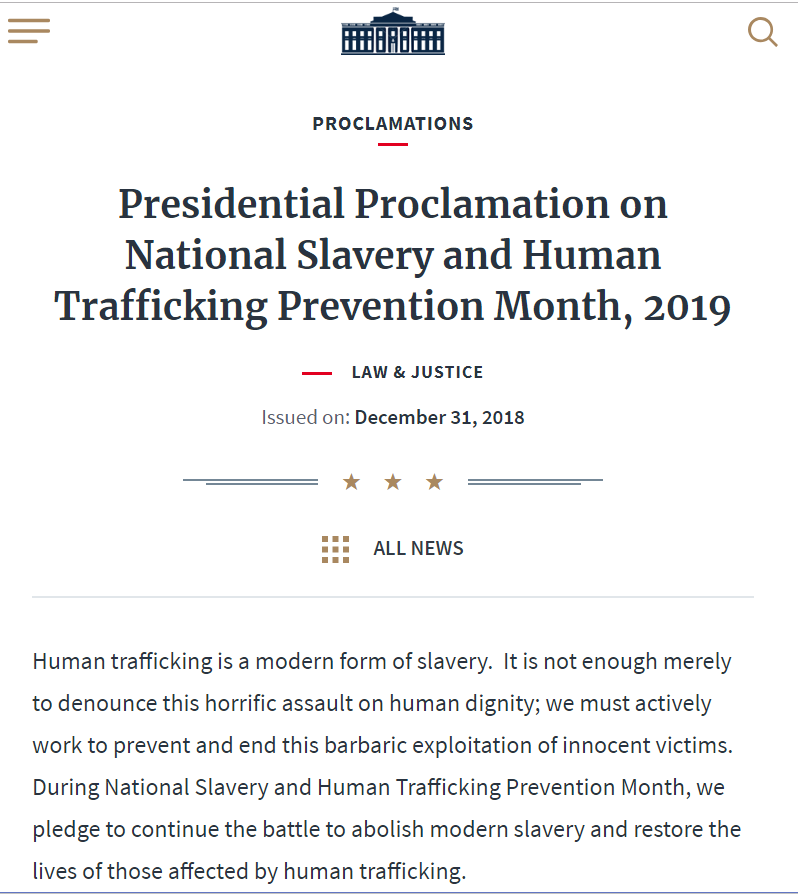 Trump's Presidential proclamation states:
"As a Nation, we cherish and uphold the notion that all people are created with inherent dignity and entitled to life, liberty, and the pursuit of happiness. Human trafficking and enslavement robs victims of these God-given endowments. Modern slavery in all its manifestations is a blight on humanity and an affront to our fundamental values. We will not rest until we eradicate this evil."
https://www.whitehouse.gov/presidential-actions/presidential-procla...

ZetaTalk October 3, 2018 (above on this page) states:
"By erecting the Baal arch in DC, New York, and London – key cities where the Moloch cult is strong among politicians – they hope to speak to the subconscious of many. We are legion, and we are strong, is the intended message, but what the cult senses is that they are being eradicated!"
https://poleshift.ning.com/forum/topics/zetatalk-chat-for-october-3...
http://zetatalk.com/ning/31oc2018.htm

ZetaTalk December 21, 2018 states:
"Quietly, behind the scenes, pedophilia blackmail has been stopped and Moloch child sacrifice prosecuted. Those responsible have either been arrested and imprisoned or executed or kept on a tight leash under House Arrest."
http://poleshift.ning.com/forum/topics/zetatalk-chat-for-december-3...
http://poleshift.ning.com/profiles/blogs/us-military-changes
http://www.zetatalk.com/ning/31de2018.htm