Can the Zetas please share their observations on the conduct and outcome of the 2018 Midterm Elections? Was election fraud a factor in any of the results? What are the implications for President Trump and the Junta in the ongoing battle against the Deep State? [and from another] House Democrats ascendant, set to check Trump's power. https://edition.cnn.com/2018/11/06/politics/2018-election-updates/i... Democrats on Tuesday captured the House of Representatives and are set to exert a major institutional check on President Donald Trump, while breaking the Republican monopoly on power and ushering in a younger, more female and more racially diverse political generation. In his first reaction to a mixed night, Trump chose to celebrate Republican successes even though the loss of the House meant his record of busting political convention could not defy the traditional first-term midterm curse faced by many of his predecessors. [and from another] Q post - Wed 7 Nov 2018 https://8ch.net/patriotsfight/res/62.html#422 History is being made. You are the saviors of mankind. Nothing will stop what is coming. Nothing. Q [and from another] https://www.rt.com/usa/443300-blue-wave-election-trickle/ Democrats have already surpassed the 23 seats they need to win control of the House of Representatives, flipping 26 seats to the Republicans’ two as the day came to a close with votes still being tallied. They didn’t fare as well in the Senate, failing to flip a single seat while Republicans gained four and held onto their majority. Among the historic wins for the Democrats were Rashida Tlaib (D-MI) and Ilhan Omar (D-MN), who both became the first Muslim women elected to Congress, Deb Haaland (D-NM), the first Native American woman elected to Congress, Jared Polis, the first openly gay governor in US history, and Alexandra Ocasio-Cortez (D-NY), the youngest congresswoman ever at 29. There was no blue wave in the 2014 midterm elections either, which was much less polarized and not as nail-biting. Back then, the Democrats lost 13 seats in the House and 9 in the Senate. The situation in 2010 was also a disappointment for the Democrats after they lost a whopping 63 seats in the House. [and from another] https://www.reuters.com/article/us-usa-election-fundraising/democra... Democrats have a $10.5 million fundraising advantage over Republicans in the 25 most competitive races for seats the U.S. House of Representatives ahead of the November elections. 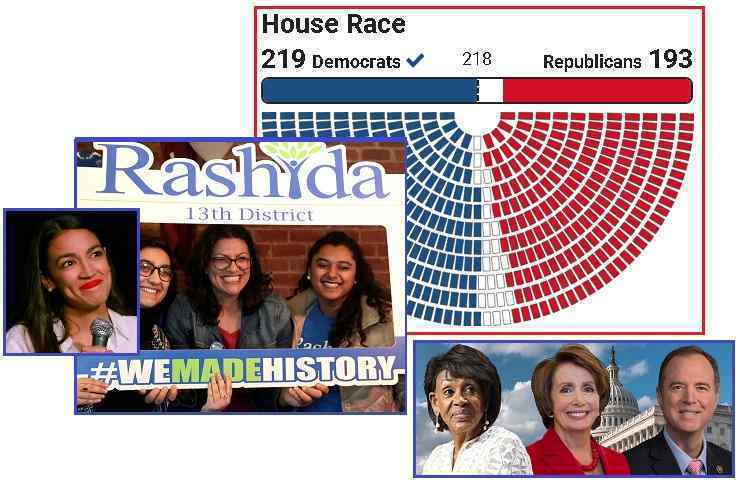 The party in the White House traditionally loses in Congress during the Mid-Terms, and 2018 was no exception. What was exceptional was that the Senate swung toward Trump, a factor of his energetic campaigning for weeks leading into the Mid-Terms. What will this outcome mean for the Trump presidency? President Trump is now more free to press forward to complete the process of exposing and removing corruption in the FBI and DOJ. The FISA documents will be declassified and Rosenstein will resign.

This will result in the Mueller investigation closing down, as the basis of his investigation is all “fruit of the poisoned tree”, the legal term for being without a legal basis from the start. AG Sessions has been quietly awaiting this time, the plan between he and Trump that they would proceed slowly in order to gradually awaken the public. Trump will not get funding for the wall, but barbed wire works as well, and with the military and local militias patrolling, he has achieved his goal. Meanwhile, a far more important issue will gradually move to the fore – preparing for the passage of Nibiru.