Would the Zetas care to comment on the last Trump Administration moves on Syria and Afghanistan? Is this just a political move or there is a deeper reason to bring all this troops back home. Mass arrests and riots? [and from another] After Syria, Trump Planning 'Troop Withdrawal from Afghanistan' December 21, 2018
https://www.aljazeera.com/news/2018/12/trump-planning-troop-withdra... US President Donald Trump is planning to pull thousands of US troops out of Afghanistan, reports have said, a day after the Republican president rebuffed top advisers and announced the withdrawal of all US soldiers from Syria.

We have stated that Dunford’s Junta has been in charge of the US since the fall of 2015, when Obama failed to make the announcement about Nibiru, lacking the courage to do so. Over the next 3 years, Dunford, as head of the Joint Chiefs, has seen McCain’s treason prosecuted, Hillary’s money laundered funds retrieved from the Clinton Foundation, and pedophilia blackmail snatched from the CIA archives at Langley. But more is afoot, as the subpoenas served at the Bush 41 funeral showed. So why is Dunford leaving his post?

We have stated that Martial Law will be instituted everywhere, worldwide, by the time the Last Weeks arrive. This is already in process, gradually, on one excuse or another. Terrorism, riots, migration, or disasters have seen troops deployed. We have stated that the US will likewise call troops deployed to foreign lands home, as they will be needed at home. Now, in step with DoD Mattis resigning, Trump announces that troops in Syria and Afghanistan will be coming home. Is there a relationship?

We have often stated that the uproar over Trump’s presidency has at its center the fear that Trump will allow an admission that Nibiru is real, is present, and a passage is pending. The wealthy elite of the world fear this, as does the Deep State, as it means that those now in control of the world may lose their perch. Quietly, behind the scenes, pedophilia blackmail has been stopped and Moloch child sacrifice prosecuted. Those responsible have either been arrested and imprisoned or executed or kept on a tight leash under House Arrest. The former New World Order leaders are thus no longer in control nor leading.

Despite the lack of official admissions about Nibiru, the public is awake. It is visible, obvious, and as the End Times signs increase, the public is likely to take steps accordingly. Many will quietly prepare to die, some will move to safe locations leaving their responsibilities unattended, migration will increase, but the majority will simply panic. This will mean riots and social disruption, lack of social services, the failure of the goods and services chains such as food and fuel delivery. Food production will be affected, and the safety of citizens will be jeopardized.

It is not control of the media that is the issue, it is spontaneous reaction from the public, much as the Yellow Vest revolution that has arisen in France and spread to many countries, without abatement, or the Arab Spring that evolved in the Middle East. Contactee awareness of the coming Nibiru Pole Shift is broad, over half the population aware. Thus End Times panic would erupt. The Junta is planning to 1. remove the last claims to leadership by Cabal controlled politicians by public trials in 2019 and 2. install younger and more resilient leadership in the US Military and 3. forthwith bring the troops home in anticipation of riots.

A post made by Q on March 7, 2019 was of a link only to an article entitled "Something is Rotten in the Denver Airport", about the art decorating the Denver International Airport. 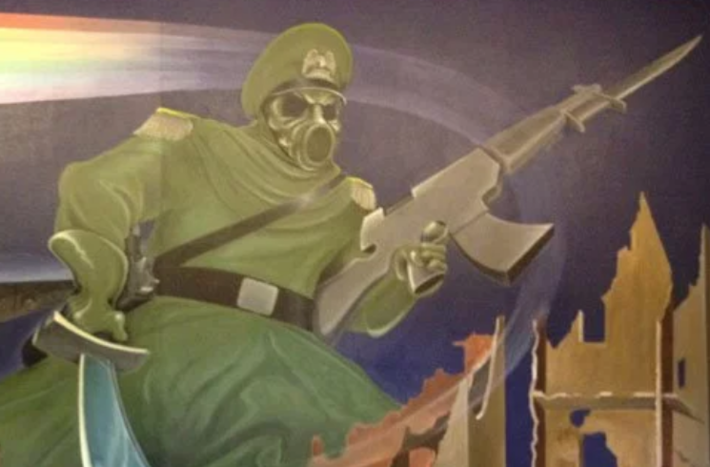 The article states:
"Visitors to the Denver Airport will immediately notice a number of mysterious masonic symbols and murals clearly depicting the end of the word. ...The final mural is oddly reminiscent of the Garden of Eden, the world now lives in peace after the horrific events that have taken place. All the murals, when viewed in sequence, depict a massive genocide followed by the formation of a now less-populated, harmonious new world."
https://thechive.com/2012/03/08/something-is-rotten-in-the-denver-a...
https://qntmpkts.keybase.pub/?q=denver

ZetaTalk February 21, 2009 states:
"Clearly Denver was chosen to be a second White House in the years prior to the Bush administration's ascendancy by coup. We have explained that knowledge of the coming pole shift has been in the hands of those given MJ12 membership, and this includes many in the Bush family. There are dungeons beneath the airport, and tunnels to outlying areas, but not to the extent rumored. The plan was for many planes to land, unload, and take off, with those transported to Denver shuttled off to the suburbs quickly. The plan was for an emergency evacuation of Washington, D.C., thence to Denver, during the last weeks before the pole shift. Thus the telling murals of catastrophe and martial law."
"Denver Rats"
http://poleshift.ning.com/profiles/blogs/zetatalk-newsletter-as-of-...
http://www.zetatalk.com/index/zeta497.htm

ZetaTalk (above on this page) states:
"The former New World Order leaders are thus no longer in control nor leading."
http://www.zetatalk.com/ning/31de2018.htm