The strongest quake was at 21:37 hours, being the first that led to this night-swarm, and reached 5.2 degrees. Subsequently, ten movements between 4.5 and 4.3 degrees were recorded in the area near the first epicenter (91 km west of Cobquecura), at a depth of 31-37 km. Some 1,500 farmers living on the slopes of the San Cristobal volcano refused to leave, despite being ordered to evacuate as the volcano spewed gas, sand and ash. Reiterating the evacuation order on Wednesday, first lady Rosario Murillo, a government spokeswoman, said "the situation of the volcano is unstable". 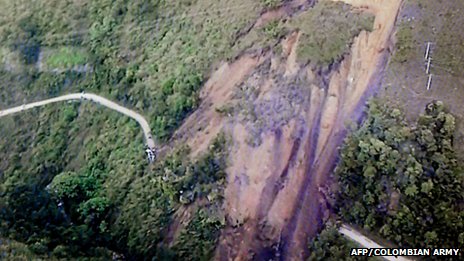 Rescue teams in Colombia have been searching for at least 25 people missing after a landslide cut off a road near the south-western city of Neiva.

Five people were killed in the accident, which happened on Saturday.

The Colombian authorities believe at least six cars are buried under tons of mud and rocks.

Hundreds of fire-fighters, paramedics and army troops have been sent to help the rescue operation in Huila province.

There are fears of a new landslide in the same area, along the road between the cities of Neiva and Florencia.

Operations will be suspended if the mountain slope becomes unstable, the authorities said. 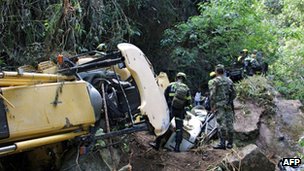 Several vehicles are trapped under the earth and rocks

One of the five victims was a heavy machine operator who was clearing the road from a previous landslide.

"It is a very difficult situation as the landslide was very big," said National Rescue Director Cesar Uruena.

"We will need many heavy machines to clear the road," Mr Uruena told RCN radio.

Rescue operations were suspended on Saturday night due to safety concerns for the teams involved in the operation. Flooding on the Coast: "30 years ago we see the Paraná not so high" The neighbors say Itatí, in Corrientes, which suffered a major flood in 1983. The river exceeded 8 meters yesterday, covered the coastal walkway and flooded roads.

Because Tuesday is the feast of the Virgin of Itatí and here is celebrated pomp. Because the brick can not keep losing adobe nor mandioqueros, your plants. For those who have not yet left their farms, will have to do from one moment to another. Because the estuary fat and then the water comes back also. For all that, in Paraná Itatí want the stops: yesterday touched 8.10 meters when its average height is a little over three. No one can not say that this flood is very similar to 1983, when the river overflowed and the flood came quick and brave.

"We thought we had reached the peak because the river was parked. But above continued to rise. The result is here: grows an inch every hour. 30 years ago we see the Paraná not so high, "a prefect and adds that you see there-the final leg of a roundabout is part of the green-coastal walk. Six feet deep is the rest: the gateway, the wall, flowers, lanterns. The most affected coastal populations are Ibiray and Abarapé Itatí. And although the water did not reach the old town, some homes that overlook the coast are flooded. In total, 103 people were 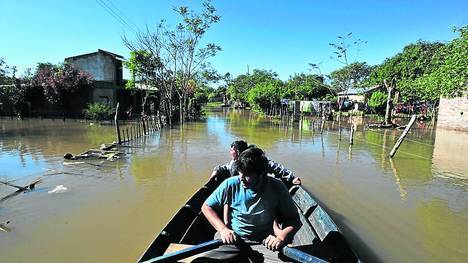 Chaco. The worst hit is the Isla del Cerrito, with 147 families evacuated, while in Puerto Vilelas are 71, 36 and Cologne Barranqueras Benitez 34.

The Ministry of Education enabled ten schools and annexes for families evacuated from the affected areas.

Many of the families were self-evacuated to the side of the routes before the rise of the river, although many others refuse to leave their homes, likewise being assisted by the Emergency Committee.

The field work carried out by the provincial government is to provide those who suffer from the advancing waters essential items such as blankets, cardboard sheets, blankets, food, bottled water and hygiene items.

Containment tasks are articulated between the Ministries of Social Development, Health and Education, who also added the areas of Civil Defense, Coast Guard, the Argentine Army and Provincial Water Administration (APA).

The affected counties are responsible for receptions and delivery demands of the items provided by the provincial government.

After participating in a meeting of the Emergency Committee, the head of the APA, Cristina Magnano, said "the flood is manageable values" and added that at 12 now the Parana, at the height of the Port of Barranqueras was at 6, 45 meters in growing.

The official said the operation Yacyretá "who is performing a handling water expenditures for the arrival of the peak is not as violent, which is likely, instead of having it on Sunday it in the day on Monday ".

The current trend indicates that the height in Puerto Barranqueras be located between 7.10 and 7.50 meters between Sunday 30 and Monday 1.

Guatemala: Sinking "swallows" of the floor of a house and four cars. 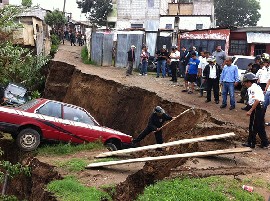 Part of an abandoned hovel and four vehicles fell this morning to a small ravine land sinking in the settlement Belize, near San Rafael IV, 18 capital area. Neighbors say undermines a stream of underground drains and cause this type of problem.

They spent five in the morning when he heard the noise caused by slipping on a converted parking area a few years ago. On site, located between the streets 13 and 14, there were about 50 vehicles, so people assume that the landslide was a direct result of weight on loose soil.

Two of the cars ended up in the bottom of the landslide of about 25 meters deep and 30 wide. Another two were in the same way but were finally "stuck" near the shore. A humble wooden house film, with only remains a guardian, lost part of area in one end.

"Ten years ago there were houses here, but it happened a collapse similar to today and one person died. Since then removed almost all the huts. The situation is caused by the drain current of the San Rafael Buenavista residential colony, which undermines the ground, "said the neighbor Berta Pacay.

Two of the cars were taken by people with ties and ropes to firm ground.

At the emergency site came Firefighters Volunteers and staff of the National Coordinator for Disaster Reduction (Conrad). Fortunately Ecuador: Chaquinal, where the earth moves and the risk is extreme
July 21, 2013 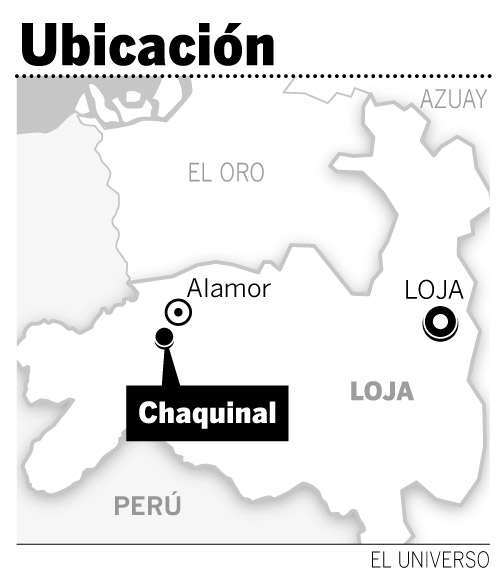 Griselda Zapata was in the backyard washing clothes outside on a dirt floor with large cracks, the sink match, the walls of the house separate from the beams and columns, cement staircase is now at ground level and broken blocks on the floor, lag than it was back wall.

She lives in constant fear for fear of it falling over the property and affecting any of his nine grandchildren living there with her husband, three sons and daughters. Since last month, and before the crash risk of the house, the 17 members of these families at night going to sleep in a canvas tent, nearly four meters in diameter, located in the center of Chaquinal, the parish where live.

"I do not know what to do, I lost my house in my parish where I have lived all my life, where my children have grown up, the family ... homeless stay is the worst, with my problem, I operated on the thyroid, "he laments.

Your home is destroyed since last June 7. That day, the team that builds concrete road 86 km in the cantons Puyango, Pinal, and Zapotillo Celica in Loja, made a detonation.

Nearby, the driver Manuel Rivera was out of his house, made by him and his taste, with nine windows and two floors. It was the legacy he wanted to leave his two children, but it is cracked. Construction began a year ago after selling its Chevrolet Corsa and make a loan.

A Rivera is concerned that the house can not withstand the effects incurred in the coming winter.

The house is next to the school José Miguel Zarate, which closed in June by subsidence and cracks where a child might fall. His students now study at school the place, divided into two classroom courses.

Previously, the church had been demolished because land settlements jeopardized the faithful. Nearby is the main field Chaquinal cracked and stands with large openings. On the street trenches are hoses that come to the surface, after replacing the network collapsed and rigid tubes, broken by landslides. 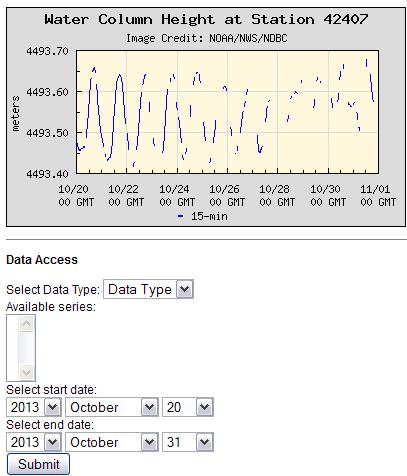 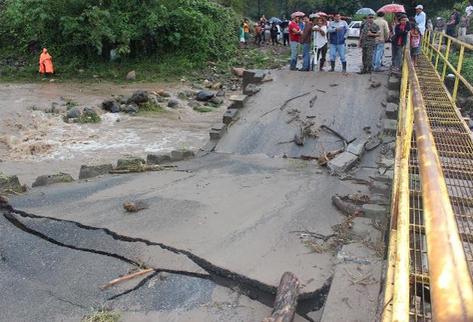 And a Sinkhole in Roosevelt Driveway in Guatemala City: Rivers cause floods in Santa Rosa, Huehuetenango and Peten: 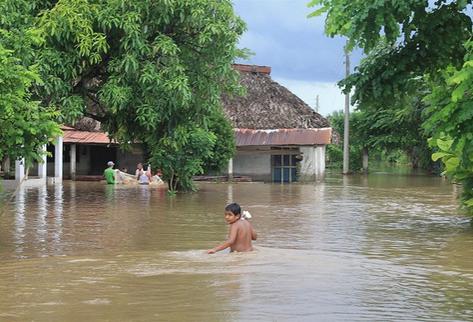 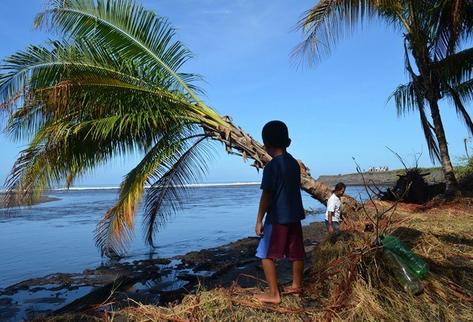