Well, terrorism is a threat, understood. But we had bombs etc. in the past, too, and I don't remember we had a global travel alert before? [and from another]http://edition.cnn.com/2015/11/23/politics/state-worldwide-travel-a... The United States issued a worldwide travel alert for Americans amid concerns that terror groups and individuals plan more attacks after the Paris massacres. The department said that terrorist attacks remain likely as ISIS members return from Iraq and Syria. An "Alert" is time-limited, often for 90 days, at which it can be reviewed. An alert is not necessarily stronger or weaker than a caution. The most recent worldwide travel alert was issued in December 2014, and prior to that in August 2013, September 2011, and May 2011. [and from another]http://pix11.com/2015/11/23/worldwide-travel-alert-state-department... The State Department issued a rare worldwide travel alert for U.S. citizens amid several terror threats overseas. Authorities believe the likelihood of terror attacks will continue as members of ISIL/Da’esh return from Syria and Iraq.  Additionally, there is a continuing threat from unaffiliated persons planning attacks inspired by major terrorist organizations but conducted on an individual basis.  Extremists have targeted large sporting events, theatres, open markets, and aviation services.  In the past year, there have been multiple attacks in France, Nigeria, Denmark, Turkey, and Mali.  ISIL/Da’esh has claimed responsibility for the bombing of a Russian airliner in Egypt. [and from another]https://www.facebook.com/travelgov/posts/10151605755073149 Worldwide Travel Alert. The Department of State alerts U.S. citizens to the continued potential for terrorist attacks, particularly in the Middle East and North Africa, and possibly occurring in or emanating from the Arabian Peninsula. Current information suggests that al-Qa’ida and affiliated organizations continue to plan terrorist attacks both in the region and beyond, and that they may focus efforts to conduct attacks in the period between now and the end of August. This Travel Alert expires on August 31, 2013. [and from another] http://www.huffingtonpost.com/2014/12/19/state-department-worldwide...The State Department is warning Americans traveling abroad to be extra cautious over the holidays. In a worldwide travel alert issued Friday, the department says an attack this week in Australia highlights the need to be vigilant. A gunman in Sydney took 17 people hostage at a café on Monday. The siege ended 16 hours later in a barrage of gunfire that left two hostages and the Iranian-born gunman dead. The travel alert lasts into March. 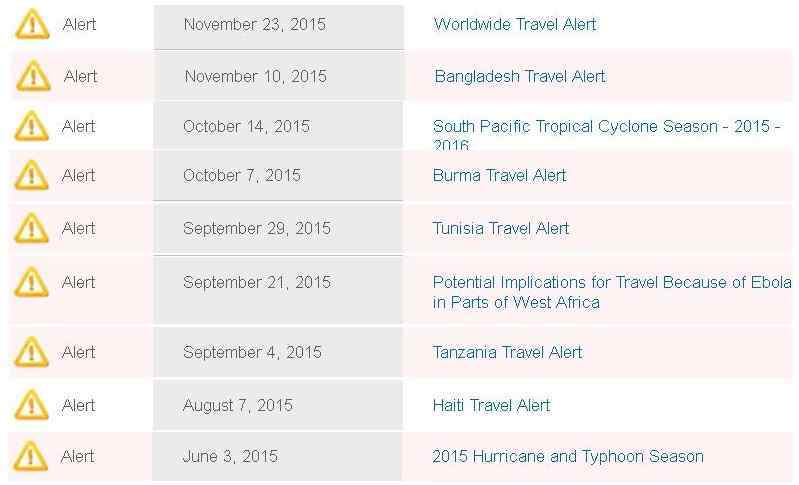 Most State Department alerts are issued for local threats, within a country or region. Worldwide alerts are reserved for terror attacks where the sponsoring country, or presumed sponsoring country, reaches out far beyond its borders. In September, 2011 it was of course 19 Arabs with box cutters that qualified that alert. In August 2013 al-Qa’ida chatter indicated intention to strike a broad area outside of the Arabian Peninsula. In December, 2014 an Iranian born terrorist attacked a café in Australia. Now in November, 2015 the alert is based on ISIS threats as well as the very real attack in Paris.

This most recent travel alert is also based on the presumed soda can bomb, now claimed to be the cause of the downing of the Russian A321 flight. We have pointed out that EMP was responsible, else how could the plane have limped half-way across the Sinai on its way to Cairo. Do bombs go off that slowly? To what degree is this travel alert attempting to limit holiday travel by American’s, during a time when EMP is on the increase and the announcement re Nibiru may incite migration panic worldwide? It has everything to do with those issues, but will not be admitted. The airline and travel industry profits be damned.