I found something interesting that I wondered if the Zetas may want to comment on.  Pope Francis made some recent comments to Christians to prepare for the apocalypse, mentioning "cosmic cataclysms" and "the sun will be darkened", basically encouraging an STO response during this time.  It was not very specific other than that but noteworthy none the less.  Check out the article below or the Pope's quotes which I copied/pasted.  [and from another] http://yournewswire.com/pope-francis-tells-christians-prepare-for-t...  November 17, 2015. Commenting on Sunday’s Scripture readings, the Pope said that Jesus’ preaching about the end of the world contains “apocalyptic elements, like war, famine, and cosmic catastrophes.” “In those days,” Francis repeated, “the sun will be darkened, and the moon will not give its light, and the stars will be falling from the sky, and the powers in the heavens will be shaken.” [and from another] http://www.breitbart.com/big-government/2015/11/15/paris-pope-franc...  November 15, 2015. Two days after the horrendous jihadist attacks in Paris, Pope Francis preached about the “end times,” encouraging his hearers to be vigilant and ready at any moment to meet God face to face. [and from another]http://www.prophecy.news/2015-11-18-pope-francis-warns-about-the-en...  “We are called to live the present,” Francis said, “but always ready to meet God whenever he may call.” The Pope also cautioned against unhealthy speculations about when the End Times will occur. Psychics and horoscopes distract us from what is important in the here and now, according to the Pope. After all, according to a widely referenced Bible verse, Mark 13:32, not even the son of Man knows when the End Times will happen. That is a piece of knowledge reserved for God the Father alone. [and from another]  November 29, 2014.http://www.ibtimes.co.in/pope-francis-says-apocalypse-inevitable-as...  Pope Francis, the leader of 1.2 billion Roman Catholics around the world, talked about the Apocalypse in his Thanksgiving Day address at St. Peter's Square.  The Christian leader said that the end of the world was inevitable because there was so much sin, adding that questions about the Apocalypse were ancient. The thought of the world "passing away" had travelled down through ages and though the Church knew no answers to when it shall happen, he confirmed that an end was unavoidable. The Pope also added that the apocalypse will not be the end; it will rather be a "transformation" to a new, more beautiful universe. 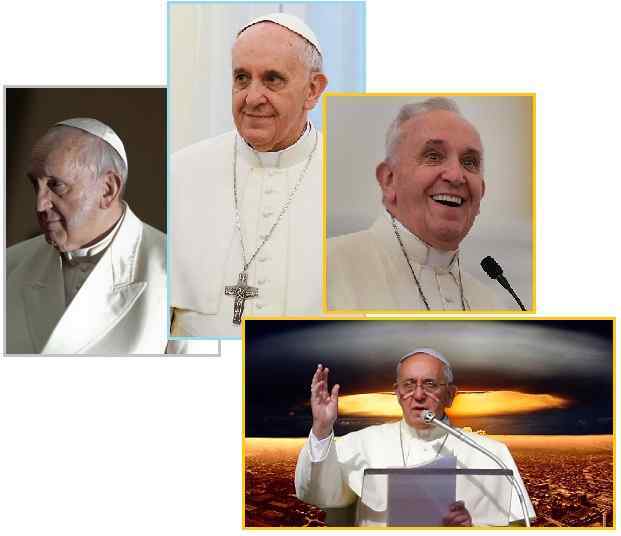 There is a distinct change in the speech on the Apocalypse that Pope Francis gave in November, 2014 and the most recent speech in November, 2015. In 2014 he referred to the Apocalypse in vague terms, a time when mankind’s world full of sin and travails will pass away but the world will “transform” into a better place. This is of course the Transformation we have referred to within ZetaTalk, which is ongoing now as the Service-to-Self are steadily removed from the Earth and only those firmly in the Service-to-Other are allowed to remain and reincarnate on Earth.

In 2015 he referenced “cosmic catastrophe”, the Sun being darkened, the Moon likewise darkened. This is of course the time when the vast debris filled tail of Nibiru stands between the Earth and the Sun, during the Last Weeks. The reference to stars falling from the sky is the hour of the crustal shift, where all in the skies above will be in motion, and also debris in the tail of Nibiru plunging through the atmosphere, alit, as bolides. As we have regularly emphasized, the date is not to be known by man, and the Pope emphasized that too in 2015. Live in the moment and prepare to meet your maker, is the message.

Why has the Pope switched to being specific in his advice to the masses? What changed during the year  between 2014 and 2015? The announcement will not be delayed another year. He knows this. He also knows that when the announcement happens, the noise from many elements may drown out his words, his chance to influence the masses. There will be opportunists clamoring to lead and control those in panic, migrants moving in all directions seeking to reach what they presume to be safe ground or a promised land. Most of this activity will be under false leadership, looking to grab the stage for self-aggrandizement or personal profit. Thus, Pope Francis speaks now, before the announcement but close enough to that moment that his words will be remembered.