This looks like a major lean to me. Could the Zetas say something about this? [and from another] http://www.thebigwobble.org/2017/12/its-weather-madness-on-both-sid... It's weather madness on both sides of the Atlantic as parts the US records lowest cold; parts of Europe record highest warmth in living memory.   Weather madness hits the Northern Hemisphere as extremes are recorded on both sides of the Atlantic. While parts of the US are colder than Mars and are expected to have the coldest New Year’s Eve in living memory Holland is enjoying its warmest New Year’s Eve in living memory. [and from another] https://www.wunderground.com/cat6/new-years-freeze-out-it-can-still... Departure of surface temperature from average for December 28, 2017. Areas in red and orange are not necessarily warm, but they are above the average for this time of year at that location. While the Northeast U.S. was experiencing near-record cold, the globe as a whole was 0.5 °C above average. 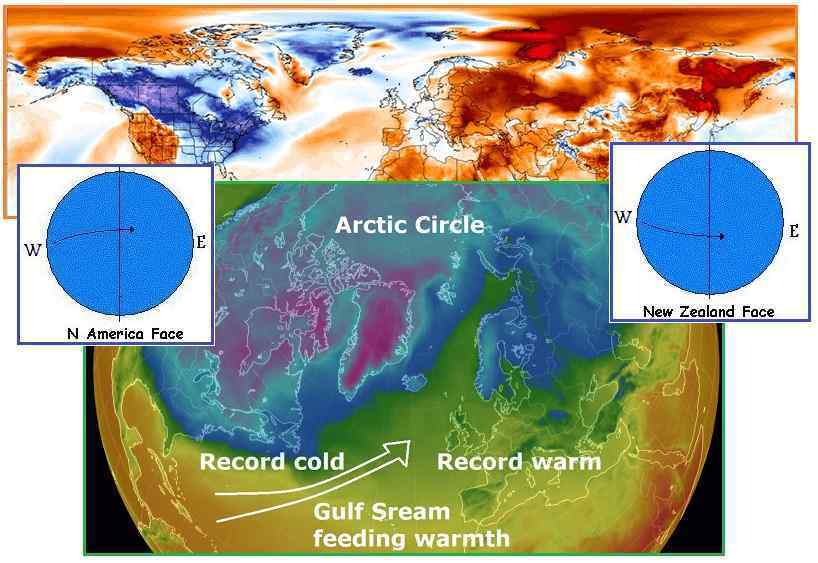 Thus where Siberia would normally be pushed away to where it would receive less sunlight, it is now facing the Sun more directly, thus warmer. Where the N American Continent would normally be where the Earth bounces back from the Polar Push, in a more southern latitude, it lingers near the Arctic where it has been positioned during the lean into opposition.  The effects of the Polar Push have, temporarily, been reversed. These opposition alignments are always temporary, however, so the N American continent will soon find its temps well above average.