Is Trump about to be impeached? [and from another] http://insider.foxnews.com/2017/05/17/greg-gutfeld-donald-trump-imp...Democrats "defending Obama's errors" are now in a pro-impeachment hysteria over President Trump. No president has been hated by people in Washington more than Trump. [and from another] http://www.cbsnews.com/news/doj-appoints-special-counsel-in-wake-of... Deputy Attorney General Rod Rosenstein has appointed former FBI Director Robert Mueller to serve as special counsel to oversee the previously confirmed FBI investigation of Russian efforts to influence the 2016 presidential election and related matters. It was revealed the Comey had written a memo alleging that Mr. Trump had asked him to back off from investigation former National Security Adviser Michael Flynn. The memo allegedly says that the president said, in a private conversation with Comey at the White House, "I hope you can see your way clear to letting this go, to letting Flynn go. He is a good guy. I hope you can let this go." [and from another] http://www.miamiherald.com/news/politics-government/article15114970... Flynn’s rejection of a military operation that had been months in the making raises questions about what other key decisions he might have influenced during the slightly more than three weeks he was Trump’s national security adviser, and the months he was Trump’s primary campaign foreign-policy adviser. Even three months after he was fired, for lying to Vice President Mike Pence about a call with Russian Ambassador Sergey Kislyak, his role in the White House resonates. But it is his paid work on Turkey’s behalf that offers the clearest evidence of his role as a foreign agent – and of his legal problems, since he did not declare his foreign agent status till weeks after he’d left the Trump administration. According to Flynn’s paperwork, he was paid $530,000 for work that “could be consrued to have principally benefited the Republic of Turkey.” Under the Foreign Agent Registration Act, U.S. citizens who lobby on behalf of foreign governments or political entities must disclose their work to the Justice Department within 10 days. [and from another] https://billofrightsinstitute.org/educate/educator-resources/lesson... Independent Counsel Kenneth Starr was investigating Clinton’s pre-presidential financial dealings, but could prove no wrongdoing. In his deposition, Clinton denied under oath any involvement with Lewinsky. This denial caught Starr’s attention; Starr suspected the president had committed perjury and obstructed justice in the Jones trial. Some people believe that Clinton was impeached for political reasons, not for constitutional reasons. [and from another] http://www.denverpost.com/2017/03/02/federal-workers-layoffs-inevit... Federal workers are growing increasingly anxious at the prospect of massive budget cuts President Donald Trump proposed this week that would pave the way for increased military spending. The president said he’ll call for $54 billion in reductions to offset new spending for the Pentagon, and it should not come from veterans’ programs, law enforcement or entitlement programs, the biggest drivers of federal spending. The math seems clear: To shrink government by that much, layoffs are inevitable. The State Department also could be in line for a big reduction, which some estimates peg at 37 percent. 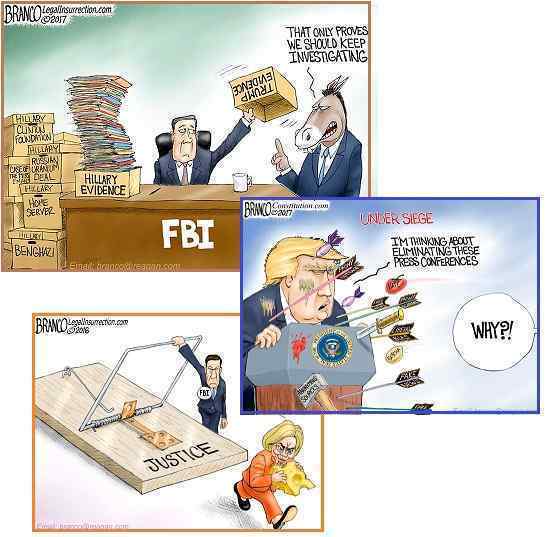 Despite what might be considered blunders by a politically inexperienced Trump, he will not be impeached. Despite the frenzy among those in the Hillary crowd to somehow remove Trump, it will not reach that level, as Trump has committed no crime. Bill Clinton lied under oath, which is a crime, but evaded being removed from office. Nixon had committed crimes during the Watergate affair, as the tapes he himself made proved, but he resigned before being impeached.  The impeachment of unpopular President Andrew Johnson was also unsuccessful in 1868, though the law was on the side of impeachment here too. Meanwhile, Trump haters mutter the impeachment word as often as possible.

The frenzy to remove Trump from power has many sources. The criminal Clinton cabal has been double dealing the public for years, and money buys a lot of allegiances. If the public had been privy to the secret trials conducted by Dunford last year, they would have been horrified. Selling 20% of the US uranium rights for $145 million while Secretary of State was just the tip of the iceberg. The Clinton Foundation, wherein only 5% went to actual charities, was a massive money laundering machine. Hillary is under house arrest now, and except for rare and well controlled public appearances is out of the running, permanently. Meanwhile, Hillary cronies spread unfounded rumors about Trump.

The second impetus to Trump’s removal from power comes from the Deep State - entrenched bureaucrats who fear losing their jobs. Trump has made no secret of his intentions to reduce the size of the federal government, and panic is palpable in some of the targeted agencies. The reduction in the highly politicized State Department, which had been packed with Hillary cronies over the years, stands as an example. Eliminating civil servant jobs is difficult as they are protected by law, but one sure way is a budget cut wherein only those with seniority remain. Eliminating a group, or department, is another means. Meanwhile, the desperate leak info to the press.

Then there are foreign entities who do not see Trump firmly in hand. NATO members fear Trump’s agenda. They are in shock at his insistence that NATO members pay their fair share and are in shock at Trump’s alliance with Russia in Syria while fighting ISIS. Turkey is apoplectic about this, as despite his corruption in brokering oil for ISIS, Erdogan assumed as a NATO member he could demand cooperation. Erdogan fears the Kurds will gain independence and take land from Turkey, a process which is frankly inevitable under Trump. Meanwhile, they attempt to smear Trump in false treason or pedophilia charges.

If all this were not enough ammunition to attack an independent minded and determined Trump, the issue of a potential Nibiru announcement has roused the most intense opposition from both sides of the aisle. The cover-up over Nibiru is primarily kept in place by the wealthy and politically powerful, who benefit from an ignorant public. They fear losing their position on the top of the pile - the public no longer being kept in check by an overwhelmed police force, and a starving and angry public overwhelming their secure enclaves. Meanwhile, like the Soros agenda, they fund and back any anti-Trump endeavor that has legs.

Comment by Cameron W Coates on May 19, 2017 at 7:47pm
Does the "related matters" part of the special council appointment mean that the Clinton Secret Server investigation will get more attention?