The Schumann Resonance rising as our DNA transforms? [and from another] http://www.trinfinity8.com/why-is-earths-schumann-resonance-acceler... The Ancient Indian Rishis called 7.83 Hz the frequency of OM. It also happens to be Mother Earth’s natural heartbeat rhythm, known as the “Schumann Resonance.” In June 2014 that apparently changed. Monitors at the Russian Space Observing System showed a sudden spike in activity to around 8.5 Hz. Since then, they have recorded days where the Schumann accelerated as fast as 16.5 Hz. [and from another] https://en.wikipedia.org/wiki/Schumann_resonances In the normal mode descriptions of Schumann resonances, the fundamental mode is a standing wave in the Earth–ionosphere cavity with a wavelength equal to the circumference of the Earth. This lowest-frequency (and highest-intensity) mode of the Schumann resonance occurs at a frequency of approximately 7.83 Hz, but this frequency can vary slightly from a variety of factors. 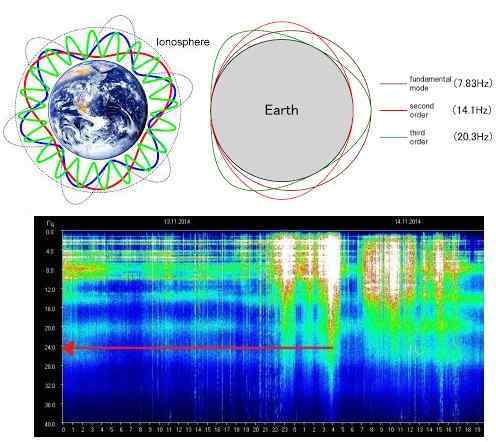 The Schumann Resonance is an Earth hum, caused by a broad vibration of the Earth within its own magnetic field. Since magnetons, and the electrons that chose to flow with them, are pouring out of the Earth’s magnetic N Pole and arriving at the Earth’s magnetic S Pole, there is a tension at the fat sides of the globe, around the Equator, of what can be described as a pull and push. Magnetons want to escape there, but are pulled back, causing this vibration. This is why the base wavelength of the resonance is the circumference of the Earth.

Why is this becoming irregular at times, lately? There is a battle in the Earth’s magnetosphere, with the Earth wanting to align with the Sun but also being assaulted by a magnetic blast from Nibiru. Thus at times with a magneton overload, at other times with a throbbing pull to this or that side of the globe as the magnetons within the Earth, in the process of flowing through, are either in excess or of a dearth. How will this discord affect humans and other life who have become accustomed to the 7.83 Hz? Headaches, being dizzy or fatigued, or at other times irritable and energetic. None of this has long term health effects and all this will in time pass after the Pole Shift.