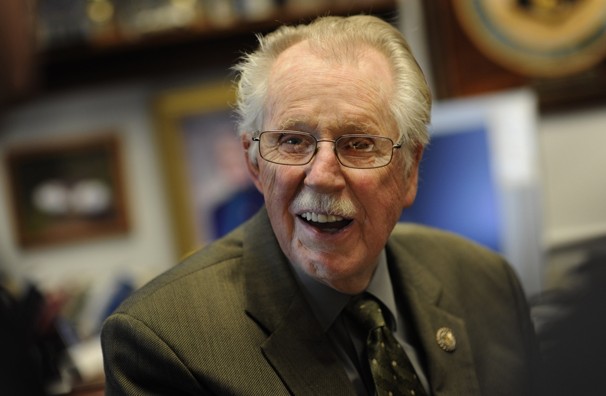 So not all politicians are in it just for themselves: long time survivalist Roscoe Bartlett urges the more than 80% of Americans who live in urban areas to relocate while the sun still shines before "an emergency" situation leaves the population without food, water and power causing a "high probability" of civil unrest in the cities.

Deep in the West Virginia woods, in a small cabin powered by the sun and the wind, a bespectacled, white-haired man is giving a video tour of his basement, describing techniques for the long-term preservation of food in case of “an emergency.”

“We don’t really think of those today, because it’s so convenient to go to the supermarket,” he cautions. “But you know, you’re planning because the supermarket may not always be there.”

The electrical grid could fail tomorrow, he frequently warns. Food would disappear from the shelves. Water would no longer flow from the pipes. Money might become worthless. People could turn on each other, and millions would die.

Such concerns are typical among “survivalists,” a loose national movement of individuals who advocate self-sufficiency in the face of natural or man-made disasters, gathering online or in person to discuss the best ways to prepare for the worst.

What is atypical is that the owner of this cabin is Roscoe G. Bartlett, the longtime Republican congressman from Maryland. Over the past two decades, he has developed a following as one of the country’s premier proponents of preparedness against impending doom, even urging the more than 80 percent of Americans who live in urban areas to relocate.

“There are a number of events that could create a situation in the cities where civil unrest would be a very high probability,” Bartlett predicts in “Urban Danger,” a documentary that features the cabin tour. “And I think that those who can and those who understand need to take advantage of the opportunity when these winds of strife are not blowing, to move their families.”

Comment by Kris H on August 22, 2012 at 2:33am
Can the Zetas comment on the motives and influence of the Tea Party movement? [and from another] The zetas have certainly noticed the rise of the "tea party", which appears to be made up mostly of dissaffected Republicans who feel their place in the world threatened by the Obama administration. Also on the rise are so-called "Christian militias" and now a call for the Oklahoma state legislature to establish a "state militia" to defend Oklahomans from the "tyrannical federal government". Why did we not see this when there truly WAS such a threat, from the likes of Cheney and the Bush clones? Is it due to the sixth sense that people have that something is definitely wrong now, whether due to the earth changes or to the obvious fraud that's being uncovered day after day (such as the Goldman Sachs deals yesterday)? And why are the proponents of these right-wing reactions so stubborn about attributing these things to their true causes?

SOZT. The Tea Party movement is a conglomeration of those who were deposed when Obama took office and the Congress had a Democratic majority. Step back a couple years and you see Bush and Cheney in office with a Republican majority. Separation of church and state was being undone. The wealthy were having their tax burden eased while the poor were having their burdens increased. Those who cling to religious dogma are rule oriented, and this is a trait of the Service-to-Self or those leaning in that direction. Those who enjoy getting rich at the expense of others are likewise Service-to-Self. Thus, to ask them to see the error of their ways is antithetical. This is their way! EOZT

The threatened future is now for millions of people worldwide.  It is not wise to depend on any government for anything when the going gets really rough.  Young people in Iran are showing us what is possible when the need is so great and the response of government is inadequate.

Young Iranians Step Up With Their Own Quake Relief

VARZAGHAN, Iran — As their caravan of private cars drove north along the Tehran-Tabriz highway, following the five trucks they had filled up with relief goods for the victims of the deadly double earthquake that struck northern Iran this month, a group of young Iranians — a mix of hipsters, off-road motor club members and children of affluent families — felt like rebels with a cause.

None of the people in the cars seemed to know exactly how it had begun, or to remember how they all met during the past sleepless days. They became friends while standing in long lines in the parking lot of a privately owned building, passing along boxes filled with blankets and toys.

Energized by anger over widespread accusations that Iran’s official relief organizations were not adequately helping survivors, they, and hundreds of others, spontaneously organized a 48-hour charity effort using text messages, Facebook and phone calls to gather money and goods.

But instead of handing over their collection to the Iranian Red Crescent Society — which is close to the government — as the authorities had asked in the state media, these youths were determined to transport it themselves to the most remote hill villages ravaged by the earthquakes, which struck a rural Turkish-speaking part of the country. More than 300 people were killed and thousands left homeless.

“We are getting this support because people trust us to bring the aid directly to the victims,” said Pouria, 31, who rode in the passenger’s seat of his friend’s sport utility vehicle.... http://www.nytimes.com/2012/08/21/world/middleeast/young-iranians-b...