I was wondering if the Zetas would care to comment on the recent change of the prime minster here in Australia? Is this because the STO side of the party has taken the lead, or is it a part of the STS schemes knowing the announcement is only a stone throw away? And if so, what schemes do they have planned here? [and from another]http://www.theguardian.com/australia-news/live/2015/sep/14/tony-abb...  One minute you are in the office, and the next you are not.  [and from another] http://www.theguardian.com/australia-news/2015/sep/14/malcolm-turnb...  Malcolm Turnbull has promised to respect the Australian people’s intelligence with a new style of leadership as he declared he would challenge Tony Abbott for the Liberal leadership. Turnbull accused the prime minister of being unable to provide the necessary economic leadership, and urged colleagues to support a new “style of leadership that respects the people’s intelligence” instead of sloganeering. Abbott said he would fight the leadership challenge because Australia needed “strong and stable government” and the prime ministership was “not a prize or a plaything to be demanded”. [and from another] http://www.theguardian.com/politics/2015/sep/12/jeremy-corbyn-wins-...  Election of backbench MP and anti-war campaigner means party now has one of the most leftwing, anti-establishment leaders in its history. Jeremy Corbyn has been elected leader of the British Labour party, in a stunning first-round victory that dwarfed even the mandate for Tony Blair in 1994. Minutes after his victory, Corbyn said the message is that people are “fed up with the injustice and the inequality” of Britain. Corbyn will now set about apologizing for the Iraq war and strongly opposing cuts to public services and welfare. He began his leadership on Saturday with a speech to a rally in London in support of refugees.  [and from another] http://www.huffingtonpost.com/entry/bernie-sanders-jeremy-corbyn-de...  Bernie Sanders hailed the election of Jeremy Corbyn to the leadership of the United Kingdom’s Labour Party as a promising development in the global fight against inequality. anders’ appreciation of Corbyn is mutual. Corbyn’s upset election as head of Labour, which makes him the de facto opposition leader in the U.K. parliament, has drawn comparisons to Sanders’ rise in the American political landscape. Like Corbyn, Sanders has achieved unexpected popularity by proposing dramatic solutions to end income inequality and reform the political process. The two left-leaning legislators also share an unglamorous demeanor. 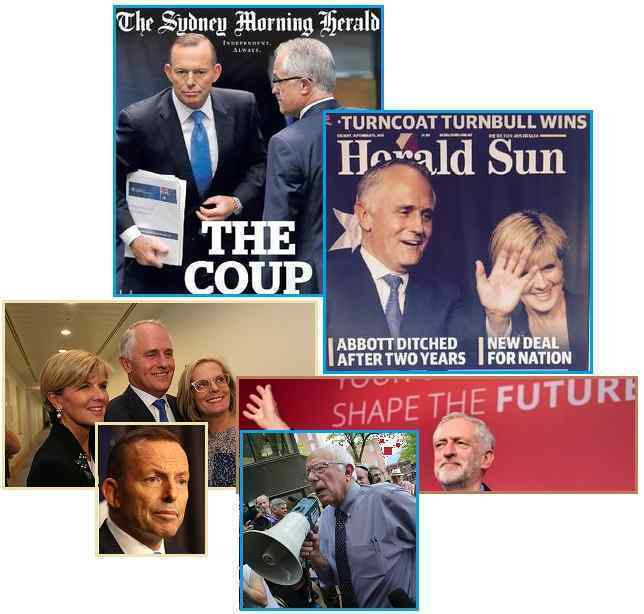 In an era of election fraud, where the Scotland independence vote was stolen and Cameron hardly elected as claimed, what do these internal parliamentary leadership changes within the Commonwealth mean? Parliamentary votes are swayed by bribery and coercion, not changed in the ballot box, as outright theft would be obvious. The mood among the elected Parliament members had changed. In other countries this change in mood is detectible also. Netanyahu stole the latest election in outright and rather obvious fraud, but now finds resistance within his own country to his dictates. In the US, Sanders and Trump are shaking an establishment that anticipated either a Clinton or Bush to emerge the winner.

The conservative establishment, used to supporting their cronies over the rights of the many, is finding they can no longer enforce control. Wealth and the influence wealth brings bought control, as for instance an election could be rigged if enough money crossed sufficient palms, or an official could be convinced to look the other way if the inducement was sufficient. If money did not pave the way, then subtle threats would be used, peppered with an actual “suicide” or maiming of a loved one as an inducement. What was never expected, among the conservatives assuming they are in political control, was a rebellion of the heart!

What is a rebellion but a movement? If one person takes action, takes a stance, this is a hero, who may be killed or punished because of his actions. But if the group taking action is so large, so vast, that threats and bribery are no longer effective, no longer possible en mass, then those formerly in power find themselves assaulted by a tsunami. The revolution cannot be stopped. Clinton finds herself facing such a tsunami as the public embraces the obvious sincerity of Sanders vs Clinton’s entitlement expectations.  Netanyahu has become impotent to stop the Iran vote in the US, or the movement in Europe to support a Palestinian state. It is the spiritual Transformation we outlined at the start of the ZetaTalk sage.