An unusual archaeological discovery has been made in Nazca, Peru. Is this a genuine mummified alien body or an elaborate hoax? [and from another] This Changes Everything! [and from another] Only on Gaia.com! - YouTube [and from another] Alien? Body Discovered in Peru, Currently Being Investigated http://www.texasufosightings.com/buzz/alien-body-discovered-in-peru... According to a recent GAIA special report, the mummified remains of a strange humanoid or alien body have been found in Nazca, Peru. UFO researcher Jaime Massan originally reached out to GAIA with the discovery, who then hired a team of researchers and scientists to examine the body. Although the verdict is still out about whether or not the body is alien, samples have been taken and more should be revealed soon. So far, the scientists working with GAIA do not believe the body to be human, due to its highly perturbed skull, three long fingers, and absence of ears. Another odd aspect about the body is that none of its organs had been removed, a practice typical with human mummification. [and from another] https://youtu.be/9t-0K42G0MU [and from another] A new anomalous discovery has been unearthed in Peru. Join Gaia's ongoing investigation and decide for yourself if this is proof of a non-human species. https://m.youtube.com/watch?time_continue=322&v=xZPDhPeQnRY 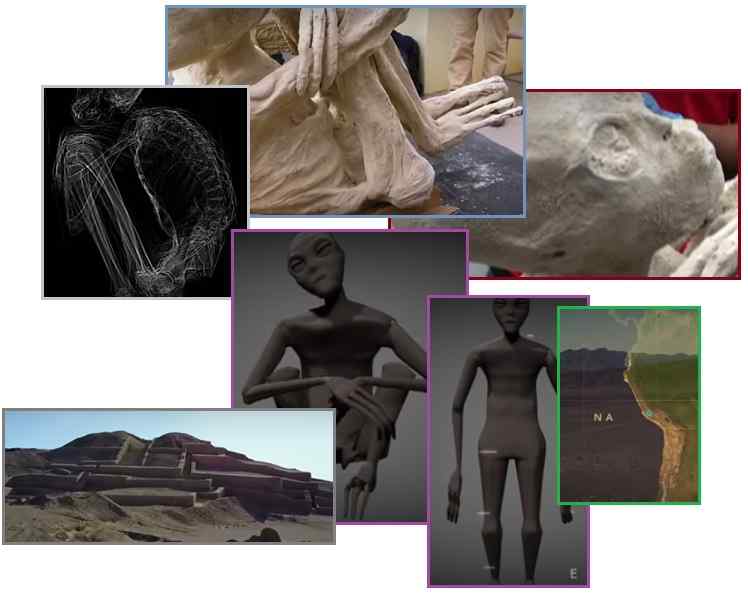 This intact mummy, found in the dry caves of Peru, is genuine and almost 100% alien in its DNA. Affection developed in the past between the visitors and humans, so an occasional hybrid survived to pass along some human DNA. But the obvious characteristics of an alien body – 3 long fingers, long arms, long toes, lack of external ears, and large eyes – are definitive. Such discoveries, on the increase over the past few years, are the result of a guided search, where contactees are guided to the location. The Awakening to the alien presence is being expedited.

“I couldn’t find one piece of that (white mummy) body that looked like it was put together (with hoax glue). There are certain marks on the bone of how that would happen.’”
- Mary Jesse, M.D., Asst. Prof., Radiology-Diagnostics, School of Medicine, Univ. of Colorado-Denver

1)  if the bone is fake, it has a different lightness to it in the CATSCANS. It looks different than the other bones.

2)  There are also markings that would mean the bones could be fake.  There wasn’t any of that.

3)  Also, the hand is a pretty complicated mechanism and she was explaining that if someone really replicated this  3-fingered hand, they would have to know so much about anatomy that they would have to be doing that for a living. She said they have every little tiny  piece of that hand in there, like even to the tip, which is just like a human finger (except the long 3-fingered hand at Nazca has 6 joints). The tip is just a little bone that sits at the end of your finger. She was just blown away by the fact that she couldn’t really find something that said to her this could be fake.”