This little article sat me down, hard. Can you and/or the Zetas comment on this next interesting “deed for humanity” by our friend, Mark Zuckerberg? It sounds really good on paper, helping in disasters and all, but I smell an insidious way to track people. I suspect we all know what his intentions are (as it tracks movements of people in real time), but having you all comment will expose them more to the masses by having this on poleshift.ning and picked up by search engines. This is pretty slick on the elite’s part. [and from another] Some think this is a spy machine. [and from another] http://www.reuters.com/article/us-global-technology-disasters-idUSK...  Facebook launches disaster maps to help aid workers save lives. Facebook launched disaster maps - an initiative aimed at helping humanitarian organizations save lives in emergencies. [and from another] http://mashable.com/2017/06/07/facebook-disaster-maps-humanitarian-...  The company that it's launching a new product called "disaster maps," using aggregated, anonymized Facebook data in disaster areas to deliver crucial information to aid organizations during and after crises. Facebook is currently beta testing the product with three organizations: the World Food Programme, UNICEF, and the International Federation of Red Cross and Red Crescent Societies (IFRC). Through disaster maps, researchers are currently sharing three types of information with these organizations. The first taps into Facebook's widely recognized social good product, Safety Check, offering information on where people are checking in safe. This shows how people are using the platform in a disaster. Facebook is also sharing data on location density—where people are located before, during, and after a disaster relative to where you would expect them to be.  The third type of information they're focusing on is the direction in which people are moving. It's important to know if people are evacuating north, south, east, or west, so organizations know where to send food, water, and medicine. It could also pinpoint the location of roads, and whether they're congested and should be avoided in rescue efforts. 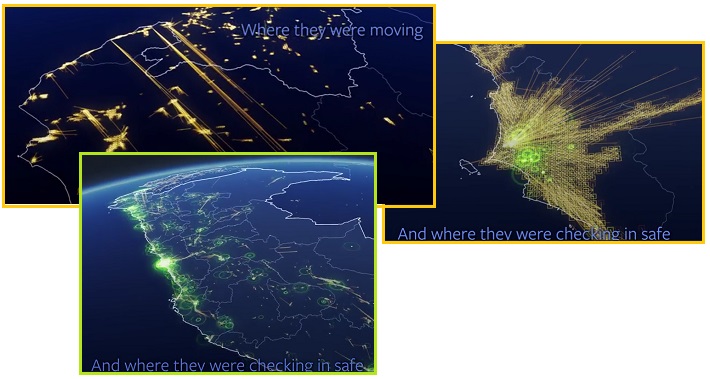 Russia was not allowed to launch satellites that would spy on migrants. In like manner, the Council of Worlds slapped Zuckerberg down in 2016 over his ambitions to control survivors in Africa with his drone based Internet. He is now trying to be covert. His cover is to masquerade as an assist to disaster recovery providers. Zukerberg is hardly a humanitarian. As a member of the elite he wishes to limit and control the starving masses after the Pole Shift, to enslave them, and to eliminate those who will not be useful to he and his ilk. He seeks information.

Look at what is to be learned!  He would learn where survivors are grouped, their “density”, where they are moving, where they feel safe and are setting up new homes. For the elite, who wish to eliminate certain segments of the population, whom they consider trouble makers or worthless as workers, this allows a pointed assassination campaign. Poisoned food or water, or self-limiting diseases such as infections, would be prime tools in such a campaign. If the density of survivors is to be limited, knowing what routes they are using can be targeted to divert survivors into smaller enclaves. This allows the elite to enslave these smaller groups, and to capture and relocate them later.

Where Zuckerberg feels he has smugly gotten around the Council of Worlds objections, he makes a number of assumptions. First, that the Internet, in particular his FaceBook application, will be functional. Those communication routes used by the survivors and aid agencies genuinely concerned about helping them will function, but FaceBook will not. Second, the endeavors to poison survivor groups will fail, in a thousand different ways. Third, after losing track of the migrants, he will not be able to recover their locations or their direction, even if they move toward elite enclaves.  True karma awaits.