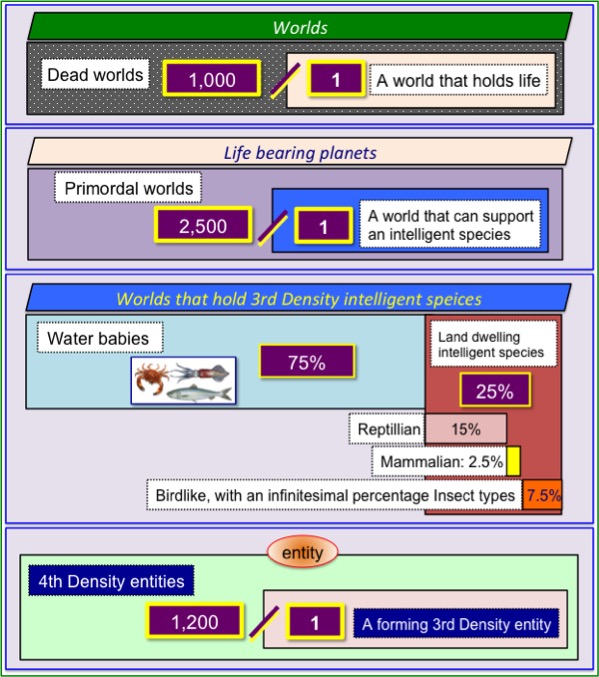 If one were to take a census on intelligent life in the part of the Universe the Earth goes around in, the results would probably shock humans. As entities in higher densities, 5th and above, have mobility and often go where duty calls, they may be wholly absent or present in great numbers, depending. Due to the Transformation, the Earth is positively swarming with such attention at the present time. Therefore, to give a realistic picture, we will describe 2nd, 3rd, and 4th Density percentages only.

On a world by world basis there are about 1,000 dead worlds for every one that holds life. Humans are familiar enough with their surroundings to understand conditions on other planets, and if anything, would be surprised at the percentage capable of life. Not every life bearing planet sustains life that can develop to the level required for conscious and intelligent thought. There are about 2,500 primordial worlds for every one that can support an intelligent species. Your Earth, for instance, had many such species with this potential. Of these worlds that hold 3rd Density intelligent species, the vast majority, perhaps 75%, are water babies, as the vast majority of habitable planets are essentially water planets. These species may be crablike, fishlike, squidlike, or formed like almost any of your ocean inhabitants - an almost infinite variety.

Of the worlds that sustain land dwelling intelligent species, the greater share, just under 60%, are reptilian. Reptilian life forms appear first, and thus better their percentages. A minority are mammalian, above 10%, but whenever these life forms are a candidate they beat out all other candidates as mammalian existence is highly interactive and thus a good spiritual schoolyard for forming entities. The remaining land dwelling 3rd Density species range between birdlike or insect types, the latter more prevalent at about 30%. Since 3rd Density is a short stop, required only for the orientation lesson, 4th Density entities are much more prevalent. There are approximately 1,200 4th Density entities for every forming 3rd Density entity. 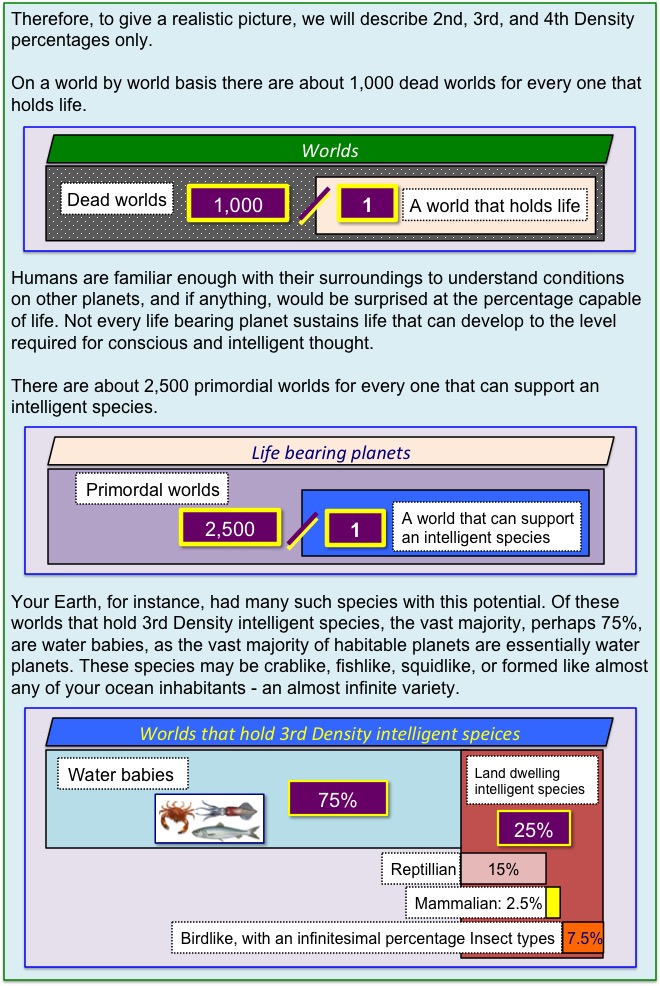 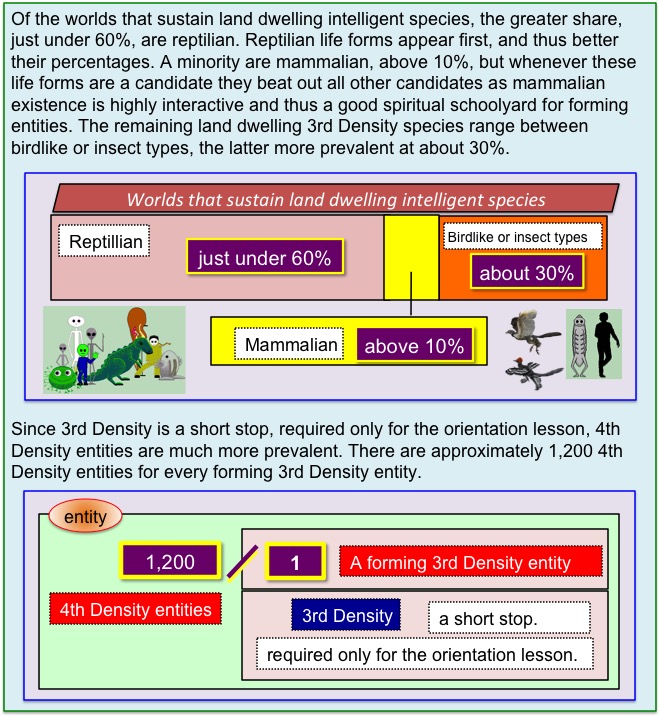 Waterworlds, and Other Alien Habitats

Would the Zetas care to answer more questions about the waterworld that many of us are scheduled to reincarnate in?

Before we have the Zetas address this, I'd like to give a bit of background on life on other worlds.

We on Earth tend to think of aliens as hominoid, like ourselves but with some slight difference,

But this is hardly the reality out there in the Universe, according to the Zetas.

The overall percentages, then, are

Not all worlds are habitable,

but many that we, on Earth, have assumed incapable of sustaining life do in fact sustain life,

I have been given what is called a life form orientation, as a contactee,

in preparation for my role as a communicator, being in the media and relaying this information.

The first lineup was a lineup of hominoids, not too much of a shock.

Here's what I recorded as a result of that lineup:

Then we moved on to later presentation, getting progressively more shocking:

The Zetas explained to me why many in the lineup seemed about the same size and shape.

It took me some time to come to grips with Cockroach man, as I did not want to remember.

All those many legs, wagging at me.

Where I had telepathic communication with all the other life forms I was presented with,

nothing seemed to be passing between us.

I presumed this was because our DNA was too different, preventing a shared communication, brain wave to brain wave.

The Zetas state that very few worlds have intelligent insects as the evolved intelligent species, for a reason.

Where reptilians have the repulation of being cold blooded and cruel,

the souls incarnating into reptilian life forms are as likely to be empathetic and kind as humans.

The Praying Mantis, considered by many to be an insect looking alien, is in fact a hominoid.

Nor are the Cat People, who are also hominoids.

Hominoids come in many varieties.

The Nordics, Pleiadeans, Men-in-Black, and visitors from Orion among them.

Where they look human, they are not among us, living on Earth, for a number of reasons.

Where they don't live among us, the Men-in-Black do live on Earth as our neighbors,

as does Bigfoot and a reptilian species that lives in subterranean cavities.

These are not alien visitors form another world, but transplants from other worlds.

Creatures that look and act like intelligent alien species, but are no more intelligent than dogs or cattle, can also be aliens.

Why is this so?

As our Earth is a Kindergarden schoolhouse for emerging souls,

where we learn to either care for each other empathetically or remain self focused,

the battle for Good or Evil, essentially,

our alien contacts are attempting to convince us it one of these directions.

Where aliens advising the good path want to increase empathy,

aliens advising the bad path want to increase fear and terror, as this increases self focus.

Just yell 'FIRE' in a crowded theatre and see how many people get trammeled.

Everyone thinks for themselves.

So these aliens, wanting their number to increase, wanting new converts, want to increase fear and terror among humans.

By the rules, during this counseling, aliens cannot touch people, cannot harm them.

So how do they accomplish their goals?

Vampires, dragons, mothman, and the recent Chupacabras, are not intelligent creatures from other worlds, they are like dog packs, and are used to terrify humans.

By the rules on alien counseling, this is allowed, as it is not much different than a human encountering a bear or a wolf pack.

But the rules ARE different,

as these dog packs can only affect humans if the human submits to this intimidation, gives up, due to terror,

as then the dog packs can savage and eat them,

just as our own dogs packs on Earth can savage people.

But if the human stands firm and does not give into fear and terror,

then these alien dog packs are held back and cannot hurt the human,

as these alien dogs are on a type of leash.

If this line were not drawn, then those visiting Earth from the essential prison colonies, where the self-focused are forced to live with each other, would flood the Earth with these dog packs from elsewhere.

As it is, since they must keep their dogs on a leash, there are limited dog packs here, as there are a limited number of aliens from the prison colonies visiting here.

In the words of the Zetas:

As with dog packs, they are allowed to encounter, terrify, and even kill humans should the humans basically give up and submit. Thus, there are stories of dragons consuming virgins, and vampires biting to death victims virtually drained of blood.

So in that the vast majority of intelligent species in the Universe are NOT hominoid,

and given that Earth is a very busy place right now, during its Awakening to alien presence,

do contactees invariably get contacted by hominoids, or are there some surprises?

The dominant species on a planet might be something that humans would consider a meal,

or vise versa, something that humans would consider a predator.

This type of conflict, for those species that are predators, eating other life,

Is a conflict that ultimately encourages empathy.

Not unlike the decisions of those on Earth who have become vegetarians.

During the pole shift, when 90% of the Earth's population is expected to die either as a result of the shift itself or shortly afterwards due to disease or starvation,

there will be many souls ready to reincarnate into new bodies.

Because of the Earth has been scheduled to be in a Transformation at this time,

when the Earth can become a home for those strongly in the Service to Other, those who are empathetic and genuinely practicing the Golden Rule,

most must go elsewhere to reincarnate.

- those who have not matured spiritually enough to have made a decision will reincarnate in a waterworld.

So where does that leave us, in answering Roger's question about more specifics about the future Waterworld that most humans on Earth will find themselves reincarnating into?

I quote, from NEW ZetaTalk, written to address this question.

Comment by Cameron W Coates on April 1, 2017 at 7:36am
I know that a couple of "reporting s" of information are from old Zetatalk, but I had not found them yet and the graphical nature makes the absorption of the data more accessible to my engineer brain. Thanks again!