4 o’clock position to the Sun. Did MrMbb333 discover Nibiru?
[and from another]
https://www.youtube.com/watch?v=8fGjwLNDqdY 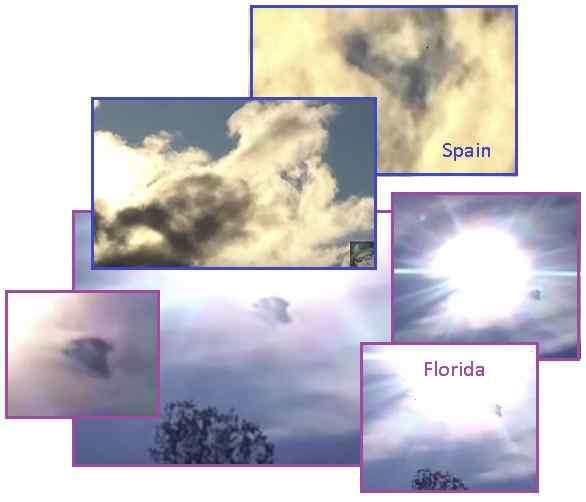 MrMBB333’s followers have presented him with evidence of Nibiru, though MrMBB333 has yet to call it by name. As seen in Spain, it appeared at the 3 o’clock position because the lean to the West was in play. Later in the day as seen from Florida, it was at the 4-5 o’clock position because the wobble corrected. Why the odd separation in the clouds, a pointed hole in the cloud? Nibiru is a smoldering brown dwarf, emitting heat and other emissions just as the Sun does. But these emissions differ in certain respects.

Solar emissions are well known, and documented by mankind on BATSRUS – heat, x-rays, magnetons, electrons, among others. Nibiru has these emissions but as it is closer to the Earth, standing at the orbit of Venus, many emissions known to man are more intense when they strike the atmosphere of Earth, thus burning a hole in the wispy clouds. The charged tail of Nibiru is slung toward the Earth, mingling with the atmosphere, and where the Solar Wind is evenly applied to the atmosphere, the tail of Nibiru delivers a pointed blow.

The burn through the clouds has a point, forming a triangle in the sky, because a waft of the tail is moving, swiping from one side to another, and dissipates as it encounters the atmosphere. The point is where the tail strikes, the broad exit is where dissipation occurs. This phenomena not only exposes Nibiru and its dominant moons forming the Double Helix, it accentuates them. Thus mankind will be propelled to notice this object in the skies, as the orb of Nibiru as a planetary object is obvious.