“Thousands of my people in the north are thirsty and hungry, thousands of us here in the south are now drenched in seawater." said Tony deBrum.

The seawater flooding is even crueller given that the islands are in the midst of a serious drought with almost 7,000 of its 55,000 inhabitants exposed. On June 25, 3013,  extremely high tides combined with 6 to 8 feet surfs caused coastal inundation of up to 2 feet along the south facing shores of Majuro. Meteorologist-in-Charge Reginald White submitted the following report:
During the highest tide (around 6:00 a.m. ) the sea began to inundate the southeast to the southwest parts of Majuro. The saltwater breached the coastal roadways and littered them with debris.

The salt water receded around 7 a.m., but left numerous, small rocks and other debris on the coastal roadways and near living quarters on the southeast to southwest parts of Majuro.   The arrival of the long period swells caused 6 to 8 feet surfs that coincided with the 6:00 a.m. extremely high tide contributed to the coastal inundation in Majuro.

• The cement seawall that protects the runway broke in four places and debris were strewed all over the runway causing United to over-fly Majuro until all the debris were cleared off the runway..

• Salt water may have contaminated the rain water that was on the south side of Majuro airport catchment area.

• Damage to pigpens and other small wooden houses

• Many parts of the road were flooded under one to two feet of salt water.

• All affected areas are littered with debris.

• Some residential houses evacuated until the water subsided. This week across the region some island nations have been experiencing unexpected high tides.

In Fiji there have been reports of water running across the roads and affecting hotels and villages along the Coral Coast. As well last night residents of Majuro in the Marshall Islands were preparing for a high tide after big swells earlier this week inundated the southern side of the atoll, reportedly generating waves of up to two metres, and Samoa has also been hit.

Listen to the Audio: Marshall Islands, Fiji and Samoa hit by tidal ... 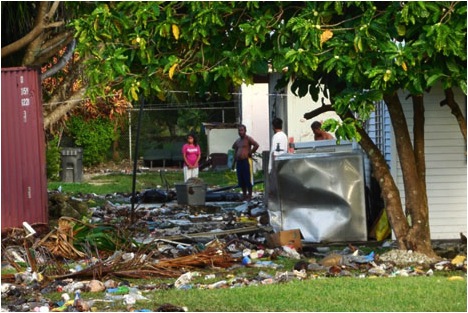 Seawater has strewn debris across the islands and could further increase the salinity of freshwater resources that are already in short supply (Source: Olai Uludong)

MAJURO, June 26, 2013 (AFP) - As the US urges world leaders to ramp up action on climate change, the leader of one small island chain in the North Pacific Ocean has already got the message -- watching helplessly as rising seas slowly erode his birthplace.

The idyllic beaches on the island of Buoj where Marshall Islands President Christopher Loeak fished as a boy are already submerged, and the ever-encroaching ocean now threatens to wash away roads, schools and airstrips.

"The end of the island gets shorter every year. Some places we used to stand on the beach to fish are now in the water," Loeak, 60, told AFP.

Buoj is one of 52 islands in Ailinglaplap, an atoll that a Marshall Islands survey found was one of its most vulnerable to climate change.

"I have great attraction to Ailinglaplap," Loeak said in the capital, Majuro. "I can live on other islands, but I was born and raised there. I always think about going back there to live."

The Marshalls, an island nation of some 70,000 people about halfway between Australia and Hawaii, will have a rare moment in the international spotlight in September, when it hosts the annual Pacific Islands Forum.

Loeak said he wanted to use the opportunity to send a strong message to the world, particularly larger polluting nations, about the need for action to slow down climate change.

"We will not stop telling people that climate change is a real issue for humanity," he said. "We will be the first to feel it, but it will come to them and they should realise it."

The warning was echoed by Barack Obama in a landmark speech Tuesday, in which the US president dismissed climate change deniers and outlined steps aimed at making Washington a global leader in greenhouse gas reduction.

"We don't have time for a meeting of the Flat Earth Society," Obama said.

"Sticking your head in the sand might make you feel safer, but it is not going to protect you from the coming storm."

The impact of global warming is starkly evident in Ailinglaplap, with the Marshall Islands' senior climate change advisor Steve Why saying the majority of the atoll's shorelines were eroding.

Why and his survey team documented coastal erosion as an increasingly serious problem affecting many of the atoll's islands and noted the threat of rising sea levels to the entire country.

About 1,700 people are scattered on the atoll's islands, which are barely a metre (three-feet) above sea level, even at their highest points.

A causeway linking some of the islands is disappearing, while salt water makes previously productive agricultural land useless.

Why said discussions with the community showed people wanted the infrastructure problems fixed, but they were reluctant to confront the worst-case scenario.

"Most conversations stalled as we envisaged what the future held -- over a three foot rise in average sea level during this century, and more beyond that," he said.

"(It's) not difficult to imagine what will happen over the coming decades while standing, talking, sleeping and raising one's family on land that is just a couple of feet in elevation above the high tide mark -- a line that is now always slowly moving inland -- when there isn't anywhere else that's easy to retreat to."

Loeak said the fate of the low-lying nation raised questions about the basic human rights of those affected by global warming, warning that if the islands were ultimately engulfed by the ocean, "we become refugees".

Loeak said that while he was happy to see world leaders such as Obama talking about climate change, it had not changed the fact that sea levels were continuing to rise in the Pacific.

And he said in the face of rising waters, his own fate was tied to that of the island.

"I will remain here until I die," he said. "If the water comes, it comes."