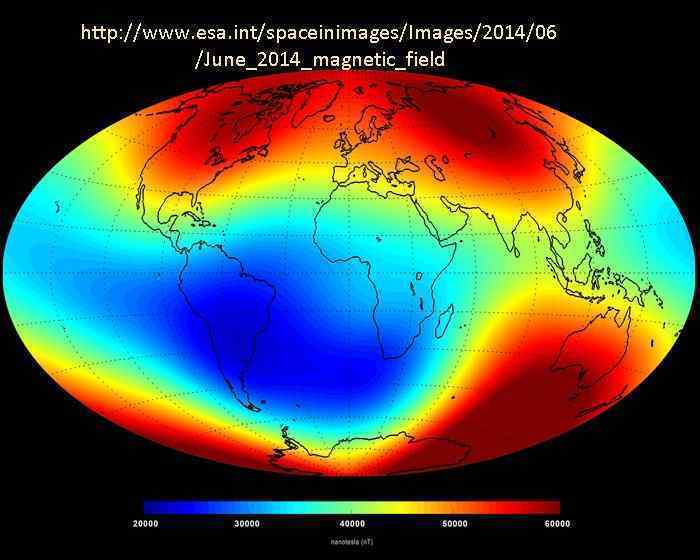 Is this Swarm image of Earth’s magnetic field showing the wobble? It looks to me that it is. The red is stronger magnetic fields and the blue is weaker. They call it a "snapshot" as of June 2014. http://www.esa.int/spaceinimages/Images/2014/06/June_2014_magnetic_...  If you envision a line following the north pole on the Swarm image that correlates to the wobble. It also looks to match the wobble images you (Nancy) have used to help explain the wobble. The long deep red strong magnetic field for the North Pole (it's easier to see with the North Pole in the image) shown in the Swarm image and it's oblong or elliptical shape would make sense. If Nibiru/Planet X was not in the inner solar system I would expect the strong fields to be over the north and south poles and mainly circular in shape. Reading Zetatalk one would know the answer but I would also like to ask so they can give comment. Can the Zeta's give a short comment on what the ESA's true intentions are with Swarm measuring the changing magnetism on Earth? [and from another]http://www.esa.int/Our_Activities/Observing_the_Earth/Swarm/Swarm_r...  Swarm Reveals Earth's Changing Magnetism. 19 June 2014. The first set of high-resolution results from ESA’s three-satellite Swarm constellation reveals the most recent changes in the magnetic field that protects our planet. Launched in November 2013, Swarm is providing unprecedented insights into the complex workings of Earth’s magnetic field, which safeguards us from the bombarding cosmic radiation and charged particles. Measurements made over the past six months confirm the general trend of the field’s weakening, with the most dramatic declines over the Western Hemisphere. But in other areas, such as the southern Indian Ocean, the magnetic field has strengthened since January. The latest measurements also confirm the movement of magnetic North towards Siberia.

The Earth’s magnetic field has been confused and disbursed, seen as weakening by the scientists, for some time. We were asked to address this issue in 1995, in early ZetaTalk. The entire globe is tilting in a Figure 8 during the daily wobble, as the core, magma, and crust move as one. The Earth’s magnetic field stems from the core, which is liquid molten iron, and as such can waft a bit from one side to another, trying to align with the bully magnet Planet X. This is why the N Pole has seemed to migrate to Siberia from its former spot near Alaska and Canada. But this wafting can happen during the day, also, in synch with the daily wobble.

What Swarm is showing is a compilation of where the magneton flow clusters, during the entire day. It therefore reflects all wafting about that the liquid core might do, from this side to the other, or up and down. When the Sun is centered over the Pacific, the polar push point, the magnetic N Pole of the core is pushed to Siberia, which is why intense magnetism shows there on the Swarm graphic and to the left of S America near Antarctica. When the tilt to the right occurs, the Sun over India, the magnetic poles of the core are a N Pole over Hudson Bay and a S Pole below Australia. When the tilt to the left occurs, the Sun over Italy, the N Pole of the core moves back to Siberia, and remains there in southern Siberia for the bounce back when the Sun is over the Americas.

But what of the S Pole during these last two swings of the Figure 8? The South Atlantic Anomaly is a weak point in the crust that acts like a second S Pole. The South Atlantic Anomaly is on the opposite side of the globe, at the same latitude, as the traditional Tasmania S Pole. If the magnetic N Pole of the core prefers to remain in Siberia, the magnetic S Pole prefers to remain near Tasmania. This is why the magneton flow for the S Pole is so heavily in this area, in the Swarm diagram. But during the Earth wobble, where the magnetic N Pole of the core is trying to evade the blast from the magnetic N Pole of Planet X, the core does not take the time to switch the location of its intake, a relatively unimportant player in the flow of magnetons.

5/22/2020  The Earth's magnetic field is weakening between Africa and South America, causing issues for satellites and space craft.

Scientists studying the phenomenon observed that an area known as the South Atlantic Anomaly has grown considerably in recent years, though the reason for it is not entirely clear.
Using data gathered by the European Space Agency's (ESA) Swarm constellation of satellites, researchers noted that the area of the anomaly dropped in strength by more than 8 per cent between 1970 and 2020. 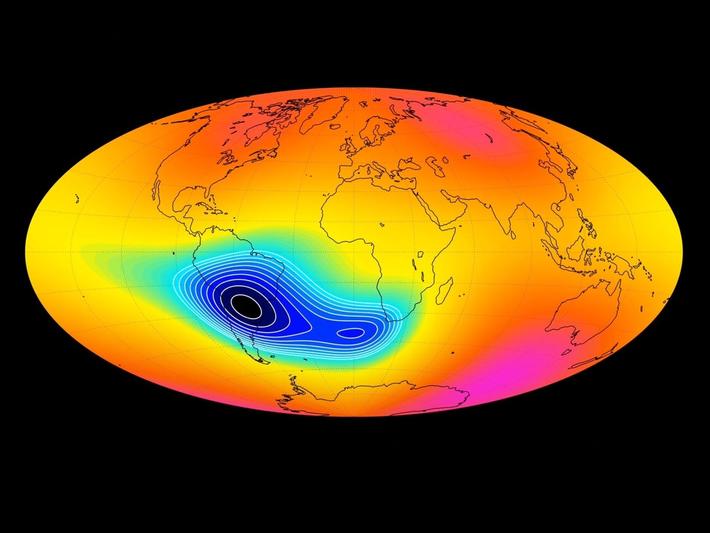