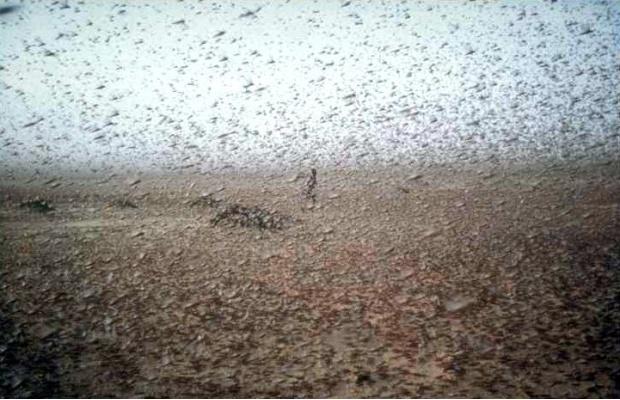 An estimated 30 million locusts are currently plaguing southern Cairo, as Egyptian official struggle to find a way to dispose of a swarm the size of which they could not have predicted.

Locusts swarm Egypt every year, but typically in manageable numbers. The size of this year's swarm came as a complete surprise, and is reportedly causing enormous damage.

Egypt's military is deploying whatever means at its disposal to deal with the problem, but the country might have to wait until predicted strong winds later this week carry the swarm away toward Saudi Arabia.

News of the swarm comes just weeks before the biblical festival of Passover, when Jews and many Christians commemorate the divinely-guided exodus of the Children of Israel from Egypt.

A major component of the Exodus story is God's afflicting of Egypt with 10 plagues, one of which was a locust swarm of exaggerated size.
http://www.israeltoday.co.il/Default.aspx?tabid=178&nid=23707 JERUSALEM — For many Israelis, the biblical comparisons were irresistible: locusts were swarming across the border from Egypt three weeks before Passover, like a vivid enactment of the eighth plague visited upon the obdurate Pharaoh. Others with a more modern sensibility said it felt more like Hitchcock.

Israel first announced that it was on “locust alert” on Monday, after large swarms were spotted in the Cairo area. The Food and Agriculture Organization of the United Nations warned that wind and climate conditions increased the chances of an entomological cross-border invasion.

The Ministry of Agriculture set up a hot line for swarm sightings. By Tuesday, grasshoppers the size of small birds were reported on balconies and in gardens in central and northern Israel. But the largest concentration, an ominous black cloud of millions, settled for the night near the tiny rural village of Kmehin in Israel’s southern Negev desert, not far from the border with Egypt.

Potato farmers in the area complained that their fields were being ruined. Drivers said they could not see through their windshields for all the bugs flying in their direction.On the up side, some considered the curse almost a blessing. The popular Channel 2 television news showed delighted Thai agricultural workers frying up locusts for a crunchy snack. The Israeli television crew munched on a few too, noting that locusts are considered kosher.

The Agriculture Ministry said it was the first time that Israel had seen locusts since 2005, and recalled an even worse invasion in the 1950s.Stav Talal, a researcher from Tel Aviv University who went south to gather samples of the invaders, told the Hebrew news Web site Ynet that the locusts had originated from the deserts of Sudan and had moved north in search of food. But he added that the conditions in Israel were not ideal for the locusts, the relative cold making it hard for them to multiply.

“As I understand it,” Mr. Talal said, “they did not come here in droves. ”However, as in the time of Moses, Egypt was deeply afflicted. While the country’s political chaos has been grabbing international attention, the Egyptian Ministry of Agriculture has been combating locust swarms countrywide: in Cairo, Upper Egypt, the Canal area, the Red Sea governorate, El Arish and other border areas in the Sinai Peninsula.

Monitoring stations have been established in areas suspected as possible destinations for the locusts, the state newspaper Al-Ahram reported. While the ministry maintained that there were no material losses, the Bedouin of Upper Egypt said the locusts had destroyed their cumin crop and asked the government for compensation.

The Jewish holiday of Passover commemorates the biblical story of the Israelites’ liberation from slavery in Egypt. Divine punishment in the form of 10 plaguesafflicted the Egyptians as the Pharaoh refused the entreaties of Moses and Aaron to let their people go. An east wind brought the locusts that devoured what was left of Egypt’s crops. Locusts also appear in the Koranic version of the tale.Modern Israel, however, has a greater range of tools to fight off this plague. On Wednesday, the Ministry of Agriculture said in a statement that spraying pesticide from the ground and air had reduced the size of the swarm considerably.
http://www.nytimes.com/2013/03/07/world/middleeast/swarms-of-locust...

Bugs, Worms, and Weeds - What to Eat When the Cupboard is Bare [http://www.zetatalk.com/index/blog0809.htm]

…  Popular insects eaten in the Philippines are June beetles, grasshoppers, ants, mole crickets, water beetles, katydids, locusts and dragonfly larvae. They can be fried, broiled or sauteed with vegetables.

…  The natives of Algeria would collect large numbers of desert locusts to use as food. They were a valuable resource for the poor population. The locusts were cooked in salt water and dried in the sun. Not only were they collected for personal use, but the locusts were traded in the markets as well. Australian natives, known as Aborigines, have eaten many different insects throughout history. … 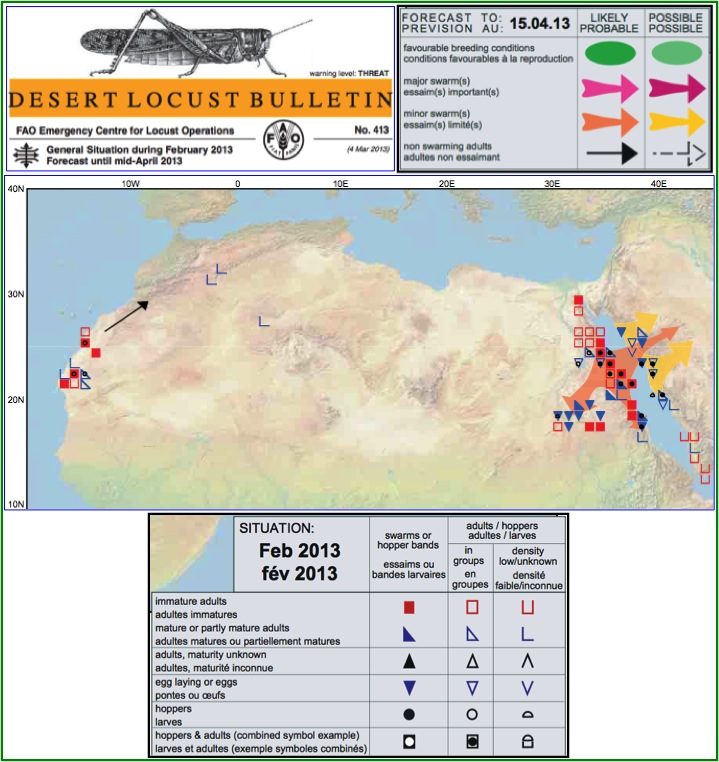 The Desert Locust situation remained worrisome during February in the winter breeding areas along both sides of the Red Sea where locust infestations continued to increase. Adults formed groups and swarms in Egypt, Sudan, Eritrea and Saudi Arabia. Some of these moved into crops along the Nile River in northern Sudan, laid eggs and caused damage, while a limited number of groups and swarms moved north along the Egyptian coast where they could eventually threaten the Nile Delta. Substantial control operations were carried out by the three countries. A smaller, second generation of breeding is expected to occur along both sides of the Red Sea. Groups of adults are likely to move to the interior of Saudi Ababia where one generation of breeding can occur. Elsewhere, a few small swarms formed in the Western Sahara and moved into adjacent areas of northwest Mauritania.