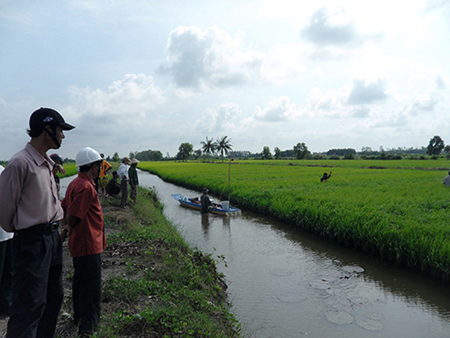 BINH THUAN (VNS)– Saltwater intrusion is disrupting the daily lives of hundreds of local households in the central coast province of Binh Thuan.

Statistics from the People’s Committee of La Gi Town show that Phuoc Loc Ward and Ho Tom Village have suffered the most from saltwater intrusion.

About 120 local houses have been threatened by saltwater intrusion in Ho Tom Village alone. Some of the households were reported to have moved out of the village.

Saltwater intrusion also threatens about 50 ha of shrimp farms, worth hundreds of million of dong in the village.

More than 2 ha of protected forest were hit by sea waves in the town’s Tan Phuoc Commune, said Tran Khac Hai, chairman of the commune People’s Committee.While there was a 300 metre buffer between local houses and the coast in the past, sea water now floods several of these homes, he said.

Meanwhile, hundreds of houses have collapsed due to saltwater intrusion in Phan Thiet City.The provincial People’s Committee mobilised local people to use thousands of sand bags to improve the local dyke but this failed due to strong waves.

Binh Thuan has 192 kilometres of coastline, including six areas that are often eroded by strong waves. – VNS
http://vietnamnews.vn/society/237181/saltwater-intrusion-disrupts-r...

VietNamNet Bridge – The scientists from the Southern Institute of Water Resources have warned that in the dry season, the saltwater can penetrate far into the interior area the Mekong Delta by 70 kilometers, or five kilometers further than in 2012.

The salinity intrusion comes early this year in Mekong Delta. The saltwater has been badly affecting the life and production of local residents. In many localities, people have to buy freshwater at the exorbitant price of VND60,000 per cubic meter, or buy salty tap water at VND10,000 per cubic meter.

Ben Tre province, which is called the “coconut island,” proves to be the locality which has suffered most from the saltwater intrusion. According to the Ben Tre provincial Center for Meteorology – Hydrology, on February 28, the salinity level of 1 ‰ of could be found on three big rivers of Ham Luong, Cua Dai and Co Chien, while the saltwater penetrated 57-68 kilometers far into the land.

Since saltwater has been rising rapidly, people in many localities of Ben Tre have to use salty tap water. Meanwhile, freshwater has become as expensive as gold. Nguyen Van Phong, the owner of a water supply station in Ba Tri town in Ben Tre province said that a cubic meter of fresh water could be sold at VND30,000-60,000, depending on the distance he has to carry water. Meanwhile, a whole tank of three cubic meter is priced at VND120,000-160,000.

The people in the communes of Vinh Hoa, An Hiep, Tan Xuan, An Duc, Bao Thanh and Bao Thuan, where there is no freshwater well, have to go far to Ba Tri town to get water for daily use.

The Trung Thanh private water supply plant has the capacity of 150 cubic meters which aims to serve 4,400 households in Binh Dai town and some neighboring communes, now cannot satisfy the demand of the people.

The salinity intrusion has also made the local people in remote areas lack freshwater for daily use. Nguyen Thien Phap, Head of the Tien Giang Sub-department of Water Resources, said from March 1 to the end of May 2013, the water supply stations in the two districts of Go Cong Dong and Tan Phu Tay would provide freshwater through 60 taps ready for 24/24 hours.

The system of 27 sewers that prevent saltwater in the Long Xuyen quadrilateral area has been closed to protect the hundreds of thousands of hectares of the winter-spring crop. However, a large area of the rice fields there still has been threatened by the saltwater, which may go along the Long Xuyen – Rach Gia canal to penetrate the Thoai Son district. Local farmers have been warned that the lack of freshwater for the spring-summer crops would be very serious this year.