Could the Zetas say something about his latest news about the jet stream. The news now even reached RT news and other news sources while the Washington post is discrediting. It's clear that this is about the blending of the seasons, as in the RT news article I read "A “death of winter” scenario could occur according to Scribbler, where summer heat occurs in winter and vice versa. " The jet stream is acting strange for some time now, so why did they came out with this news now? [and from another] http://on.rt.com/7hbe Scientists have observed an “unprecedented” event that could lead to an end of seasons as we know them, after Northern Hemisphere jet streams crossed the equator and linked with others in the south. Usually separated entirely from each other by the equator where warm air acts as a barrier, both the Northern and Southern Hemisphere consist of jet streams made up of either warm moist air or cold dry air. A “death of winter” scenario could occur, where summer heat occurs in winter and vice versa. [and from another] http://www.express.co.uk/news/science/685077/GLOBAL-WEATHER-EMERGEN... Unprecedented weather chaos has been predicted by climate change campaigners who warn that the northern hemisphere jet stream has crossed the equator into the southern hemisphere, threatening global food supplies and an "end to winter". [and from another]https://www.washingtonpost.com/news/capital-weather-gang/wp/2016/06... These shrill claims have no validity — air flow between the hemispheres occurs routinely. The claims are unsupported and unscientific, and they demonstrate the danger of wild assertions made by non-experts reaching and misleading the masses. 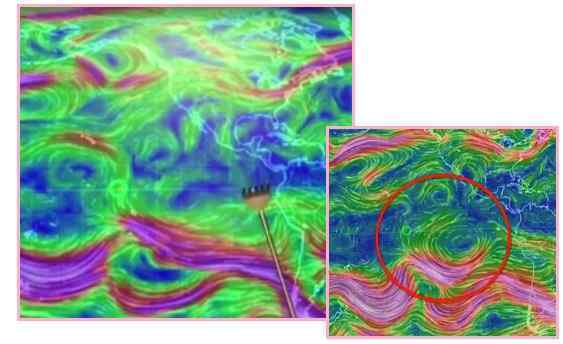 Of course the daily Earth wobble has reached the Jet Stream. This fact is just reaching the media because the wobble has become so obvious, observed by the common man as a rising or setting set out of place, or parts of the Arctic seeing the Sun in Winter when this is not supposed to be possible. We have predicted that the “seasons would blend into one another”, and of course, as with all our predictions, this has begun. Snow in Summer, something we predicted from the start of the ZetaTalk saga, is increasingly common. Of course this will affect crops, especially fruit trees which have their tender blossoms emerge and quickly freeze. The grasping cover-up over the presence of Nibiru is frantic to deny all, as usual.

Both Europe and the US went from unseasonably warm weather to ice storms or hurricanes. We explained recently on the GLP live chat for late December that the figure 8 so well documented when the wobble first established itself in 2004 has continued, with more vehemence. During the wobble, the Earth is suddenly dragged under its mantle of air, but the air mass tries to cling to the land, and follow. This has the effect of pulling cold air to the South, pulling warm air to the North, and all of this creates hurricanes. Hurricanes or cyclones are formed over warm equatorial waters, and the same effect is produced when warm land such as Europe has experienced is pushed under cold air. For the US mainland, which was having Spring in January in many places, the result has not been hurricane force winds but a rush of high pressure cold air into the low pressure that warm air essentially becomes, being lighter because the air molecules are more active and thus farther apart from each other. For Europe, which is tipped to the left, the north-west, during the wobble, and then back again to the right, to the north-east, the wobble acts like a pump, first pushing air down toward the Equator and then sucking it back up. Combined with the Coriolis effect, this creates swirls, drawing the cold air from the Arctic down into the center, thus the hurricane formation. Will this type of extreme weather continue? Certainly, but other forms of extremes will show up too. We have warmed that the seasons will blend into one another, that hurricanes and tornadoes will appear where unexpected, and that swings from drought to deluge will continue, all in an unpredictable manner. We have warned of this since 1995, from the start of ZetaTalk, when it came under much ridicule. Are the debunker claims, that the weather is normal, still being made now?