After the sudden decision of the Greek prime minister to call for a referendum regarding Greece's place in the EU, what followed was exactly what the Zetas have already predicted for most countries, albeit in a smaller scale. Closed banks and strict withdrawal limits for atms, rapidly diminishing goods in supermarkets and fuel supplies etc. The question is, who is hiding behind these moves and what is the purpose of this political and economic drama which seems to have worldwide impact? Is it a rehearsal for similar maneuvers in other parts of the world, a result of the elite's desire to increase their control on the common man as a response to the council's war against them, or just a precursor of what is very soon to follow in the rest of the world? [and from another] http://www.reuters.com/article/2015/06/29/us-eurozone-greece-idUSKB...   Prime Minister Alexis Tsipras put his own position on the line, saying he would respect the result of the vote but would not lead a government to administer "austerity in perpetuity. If the Greek people want to have a humiliated prime minister, there are a lot of them out there. It won't be me."  [and from another] http://www.telegraph.co.uk/news/worldnews/europe/greece/11705720/Eu...  [and from another] http://www.independent.co.uk/news/world/europe/greece-debt-crisis-w...  Greece will become the first developed country in history to fail to repay money owed to the International Monetary Fund. Greece will also become the first eurozone country since the single currency was formed in 1999 to miss a sovereign repayment. The ECB has already said it will not give the Greek banks any extra funding to replace the rapid outflows of domestic deposits. European banks and investors have been steadily reducing their exposure to Greece over the past five years. Economic theory suggests depressed states get a boost when they devalue their currencies because their exports instantly become more competitive. But Greece is not a very strong exporting nation. Greece’s top export is refined petroleum, which is priced in dollars and it relies on imported oil, which is also priced in dollars, all meaning that this industry would get little benefit from depreciation. [and from another] http://www.ft.com/cms/s/0/e965eca6-1e45-11e5-ab0f-6bb9974f25d0.html...  Greece became the 10th member of the European club in 1981. Its early membership of an EU that now numbers 28 countries. This is a clash of democratic mandates — pitting Greek voters’ desire to ditch austerity against the voters (and taxpayers) of other EU countries, who want to see their loans repaid and are loath to let an unreformed Greece continue to benefit from EU money. 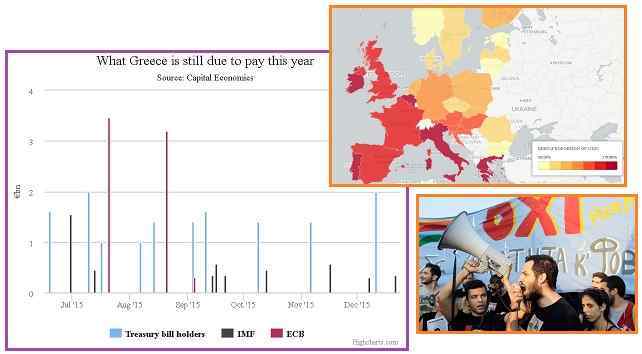 The story of a country going bankrupt is not new, as history has many recent examples – Argentina in 2002 and Germany in 1924. The result is well known. Creditors must write off the debt, anyone holding the now worthless currency finds it falling in value, a sudden and unstoppable plunge, and those who had savings or pensions or cash set aside find all this has vaporized. Such is the lot of paper money, even if it is in electronic form these days. This story, of a country or bank or any entity going bankrupt will increasingly be in the news. The outcome is certain, though will be resisted by creditors and those who have the illusion that they are wealthy.

In the short term, for Greece, the outcome is written. The Euro is itself in danger, having been unpegged from the Swiss Franc recently and falling in value. With 28 member states, it cannot simply hand out money endlessly to a profligate when many of its member states have a lower standard of living. After decades of being coddled, the citizens and politicians of Greece are assuming that being stubborn is a winning stance. The shock has not even started. The suddenly called referendum is to save face for Tsipras, who can then claim he gave the people what they wanted. It will certainly not sway the creditors. Why should it?

We have predicted that the world will go on the barter system. Albeit in stages, gradually and at first only in certain locals or markets. Paper money – bonds or banking balances or printed currency or credit cards – will all be dropped. They will not be honored. For the wealthy, this will be a shock to realize that they have no worth. They will expect that their lands and homes are an asset until hordes overtake them and ignore the supposed masters. They will expect that hired militias will support them until the militias take the liquor and supplies and leave the rich with nothing. The common man, quietly gardening and tending goats or chickens, will be spared this turmoil.