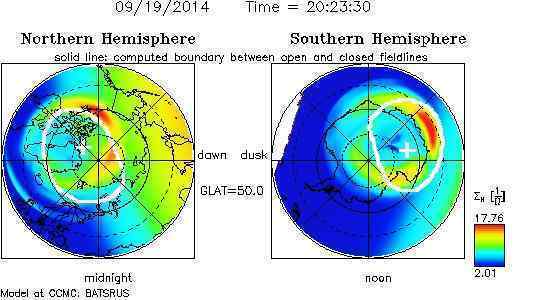 It appears Earth's magnetosphere has entered new territory with respect to the magnetic onslaught from Planet X. In addition to an unprecedented magnetospheric compression that prevailed for several days between September 12 and 18, Earth's ionosphere also suddenly began exhibiting signs of disproportionate electrostatic potential on September 11. In the past, even during severe compressions, ionospheric potential was mostly uniform beyond the polar regions. Since September 11 at approximately 21:00 UTC, ionospheric potential is increasingly at the lowest level on the side of Earth facing away from the Sun. Can the Zetas please explain why this is now occurring?
http://ccmc.gsfc.nasa.gov/cgi-bin/SWMF_RealTime_browse.cgi
http://ccmc.gsfc.nasa.gov/models/modelinfo.php?model=Weimer
http://ccmc.gsfc.nasa.gov/cgi-bin/display/RT_t.cgi?page=potential
http://iswa.ccmc.gsfc.nasa.gov:8080/IswaSystemWebApp/
http://en.wikipedia.org/wiki/Ionosphere
[and from another] http://en.wikipedia.org/wiki/Atmospheric_electricity  Earth is surrounded by a magnetosphere. The magnetosphere is the location where the outward magnetic pressure of the Earth's magnetic field is counterbalanced by the solar wind, a plasma. Most of the solar particles are deflected to either side of the magnetopause. The ionosphere is the inner edge of the magnetosphere and is the part of the atmosphere that is ionized by solar radiation. [and from another] http://www.briangwilliams.us/meteorology/the-atmospheric-capacitor....  The earth is a fairly good conductor of electricity. So is the upper part of the atmosphere known as the ionosphere. The air between these two conducting regions, in the troposphere (where most weather occurs) and in the stratosphere, is a poor conductor of electric current. The troposphere and stratosphere of the earth compose a good electrical insulator, but it is not perfect. Vertical air currents, and regions of high moisture content, produce channels of higher conductivity than that of the surrounding air. Cumulonimbus clouds, which sometimes reach to the top of the troposphere, present paths of better ground-to-ionosphere conductivity than stable, dry air.

The common man can sense that the Earth is being bombarded by magnetons from the N Pole of Planet X. This is being documented by the increase in blackouts, static on radio and TV, planes disappearing from radar, planes crashing from electrical problem, and satellite failures for GPS and GLONAS. Earth scientists note this by capturing the electrical potential, (ie the difference between the positive charge of the Ionosphere and the negative charge of Earth) and measuring the strength and components of the Solar Wind.

When magnetosphere charts show the magnetosphere “compressing” it means that the Earth’s magnetosphere cannot compete and is being corrupted by either a larger magnetosphere (ie Nibiru, aka Planet X) or an intense blast from the Sun. For the past decade, the deforming magnetosphere of Earth cannot be explained by the Solar Wind, though the lingering cover-up over the presence of Nibiru in the inner solar system has NASA trying to relate magnetosphere problems with solar activity. NASA freely lies, and has been doing so for over a decade, blaming these problems on non-existent or slight solar activity. That these magnetic blasts are coming from Planet X can hardly be denied.

The protection that the magnetosphere affords to Earth is described by Earth scientists as a deflecting of the Solar Wind at what is assumed to be the outer edge of the Earth’s magnetosphere, at the point where the Ionosphere resides. When the magnetosphere becomes compressed, the bombardment by the Sun is assumed to drive the electrostatic charge in the atmospheric layers closer to the Earth, thus increasing lightning discharge and potentially interfering with mankind’s electrical systems. This has been happening lately, an increase in lightning and blackouts, and will increase without abatement in the future.

Magnetic and electric particles are known to be attracted to each other, and flow together. The Earth is assumed to have a negative charge, as lightning discharges to its surface. The poles likewise are assumed to have a positive charge at the N Pole, which is the outbound flow of magnetons, and negative at the S Pole, the intake. Prior to September, 2014 the familiar equilibrium where the assumed edge of the Earth’s magnetosphere, ie the Ionosphere, would bear the brunt of electrical incitement, ie a positive charge from the bombardment of solar rays, existed.

Now under the intense assault from the magnetosphere of Planet X, the point where a positive charge is kept at a distance has diminished. It is closer to Earth. This is noted as both an increased negative charge for much of the Earth, and a higher voltage in the Ionosphere. That  the negative charge is on the side opposite the Sun and Planet X is noteworthy, as it is due of course to the blast of magnetons and accompanying electrons from the N Pole of Planet X, though NASA might continue to try to blame the Sun. We have long warned that blackouts would increase, satellites would increasingly fail, and air travel become increasingly risky. That time has arrived. 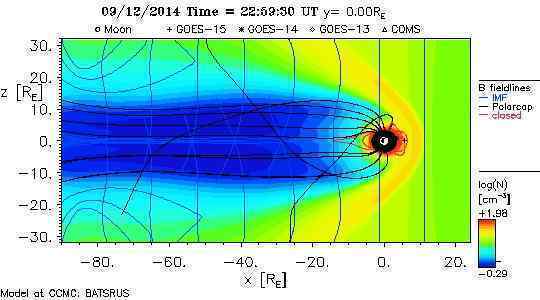 Following 32 minutes of missing images in many BATSRUS December 5, 2020, the Magnetosphere cygnets showing the magnetosphere of the Earth underwent a prolonged severe compression with continued strong polarity Increases. 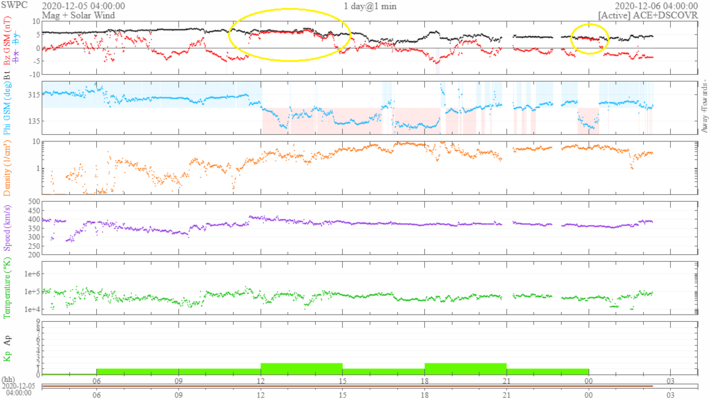 September 3, 2020 the Y-Cut showing the return of missing frames during severe compressions and Polarity Increases daily. 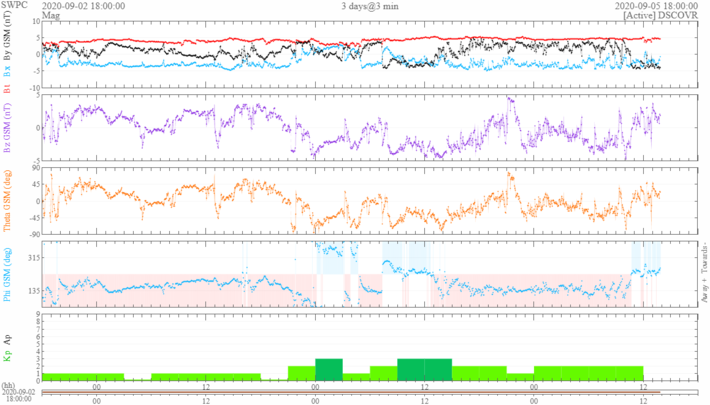 On July 9, 2020, following almost 2 months without any significant periods of omissions from the ISWA BATSRUS and other magnetosphere cygnets, we now see the return of these omissions (missing frames/time).

The periods of omissions are a good indicator of a Polarity Increase.

The 4 paired images from these events are shown below. The image left is the last image before omissions , and image right is first return image.

On May 5, when many of the ISWA- BATSRUS- Magnetosphere cygnets went offline for over 36+ hours, upon return to public viewing the Cygnets continued to run several hours behind from the 5th - 8th. Looking at the amount of missing time and missing images during this severe magnetospheric unrest and judging by the length of time when these cygnets are removed from public view during these polarity increases, it's easy to see that the hide and seek games are in full swing just weeks into the summer trimester. This is all to prevent images of a mangled magnetosphere from public view.

May 13th. gave them plenty of opportunity to hide the amount of time when these cygnets are removed with 6 Polarity increases within a 24 hr. period.

There were polarity increases between April 23 -May 5, (2019) but none with missing frames/time. 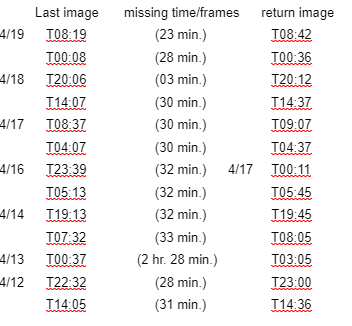 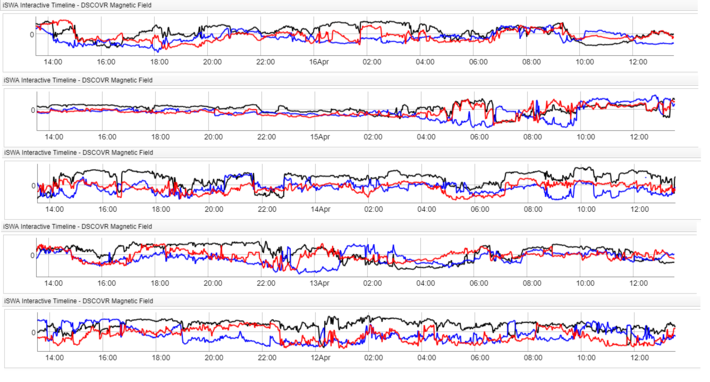 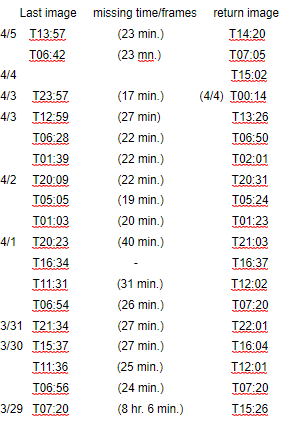 from March 28-29, 2019. The bulk of many of the magnetosphere cygnets struggle to remain online these past 5 days. 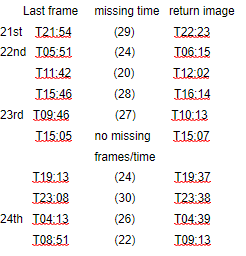