What is causing the worldwide increase in these immense dust storms. Sometimes, as in China and London, they have a red color and are blamed on the Sahara.  [and from another]http://www.dailymail.co.uk/news/article-3043849/Mystery-surrounds-s...  April 17, 2015.  Experts cannot pinpoint the reason behind the spate. The footage of the dust storm in Belarus, filmed from a high rise apartment, shows traffic moving along a busy street. The storm was caused by a cold front moving in from the Ukrainian-Belorusian border. A raging sand storm sweeps in on the city of Golmud in north west China, where 200,000 people live. China's Meteorlogical Centre issued a blue alert as the sandstorms swept across the north of the country. Golmud was left covered in a remarkable red haze when the sand cloud blew across the city.  The Shard, one of London's most iconic buildings, is pictured shrouded in 'blood rain' earlier this month. In December a small town in Queensland, Australia, experienced a dust storm (pictured) that residents said was unprecedented in magnitude.

Other than the wobble worsening, what is causing the massive dust storms which are undeniably on the increase around the globe? Some of this is caused by the red dust being increasingly delivered by the wafting tail of Planet X. This dust is a stealth dust storm in the main, as it can be seen at dawn or dusk or when the Sun’s glare is diminished in some way, but otherwise is perceived as merely a haze in the air. In regions where humidity or rain pull the red dust from the air and attach it to the soil or vegetation, the dust in the air is temporary. But in dry or desert regions, such as central China or Australia, the dust can be lifted during wind storms. The red dust from the tail of Planet X thus compounds the dust normally found in these regions. 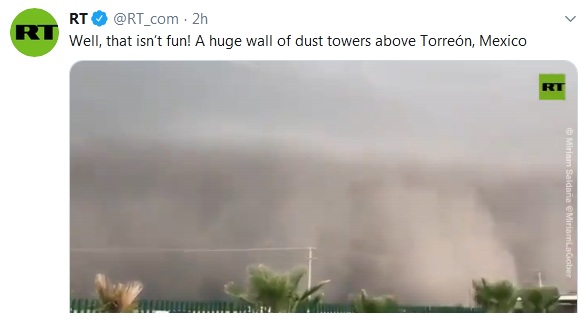 Swathes of Greece are blanketed in orange haze after southerly winds swept dust from the Sahara desert in Africa to southeastern Europe.

Health authorities have urged the young, elderly and those with breathing problems to limit their time outside.

Huge dust clouds have reduced visibility in large parts of Greece, including the capital Athens.

The southern holiday island of Crete has been particularly badly affected, with some areas reporting dust in the air at 10 times normal levels - forcing school closures.

Meteorologists said conditions are expected to improve from Monday evening in the capital and from Wednesday in southern Greece and Crete.

Twitter users have posted images of streets and beaches across the country, which have a warm orange glow as the African dust sweeps through.

The Athens Observatory said on Friday that one of the largest ever transfers of desert sandfrom the Sahara to Greece took place on Thursday when the dust first arrived.

Concentrations of dust were the highest in 10 years, the Athens Observatory's meteorological service said.

Orange snow was spotted in ski resorts in Russia, Bulgaria, Ukraine, Romania and Moldova as the dust engulfed southeastern Europe.." 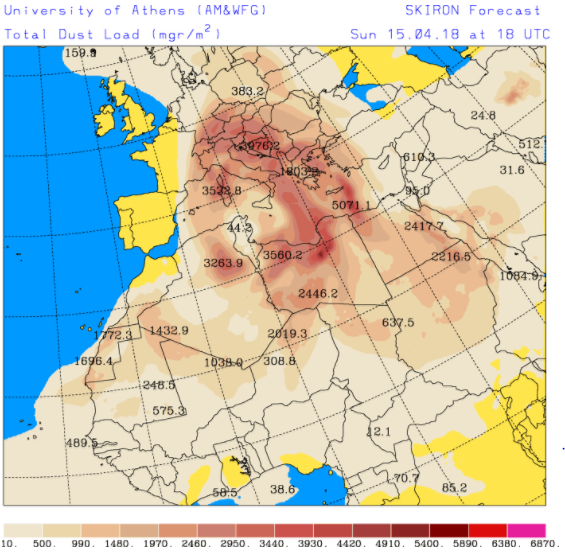 The atmosphere around Athens on Sunday was full of dust blown from North Africa, leaving the skies over Attica cloudy and visibility limited.

Dust clouds have been blown over parts of southern and central Europe this week, with doctors warning vulnerable people — the elderly, children and those with respiratory complaints — to be cautious.

Low-pressure weather in Africa is being blamed for the phenomenon which prompted doctors to urge the elderly or those with respiratory illnesses to stay indoors.

On March 26, from the northern leafy suburbs to the Acropolis and the historical centre and all the way south to Piraeus, the Greek capital was blanketed by a thick orange cloud of dust. 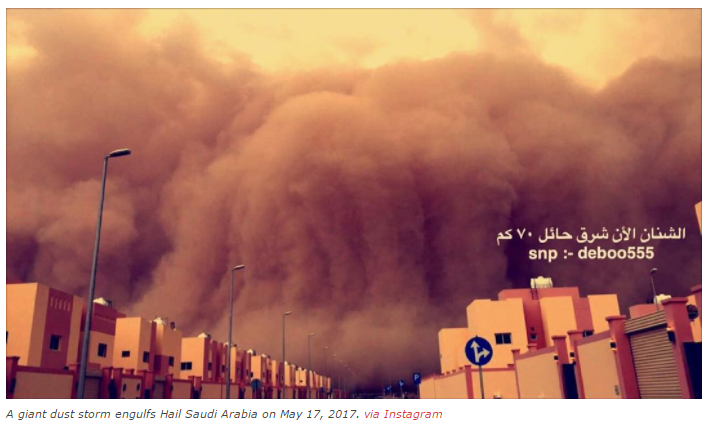 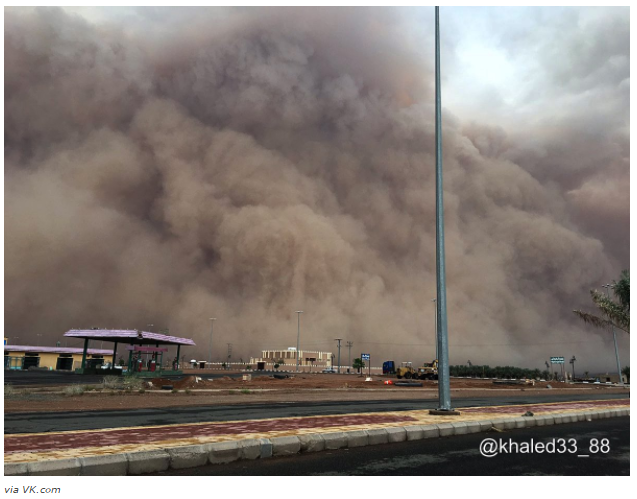 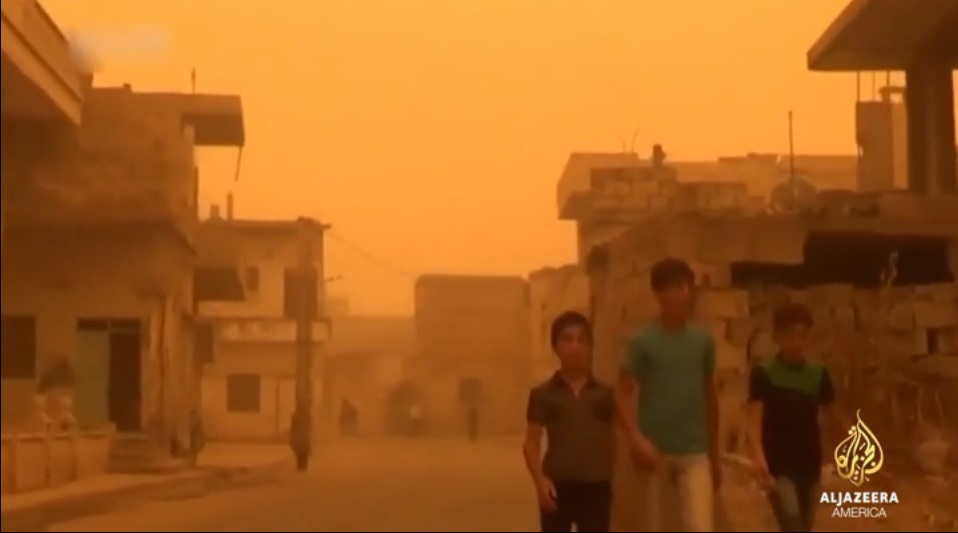 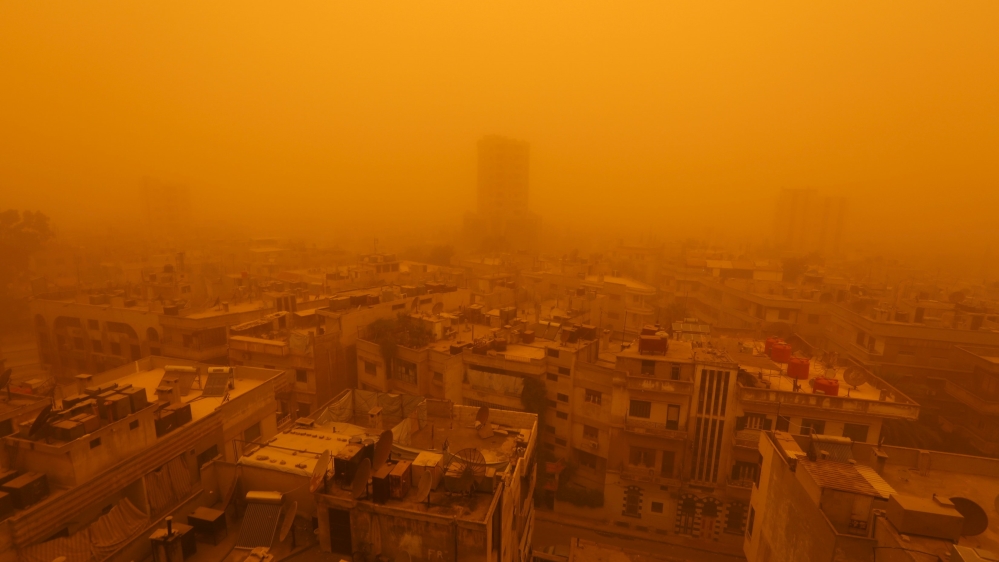 An unseasonal sandstorm swept across the Mideast on Tuesday, blanketing Beirut and Damascus, causing the deaths of at least five people and sending hundreds of others to hospitals with breathing difficulties, officials said.

Reduced visibility prompted the Syrian government to call off airstrikes against rebel fighters, local media reported, and threatened planned protests by Lebanese activists over the government's inability to deal with the country's rampant trash crisis.

The storm also hit Jordan, Israel and Egypt. In Jordan, schools shut down or cut their days short.

Syria's state-run news agency SANA said three people in the central Hama province died from the sandstorm, without elaborating, and said there were more than 3,500 cases of people with breathing difficulties across several provinces.

The sandstorm reached Beirut on Tuesday, a day after it engulfed eastern Lebanon's Bekaa Valley. People, especially those with health issues, were advised to stay indoors while many of those who ventured onto the streets donned surgical masks.

Lebanese authorities warned residents against burning trash that has piled up on Beirut streets this summer, sparking a political crisis and daily protests.

Lucien Bourjeili, one of the protest organizers, said the bad weather may prevent some people from taking to the streets in a major protest planned Wednesday, though "this movement doesn't depend on the weather ... or one day."

In the Syrian capital, Damascus, the head of a major hospital, Adeeb Mahmoud, said over 1,200 people, including 100 children, had been treated for breathing problems since the night before.

"It is unbelievable. This must be some test," said Mansour, a Damascus resident, who gave only his first name. "It's hot. Temperatures are high and above that we have this dusty weather! It is something beyond reasonable. Enough please!"

The Syrian pro-government Al-Watan newspaper said the weather forced a halt in government airstrikes against rebel fighters north of the central province of Hama.

The Britain-based Syrian Observatory for Human Rights, an activist group, said hospitals in the town of al-Mayadeen in the northern province of Deir el-Zour ran out of oxygen cylinders and were unable to take in more patients. 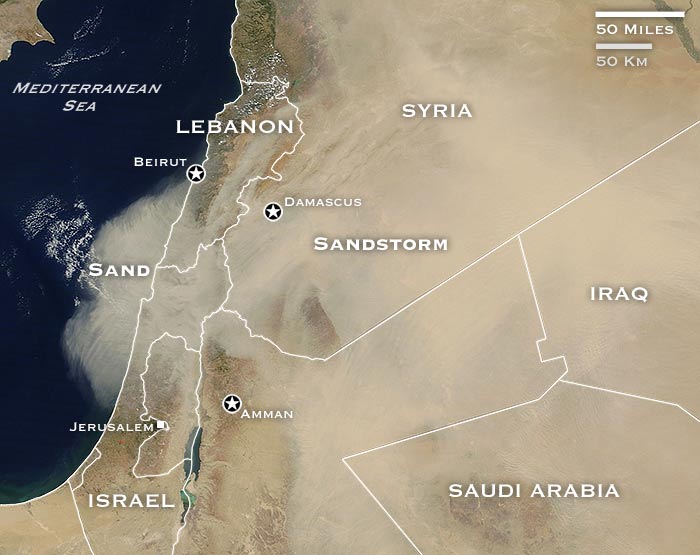