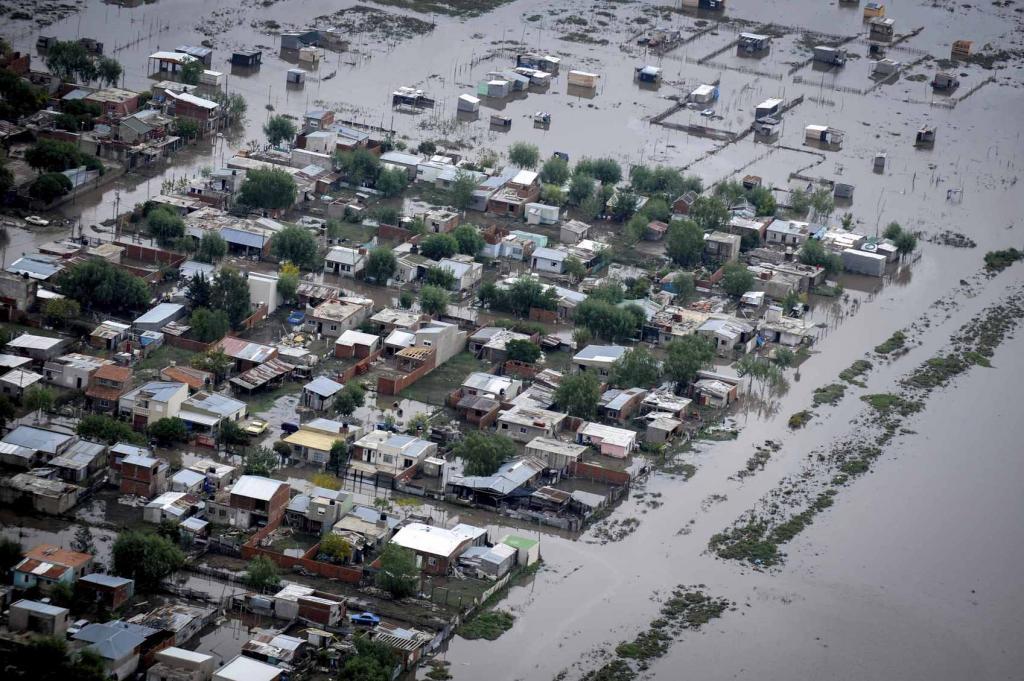 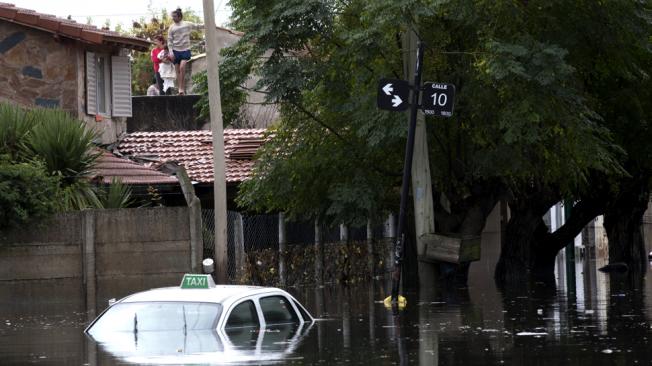 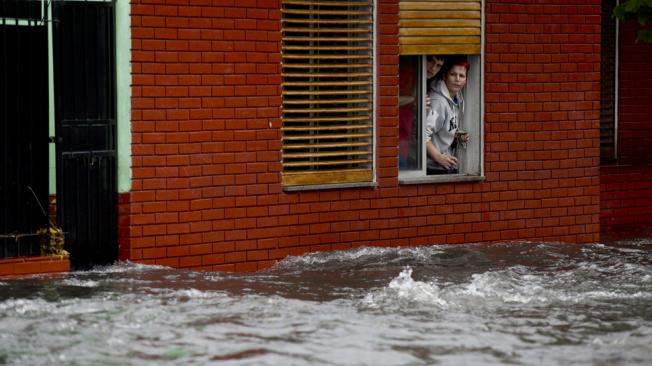 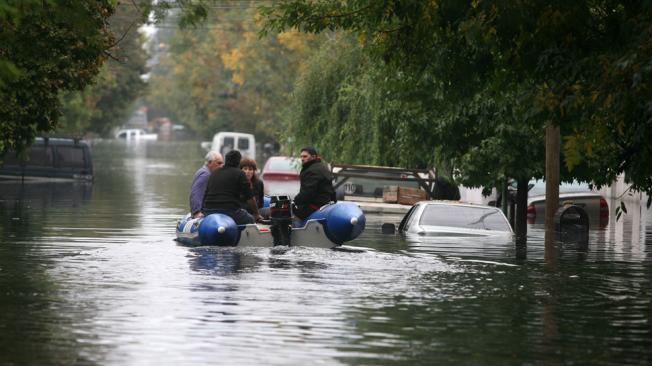 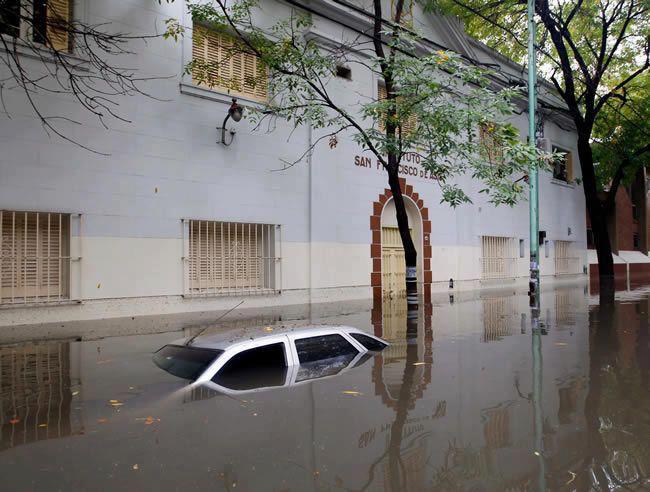 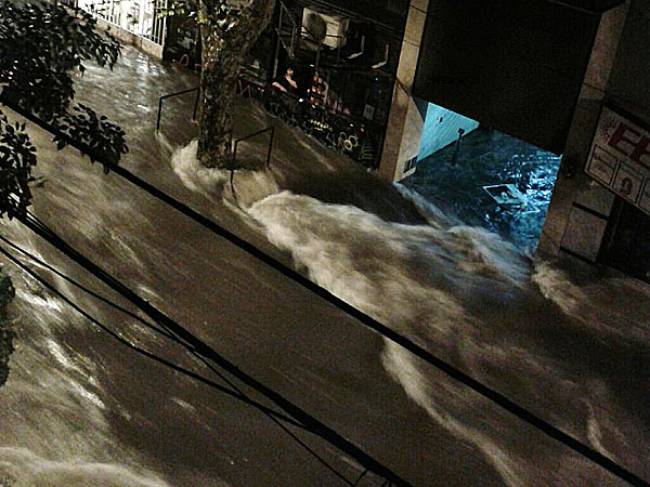 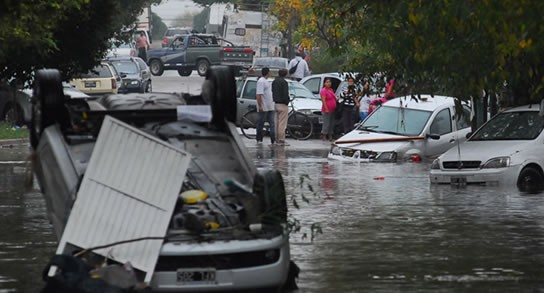 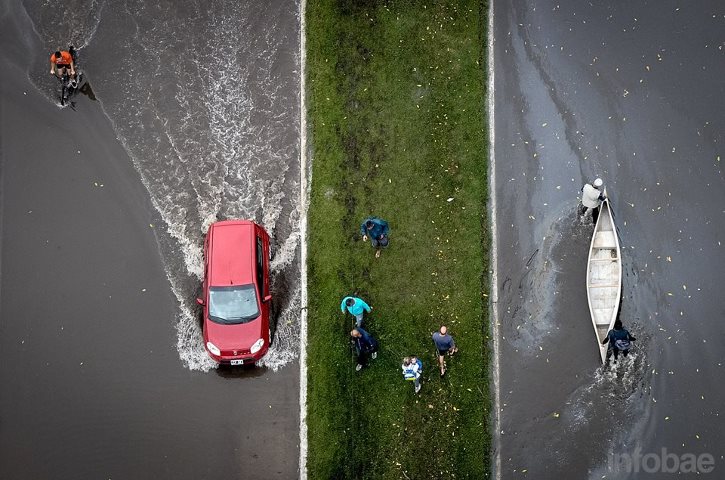 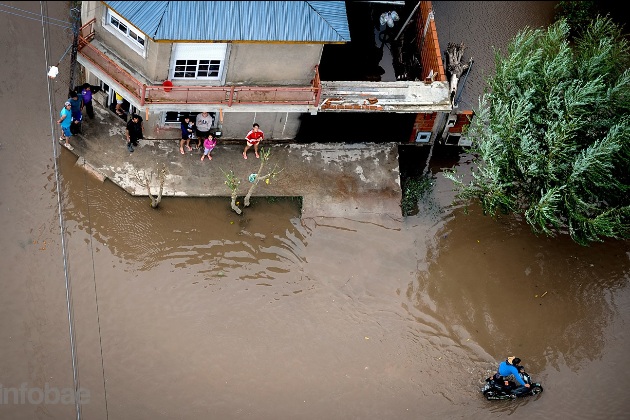 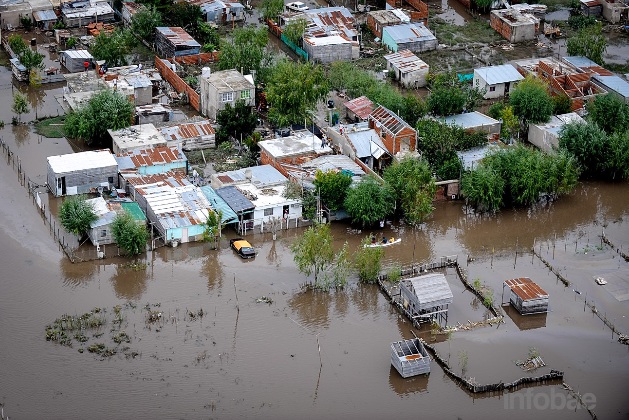 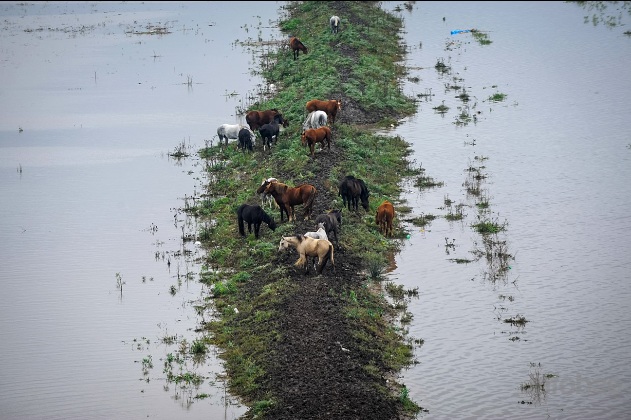 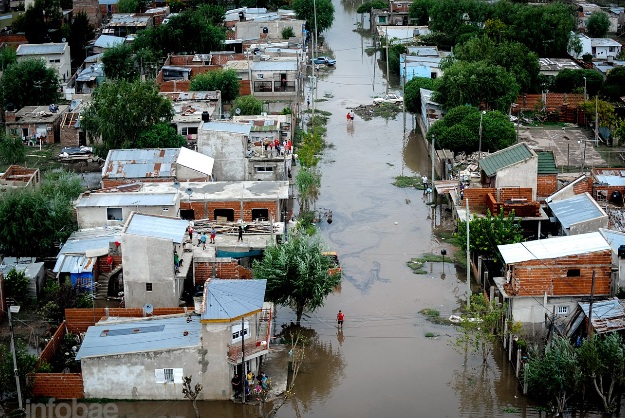 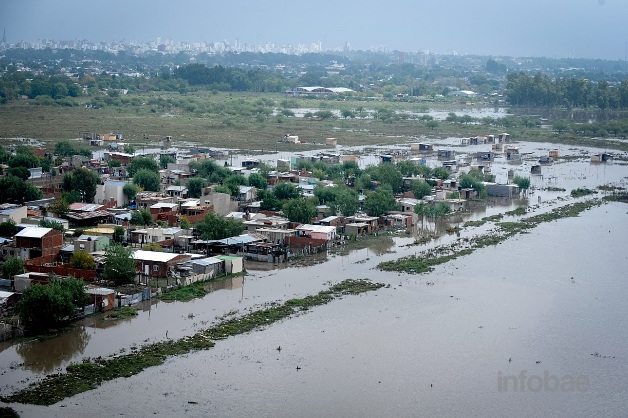 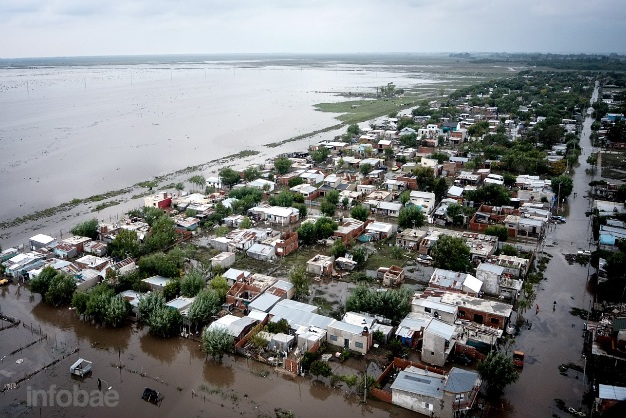 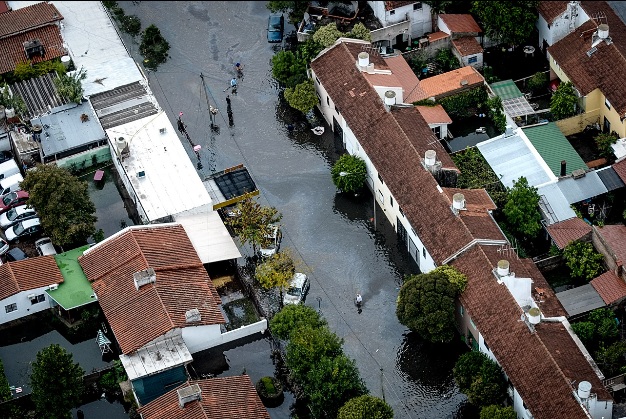 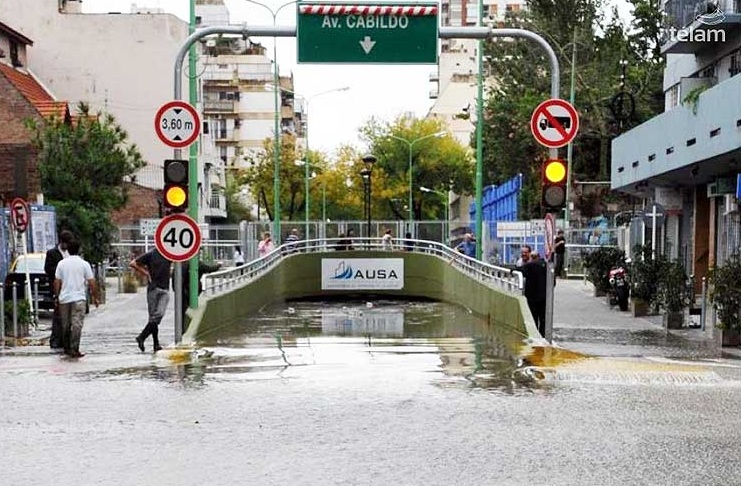 Some people drowned after being trapped in their cars or while walking along the city’s streets when the water rose suddenly on Tuesday night, while others were electrocuted, provincial Governor Daniel Scioli told reporters.

The same storm had killed at least six people in Buenos Aires City the day before. President Cristina Fernández de Kirchner, who was born and raised in the outskirts of La Plata, visited the flood zone in her native Tolosa suburb. She vowed to deploy security forces after residents expressed fears that evacuated homes could be ransacked. The President arrived in a helicopter flanked by Deputy Security Minister Sergio Berni, Deputy Andrés Larroque, head of the Kirchnerite youth group La Cámpora, and her spokesman, Alfredo Scoccimarro.

Despite recent political disagreements with Scioli’s administration, the head of state met with the governor yesterday afternoon to analyze the situation. The President talked with reporters before getting into her official car and also chatted with residents who voiced heated demands. Reports said between 300 and 400 millimetres of rain fell in just two hours, flooding low-lying neighbourhoods in La Plata and surrounding areas.

The consequences of the storm in both the City and the Greater Buenos Aires area increase the overall death toll from three days of rains to at least 54.

“Families and small children spent the night on their roofs, getting soaked. People in wheelchairs were up to their waists in water all night. It was a disaster,” Bruno Zorzit, a resident of La Plata, said.

Nearly one million people live in and around the city of La Plata and many are struggling to recover even as more rain is in the forecast.

Scioli said yesterday that emergency workers are focusing on the people most in need, as large stretches of the provincial capital remain under water.

In a press conference held yesterday afternoon, the governor said many people drowned after trying to take shelter in their cars in Tolosa, a suburb in La Plata.

Cars were flooded to their rooftops and rainwater flowed over the windowsills into many houses in La Plata. People waded out of their neighbourhoods through chest-high water, and police and neighbours teamed up using rubber motorboats to evacuate families and pets to higher ground.

“Such intense rain in so little time has left many people trapped in their cars, in the streets, in some cases electrocuted. We are giving priority to rescuing people who have been stuck in trees or on the roofs of their homes,” Scioli said. La Plata “has never seen anything equal” to this disaster.

The rains also flooded the country’s largest refinery, causing a fire that took hours to put out.

The rains, almost 400 millimetres in about two hours according to some reports, hit provincial capital La Plata after causing widespread flooding and power outages and killing six people in the city of Buenos Aires the day before.

“We lost family heirlooms, appliances, clothing,” said Natalia Lescano, who escaped with her family to a friend’s house on higher ground. She said they had to get out by themselves, and complained that authorities weren’t doing enough to rescue people.

At least 3,000 people were evacuated from their homes in the La Plata area.

Federal Planning Minister Julio De Vido said about 280,000 people remained without power in the city and surrounding province of Buenos Aires. “Our job is focused on restoring service, but we’re going to wait until the equipment dries to guarantee the safety of the electricity workers, because we don’t want any deaths,” De Vido said.

The flooding threatened to ruin food supplies across La Plata’s metropolitan area, which has nearly one million people.

“There’s no power in nearly the entire city,” sources said, adding that the flooding “wiped out the downtown and the surrounding neighbourhoods such as Tolosa, Elvira, Los Hornos, with as much as two metres of water, and people are on their roofs.”

Many of the evacuees slept in their cars overnight. Transportation and businesses of all kinds in the city were at a standstill. In early April 2013, severe flooding claimed more than 50 lives, and forced thousands from their homes in the Buenos Aires region, news sources said. Many of the casualties occurred in La Plata, situated about 60 kilometers (40 miles) southeast of Buenos Aires. Roughly 40 centimeters (16 inches) of rain fell on La Plata in a two-hour period April 2–3, Agence France-Presse reported.

Flood water lingered when the Advanced Spaceborne Thermal Emission and Reflection Radiometer (ASTER) on NASA’s Terra satellite captured this image on April 4, 2013. ASTER combines infrared, red, and green wavelengths of light to make false-color images that help to distinguish between water and land. Much of the water in this scene appears bright blue, including the broad expanse of flood water east and southeast of the city. In Rio de la Plata (upper right), water is clogged with sediment and appears beige. Vegetation is bright green and urban areas are pale blue-gray. 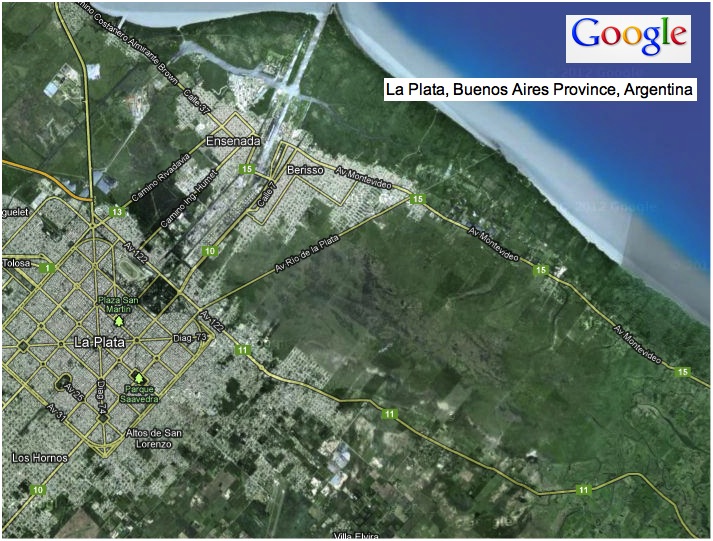 A record 6.1 inches (155 millimeters) of rain fell in just two hours in Buenos Aires on Tuesday. That's equal to all of normal rainfall for April.

Emergency officials are asking people to stay at home after a subway worker died when he was electrocuted after stepping on wet railway lines and after three men and a woman drowned to death.

Service on a subway line has been interruupted, and trains on other lines are delayed. Officials are asking people to avoid driving to prevent accidents.

"Authorities have declared it the worst flooding in more than a century." Worldcrunch.com

"Some officials have described the torrential downpour, which has left more than a quarter of a million households without power, as the worst in living memory." Euronews