In December 2014 several countries in the Sunda plate were flooded - Indonesia, Malaysia, Thailand. Then the flood moved to South America - from the beginning of the year by floods hit Peru, Bolivia, Ecuador, Brazil, Argentina, Caribbean, some several times. Two years ago our friends said that "the S American roll has barely begun, perhaps 13% of the overall changes expected and so on". Could our friends to answer - at what stage movement is today the South American plate, and also other plates?

The sinking of the Sunda Plate is now perhaps 93% complete (up from 70% two years ago), with regions inundated by sea water still excused as broken dykes or levees or excessive rain. The populace has long been moved from those regions, or has learned to live in raised housing and switched from agriculture to fishing. Proper reporting on these trends has been brutally suppressed by the governments in the region. Australia likewise has brutally suppressed immigration, sending those attempting to land to New Guinea, where they have a Commonwealth arrangement. Social adjustments to the sinking of the Sunda Plate can thus be considered essentially complete.

The Pacific Plate has steadily compressed, with major quakes in Japan evident and the S American roll progressing to an estimated 27% at the current time (up from 13% two years ago). Since the USGS has downgraded earthquakes by almost 2 magnitude points, the true impact on lands along the spine of the Andes is not evident, and any loss of elevation in the Caribbean is denied.Flooding in Trinidad, which will be torn apart, is evident, however. The African roll has barely started, now at an estimated 12% (up from 5% two years ago), with the strongest indication of progress above the Mediterranean where support of the Eurasian Plate is lost by the roll, though a new lake developed in Tunisia.

The N American Plate is under extreme bow stress, as booms and flashes and crevasses demonstrate. Significant quakes, where US cities along the New Madrid fault line are shattered, have not started but this will start within this year. That this is related to the approaching Nibiru passage will be denied, with the usual pointing to the past as evidence that these things happen periodically. At present, the New Madrid adjustment is perhaps at only 2%, but as the 7 of 10 movements will accelerate, this will now rapidly change. As we have stated, any tsunami striking Europe will be vastly reduced by the slowed pace of the New Madrid adjustment. 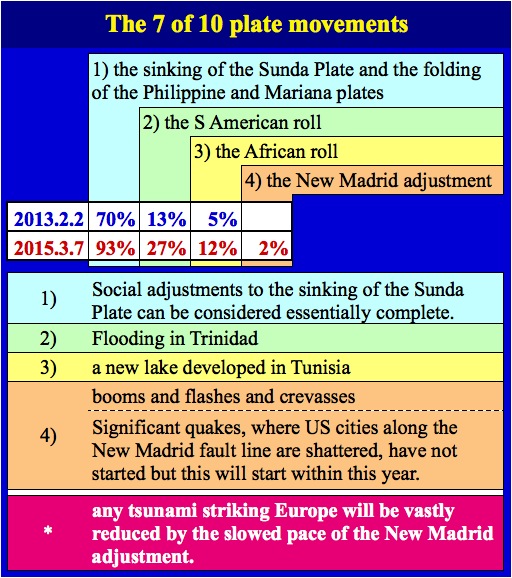