Thank You Note From Lavonne Noisemakers From Mariaelisa Torres

view sun via non nasa source: http://www.plaxo2012.com/^From n3kl.org
somehow canadian earthquakes not on world map of our dear ol USGS so here's canada: http://earthquakescanada.nrcan.gc.ca/index-eng.php
and remember many quakes on USGS site may be inaccurate data in that they may have been downgraded to lessen fears of public...: "this photo from a relative from my home island Rarotonga, Cook Islands taken in the late morning. I can see PX at the 11 oclock position.": 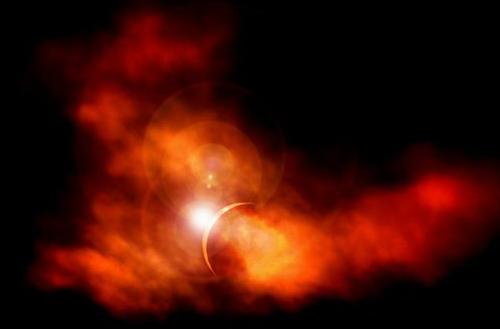 The dark orb is clearly not a lens flare as it is not emitting light. It is a shadow. We have often described the difficulty in getting a snapshot of Planet X, because, in our words, it appears as a dim fuzzball, not a lighted mass but rather a dark fuzzy patch. This photo shows such a dim fuzzball, throwing sunlight back to the Sun. The dust cloud is not allowing sunlight through. Nice catch! 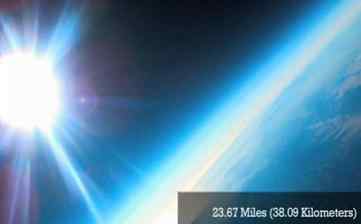 "Despite the halo, this is a capture of Planet X. The Sun and Moon have halos these days because of the grease in the atmosphere from Planet X. (via a homemade balloon into space (Pacific 2) with some cameras attached and programmed to take pictures every few minutes)"

1. As the South Pole, gripped by the passing North Pole of the 12th Planet, moves north, the crust is torn from the core and freed in this way, allowing pre-existing stress points to relax. Thus, Europe and Africa move further east, allowing the Atlantic to rip apart during the slide northward.

2. The immediate effect of the massive plate housing Europe, Russia and the Near East to move is felt most strongly in India, as the Himalayas are driven over India at this point, effectively submerging this country in a wink.

3. The effect of the Indo-Australian plate taking a dive under the Himalayas is to relieve tension along the African Rift, such that this tears, promptly, but in shuddering steps with halting adjustments and pauses between shudders. In essence, the movement eastward of the African continent is a momentum creating this tear.

4. During the tearing of the Atlantic Ocean floor, and the dragging north or the North American continent, an already existing tear in the St. Lawence Seaway tears further, essentially the weak link in this landmass held at so many points to the further side of the Atlantic Ocean. Canada moves north, while the rest of the Americas cling to the Atlantic Rift while it separates.

5. The movement of the massive plate housing Europe, Russia, and Asia to the east also is expected to rip this plate along the Himalayas, as we have stated, creating an inland bay into the Russian lands just to what is now the north of the Himalayas. This follows, in jerks and tears, over the hour of the shift, along with the tearing of the African Rift.

6. When the ocean off the bulge of Brazil has reached the position of the current North Pole, crust slippage stops, creating yet another drama. The major northern hemisphere plates stop, and whatever follows crashes into them. In the case of the Americas, this causes Central America and the Caribbean to crumble.

7. In the case of Africa, already sliding eastward, the force is further movement eastward, as subduction of the Indo-Australian plate has already begun, the weaker link already established and momentum in process.

8. The pileup is in what was the former Northern Hemisphere, and the compression of the Pacific is creating resistance as plates are subducted under the Americas, and then Japan explodes and Indonesia crumbles. 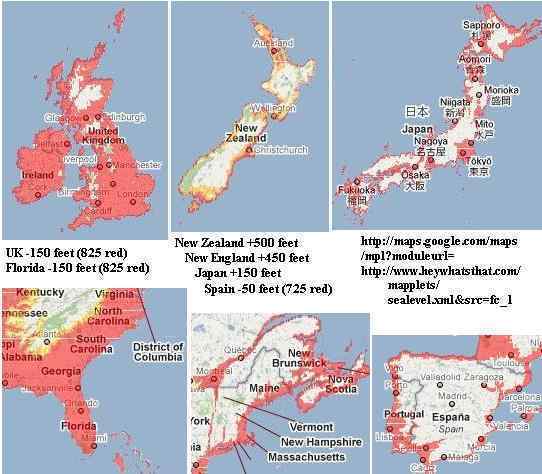 For the past 30 years, I've been residing at the outer banks of NC, east coast USA & now commencing relocation to the appalachian mountains one of my most favorite places:

Cape Hatteras, North Carolina area as photographed from the Apollo 9 spacecraft during its earth-orbital mission. The photograph was taken during the spacecraft's 136th revolution of the earth. Cape Lookout is near bottom of picture. Cape Hatteras juts the farthest out into the Atlantic. Largest inland body of water is Pamlico Sound; and to the north of it is Albemarle Sound. Date Taken: 1969-03-12 http://www.nasaimages.org/luna/servlet/detail/nasaNAS~7~7~30836~134699:Cape-Hatteras,-North-Carolina-area-

Indicative of weather anomalies that have been forecasted by zetatalk for years and years now...

"For the New Madrid, which will include the European tsunami in its effects, there will be one large jolt with a subsequent and almost immediate tearing of the Atlantic. We have stated that the European tsunami will be the largest, but smaller ones will follow in time. Likewise for the New Madrid adjustment, which involve a tearing of the entire N American continent from the seaway down to Mexico. This adjustment will not occur until minor rock fingers have been steadily broken in a number of places. The areas to be affected have already been experiencing quake swarms, buckling roadways, sinkholes, breaking dams, and unsettling jigging which is unexplained by the authorities. When the primary blockage gives, there will be a huge jolt, with little warning. Aftershocks will continue until the time of the pole shift itself."

"It is known by man that the New Madrid Fault line runs beyond the immediate area of New Madrid. When we stated that "Chicago will rupture and adjust" and "Ohio will be pulled in places" this should not be news to man. The New Madrid runs up along the Seaway, to the mouth of the Seaway, and thus will rupture any land it passes through. Plot its course and consider that more than the fault line itself will be disrupted. Rock detached from its former connections is free to react to the dominant theme in the area. If rock was held down, formerly, it can bounce up. If rock was held back, it is free to spring forward. And adjustment in rock strata means that loose soil will sink or heave. This most certainly can affect a broader area than just the fault line. We have stated that Ohio will be affected most in this regard. These matters are related to the rock strata, which bonds or breaks, as we have stated. There is a natural break in the rock strata holding Ohio, along the Ohio River and into its headwaters, as can be seen. Why should Chicago be affected? There is a natural break in the rock strata between the New Madrid and Chicago also, a weakness, which will rupture with the New Madrid. When the Seaway pulls apart there will be a drop in support formerly present during rock attachments. Chicago has long been predicted, by ourselves and others, to be devastated. Much of the infrastructure will rupture, causing buildings to crumble and freeways to be worthless and irreparable. One need only follow the geology of the region, to predict what will happen." Although we have sequenced the 7 of 10 scenarios, there is great interplay between the scenarios. What has occurred to date is that India tilted sideways so that its western border lost 10 feet in elevation along the Indus River valley. This occurred first, in the Fall of 2010, and was followed promptly on December 23, 2011 by the start of the sinking of the Sunda Plate holding Indonesia. The third scenario was the folding of the Philippine and Marian plates, which was evident by February 16, 2011 from heaping water recorded by buoys in the area. India meanwhile continued its dive under the Himalayas, so that Pakistan and Bangladesh are now being inundated with sea water, and the eastern coast of Australia and New Zealand has frequently shown evidence of lifting, with rivers backwashing inland. India's dive will continue apace, throughout, and is not a 7 of 10 scenarios, per se.

Did the sinking of the Sunda Plate complete, just because the Philippine and Mariana plates started folding? We have stated that the Sunda Plate will complete its sinking by the time the S American roll is at its peak, but not before. The folding of the Philippine and Mariana plates also must be almost complete before the S American roll can accelerate. And all of this has been held back to date by plate undulation which caused plate jamming such that there was a temporary delay in Asia. Northern Luzon island in the Philippines seemed exempt from flooding earlier, as it lay on the Philippine Plate, but recently has begun to sink along with the rest of the Philippine Islands. The Philippine Plate is obviously no longer jammed. Meanwhile, the Pacific has been compressing, though this was not given a 7 of 10 scenario number because it is a chronic situation, contributing to the plate movements but not central to the plate movements.

So during the 7 of 10 scenarios in Asia, number 1 (India tilt) has completed, number 2 (Sunda Plate sink) began and is poised to complete, and number 3 (Philippine Plate fold) has barely begun. Number 3 is likely to complete hand-in-hand with number 2 rather suddenly at a time when the Indio-Australia Plate lifts and plunges under the Himalayas. This would be at a time when the Earth wobble switches about violently. The Earth is in a magnetic dance with Planet X, which is causing it to switch into opposition at times, pointing its N Pole at the Sun, then suddenly back to attempting to hide its N Pole from Planet X. Scenario number 4, the S American roll, has been evident since early Spring, 2011 with crumbling along the North Andes fault line and pressure along the spine of the Andes. This will peak during the time when the Asian scenarios are completing, almost hand-in-hand. We are not allowed to give a timeline on how quickly the African Plate's drop will follow, nor how quickly adjustments in the Northern Hemisphere will follow this drop.  http://zetatalk.com/ning/17sp2011.htm

Thank You Note
love and light to you.
From the Gift Store

It will not be a lack of information from the USGS that will be the point of confusion during the earthquakes leading up to the New Madrid adjustment, it will be knowing which quake is the big one vs the many minor quakes preceding it. The USGS downgrades almost all earthquakes, to prevent meaningful statistics from being generated from their databases. They also exclude quakes whenever they can, but this is unlikely to happen in the New Madrid area as it is in the center of a populated land mass. Thus you will have magnitude 6 quakes that will be called a 5.2, magnitude 7 quakes called a 6.1, and when a magnitude 8 or greater quake occurs, it will be called a 6.9.


We would advise that rather than watching the USGS quake statistics, that you watch the Earth changes. The adjustment that will incite the European tsunami will involve bridges on the Mississippi breaking, and being impassable. The land to the west of the Mississippi will drop so that the Mississippi will become 50 miles wide in the state of Mississippi. Watch for this. The New Madrid adjustment will be several large quakes of magnitude 8-9, though will be listed as a lesser magnitude. As the N American continent continues to unzip up to and along the Seaway, the quakes will be less than a magnitude 8 but very destructive to Cleveland and Toledo and Buffalo and the inland locks along the Seaway. Thus it is not what the USGS says that should be watched, but the condition of the bridges on the Mississippi, the impact on the cities along the Seaway, and whether the inland locks are reported as inoperable.