as quoted from youtube: "Millions of Seashells appearing every day on Clifton beach, Karachi, Pakistan. Just Last year in March 2009 " Dolphins Beaching " happened here on Pakistani Beaches.
What is surprising is that not a single private TV channel has covered this huge Event, No discussion forums on this Topic. Not to mention there are large numbers of Earthquakes happening all around the world in the year 2010.
My thought is that all these Events are Signs of Great fluctuations in Earth's Magnetic Field...
This magnetic field fluctuation is happening due to the loss of Lubricant of Oil and Gas inside Earth's Crust.
Oil and Gas acts as Lubricant for Earth's Crust Movement. Now that we have taken out so much Oil and Gas. Earth's Layers have lost this lubricant and as a result we will observe much bigger more devastating Mega Earthquakes... just like Grand Canyon(Mega Earthquakes created Grand Canyons)
Electric Cars and Maglev Electric Turbines and Maglev Train, are the way of the future... if we want to save ourselves and humanity and future generations"

Comment by Tamarama on July 30, 2010 at 4:28am
this pic is taken on 5july2010 where coquina clams were laying on top the beach at cape hatteras: 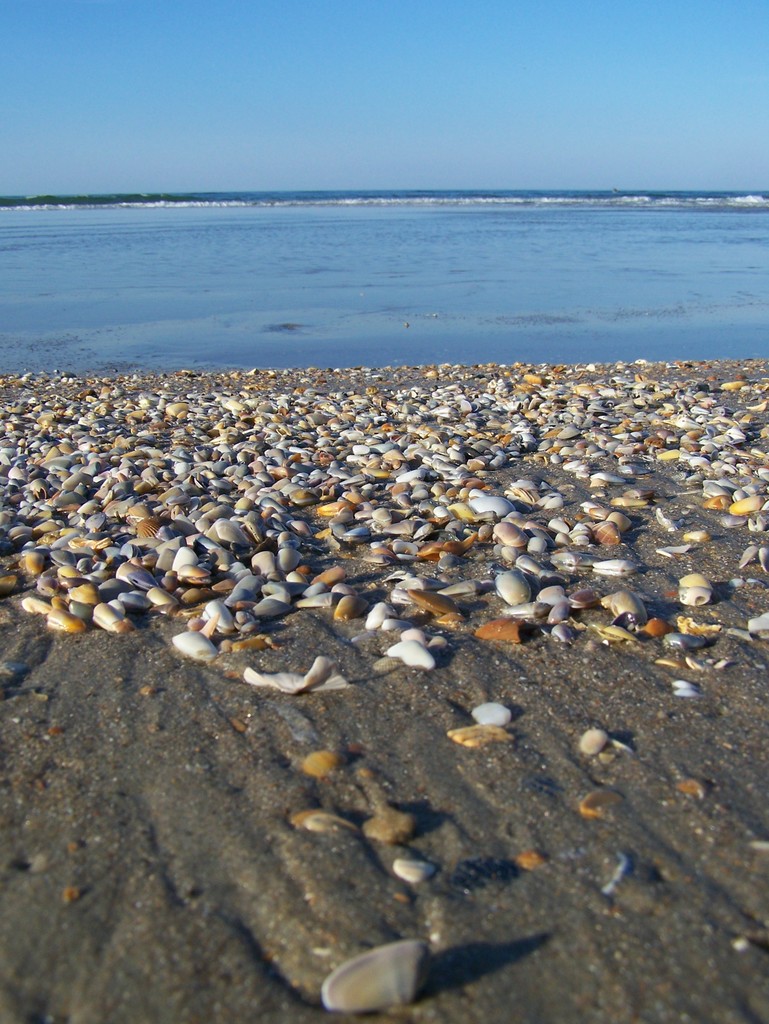 Comment by Tamarama on July 27, 2010 at 12:26am
A video was posted on this site showing huge numbers of clams beached in Karachi Pakistan http://ning.it/d5tCdd. Similar but less dramatic observations involving the beaching of bivalve molluscs has been seen in New Zealand in recent weeks. Is this a sign of seismic/magnetic anomalies being sensed by sea life? Since I feel non-humans are very good early sensors, it would seem very useful to keep observing the behaviour of other species.

Just as pets leave home in an attempt to get away from an areas that is having electromagnetic screech prior to an earthquake, forsaking food and shelter and comfort, creatures in nature attempt to escape. Electromagnetic screech, as earthquake sensitives can report, create muscular and skeletal aches and pains, ear aches, head aches, and nausea. Both electrons and magnetons are involved in electromagnetic particle flows, as the nervous system of both man and beast operates by chemical electricity of sorts. To be in such a locale is painful, and thus the creatures flee in any direction where the pain is relieved. Man represses his awareness of this pain, or attributes it to stress, fatigue, the weather, or perhaps a cold of flu. Animals are not trying to fit into a social scheme, and thus view the situation in a more simplistic manner. They don't bother to pack up and make arrangements, they just go.

Comment by Tamarama on July 20, 2010 at 10:00pm
yes, the clams sense very naturally the vibrations of the changing tides.. I've seen the coquina clams here at cape hatteras push themselves out of the sand as the waves approach as low tide changes to high tide in order to stay in their feed zone. all creatures great & small sense the changes. I feel these clams are getting "out of Dodge" hopefully to higher ground, hopefully humans will heed the signs in time. The stink alone at the pakistani beach may just convince some to relocate..lol