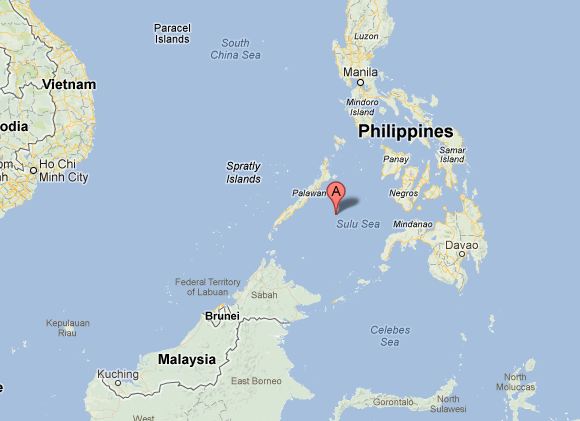 The crumpling Sunda plate which causes sinking but also some ground to rise has caught a US Navy Minesweeper off guard when it hit the bottom in water that no doubt used to be deep enough but no longer is.

The USS Guardian below with a crew of 80:

The MV Weesam 7 ran aground at 6:10 p.m. today near Barangay Tanke in Talisay City marking the fourth vessel to run aground in Cebu this month.

On January 16, three passenger-cargo vessels ran aground off Cebu and Leyte one after another in the middle of the Philippine archipelago.

M/V Our Lady of All Nations, owned by Medallion Transport, ran aground off Bato, Leyte at around 2 a.m., leaving some 90 passengers from Cebu City stranded.

MV Subic Bay 1 of Gothong Shipping was heading towards Cebu City when it ran aground in Bantolinao Point around 2:44 a.m.

Elsewhere, around 240 passengers were left stranded after the M/V Joyful Star, owned by Robles Shipping, ran aground in Bantolinao Point in Mactan Island at around 5 a.m.

Two ferries have run aground since Dec 14.

A passenger ferry ran aground Tuesday near Battery Island, North Carolina, injuring passengers and a crew member, the U.S. Coast Guard and the ferry line said.

Of the 31 people on board, one was flown to a hospital and 13 others were taken to regional hospitals, CNN affiliate WWAY reported.

The 64-foot boat came to a sudden stop at about 9 a.m., which threw people around, leading some to crash into tables, a passenger told WWAY.

The Adventure Ferry was heading from Southport to Bald Head Island at the time, CNN affiliate WECT reported.

The Coast Guard and other agencies responded to the scene.

As to why the ferry ran aground, she said, "We're still in the fact-gathering mode."

Viking Line said its liner, M/S Amorella, had "touched slightly aground" at about lunchtime local time.

None of the 1,945 passengers was injured and the situation on board the ship is calm, a statement on Viking Line's website said.

The company plans to try to move the ship to the port of Langnas on Saturday evening.

The ship is not letting in water, but a small leak has been observed on a ballast tank that normally holds water, it said.

All the passengers remain on board and are safe, it said.

Now they have decided that the minesweeper will have to dismantled to remove it from the reef! 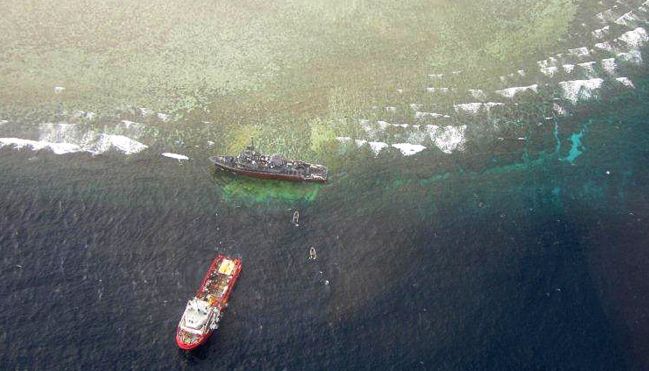 The Coast Guard says oil has spilled into the Mississippi after two barges hit a railroad bridge in Vicksburg, and the river is closed for 8 miles in each direction.

He says he doesn't know how much oil has leaked or how much the barges carried. He says one may have been damaged by hitting the other barge.

He identifies the tugboat pushing both barges as the Nature's Way Endeavor.

Petty Officer Carlos Vega says that the bridge has been deemed safe for trains and that federal, state and local authorities were heading there to assess damage.

After 4 days of being aground on the reef with salvage operations underway, the USS Guardian is now taking on water.

A statement released on January 19th indicated "initial review of navigation data indicates an error in the location of Tubbataha Reef" on the digital map, which begs the question: then why haven't other ships run aground on this reef?

This crew-less minesweeper is still indefinitely stuck on Tubbataha Reef and is now causing an uproar among those concerned with the reef's ecological vulnerabilities. That the U.S. Navy has been unable to muster any explanation for why one of their fourteen Avenger-class ships while underway from Subic Bay, Philippines to Timor-Leste in Indonesia to participate in a training exercise would find itself essentially abandoned on a coral reef ... speaks volumes.

For an Avenger-class mine countermeasure ship such as the USS Guardian (MCM-5) to run aground on the Tubbataha Reef and remain stranded even at high tide is unthinkable!  This ship is designed to navigate littoral waters in search of coastal mine threats and is equipped with modern navigation and sonar capabilities.  This is clearly not an accident.