The End of the Element of doubt - NEW ZetaTalk

This booklet, reflecting official Vatican theology, was published in 2005 but then quickly withdrawn. It reappeared in 2014, in step with Pope Francis coming out with his statements on ET life, joking about baptizing Green Men and the like. If this type of disclosure continues, will it make a different in the Element of Doubt rule? At present, if the Element of Doubt rule requires that a dirty nuke go off so that ET interference not be obvious, this would be allowed. But could this type of disclosure make it easier for benign alien to openly interfere?
[and from another]
Intelligent Life in the Universe: Catholic belief and the search for extraterrestrial life
Br. Guy Consolmagno, SJ
http://www.vofoundation.org/books-and-media
Originally published by the Catholic Truth Society in London, and long out of print, this pamphlet outlines what we know about the search for intelligent life, both how we search and why we search, and what it can mean for Catholics and our understanding of our faith.
[and from another]
Pope Francis “We Are Not Alone in the Universe”
April 14, 2014
http://catholicendtimetruths.com/pope-francis-we-are-not-alone/14/0...
Pope Francis with great ease and amazement among the faithful present reveals: “Dear brothers, I wanted to tell all of you that we are not alone in the universe. Science has already made so much progress and will most likely soon will know our new brothers and sisters with whom we will exchange a sign of peace. On that day there will be wonder and remember that God is one and watching over us all.” 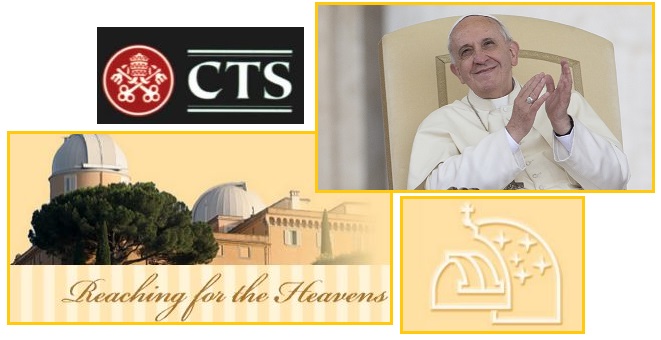 SOZT
Clearly Pope Francis
http://www.zetatalk.com/newsletr/issue397.htm
wants his flock to be comfortable with the idea of extra-terrestrial intelligent life, that such creatures have souls and should not be cause for alarm. The prior Pope Benedict was of the opposite opinion, and buried such discussion in committee within the Vatican. Thus it should be no surprise that a Vatican booklet published in 2005 on the matter would be withdrawn quickly by Benedict but republished in 2014 under Francis. Public opinion polls showed that the populace was not waiting to be led to these conclusions by the church. Instead, the church was being left behind.

World leaders have been pressing for disclosure for over a decade, in part because UFO sightings, glimpses and photos of alien bodies, and evidence of past and present life on Mars were pushing the discourse. But in part because leaders like Putin (who has his own alien advisor)
http://www.zetatalk.com/ning/14de2013.htm
and Obama (who is a Star Child) know that the populace of the world will be so much better off with open admission on the alien presence. Assistance from the alien presence would no longer need to be modulated by the Element of Doubt,
http://www.zetatalk.com/awaken/a12.htm
potentially, thus allowing aliens to openly assist mankind if the Rule of Non-Interference allowed.

The Element of Doubt rule is in place primarily to prevent mass slaughter of contactees during the Awakening period. The establishment – the powerful and wealthy and religious leaders – wanted mankind to continue to fear them,
http://www.zetatalk.com/ning/26ma2012.htm
to respect the power they had over their lives and their afterlives, and feared that awareness of the alien presence would diminish that. Therefore, the public was encouraged to either think that aliens did NOT exist or to fear contact with them. This conundrum meant that obvious assistance from aliens had to be denied or camouflaged.

This situation is gradually changing, as the number of contactees worldwide has surpassed the 50% point, with over half the population giving the Call and receiving contact. This increasing awareness and lack of anxiety is allowing the Element of Doubt rule to ease back, so that the rules
http://www.zetatalk.com/newsletr/issue432.htm
of how aliens can interact with mankind is covered by the Rule of Non-interference
http://www.zetatalk.com/index/zeta120.htm
with mankind’s right to make and express his orientation decision and other pertinent edicts the Council of Worlds may issue. For instance, the 7 of 10 pace was slowed to allow Obama time to effect the announcement re Nibiru, and the Council of Worlds went to war with the cover-up crowd.

Prior 2010 ZT: http://www.zetatalk.com/index/zeta569.htm
In the past we have stated that this was in the hands of man, and all concerned should take steps to contact power station operators asking them to shut down their plants at the first sign of a pending pole shift. We have also intimated that since the Earth was to be home to ourselves and other visitors in the future, we were being allowed to take steps to prevent nuclear pollution, so that disarming nuclear weaponry was in process. Nancy can attest to this, as during her engagement with MJ12 she was present at a demonstration whereby we poured a clear liquid into a radioactive vat and neutralized it. The great powers, the US and Russia, deny this is happening to their weaponry, so that they can posture as nuclear powers. Their weapons are being neutralized whether they want this or not. Recently, when asked about power plant operations, we have intimated that by giving the Call, en mass, many voices concerned about the effects of nuclear pollution on innocents, Chernobyl redux, that the Council of Worlds granted ourselves and others the right to step in and assist. Such is the power of the Call, out of love for others by those in the Service-to-Other. This does not mean that mankind should relax. This means that the pressure should not be abated.

Prior ZT: http://www.zetatalk.com/ning/26ma2012.htm
Man did not live in fear of UFOs or encounters, but rather had curiosity. What created fear in the public was the campaign mustered by MJ12, where scare stories were featured in the media, in TV series, and in movies developed for the establishment by a compliant Hollywood. The movie Signs by Mel Gibson, Falling Skies, Independence Day, War of the Worlds – all tell the public that aliens will arrive and try to poison them, enslave them, or eliminate them.  None of this is true, and the establishment knows this, yet keeps up the disinformation. The Element of Doubt is in place primarily to prevent panic in the establishment, who would harm the public in their desperate attempts to cling to their status.

Prior 1995 ZT: http://www.zetatalk.com/awaken/a12.htm
The rule is, and will be for the near future, we keep the issue constantly before the populace, with a steadily increasing level of discussion, but always, always, with an element of doubt. This element of doubt is necessary during the Awakening so your populace does not become unduly alarmed. What we seek to avoid is the nervous breakdown, the fear in friends and co-workers raising to such a level that they take violent steps against the reporter, or the intensity of fear in the observer that would make them susceptible, incline them, toward giving The Call to the Service-to-Self. For this reason visitations are currently recorded only in the subconscious. The is what the Awakening desires, a gradual comfort level increase, without any contactees being burned at the stake by hysterical religious leaders whose turf has been threatened.

Prior 1995 ZT: http://www.zetatalk.com/poleshft/p23.htm
The Earth is in 3rd Density, and by the Rules of Non-Interference we are required to watch and not interfere. Unless humans take steps to disarm their nuclear weapons and properly shut down their power stations, radiation poisoning will undoubtedly take place. Our assistance prior to the cataclysms is therefore dependent on humans giving The Call.

Prior ZT: http://www.zetatalk.com/ning/19mr2011.htm
As we have explained, we are not allowed to warn of specific pending earthquakes or tidal waves, by the rule of non-interference. We have only been allowed to explain the sequence of events, which we have done for the 7 of 10 and the last weeks, in exacting detail. We knew this earthquake was pending for the North Island of Japan, but could say nothing. We also knew that the nuclear power plants would be put at risk, and their safeguards would fail. Just what steps benign aliens were allowed to take to minimize any meltdown at these plants we are not allowed to detail, but suffice it to say that the meltdowns would have been violent and extreme, and would have occurred in more plants than experienced them, had intervention not occurred. It would have been beyond a Chernobyl, affecting not only the islands of Japan but also anywhere the winds would drift, including Hawaii and the West Coast of the US and beyond.

DISCLOSURE with an ELEMENT OF DOUBT is happening NOW!

Trump doubts UFOs exist, but says ‘anything is possible’
https://nypost.com/2019/07/05/trump-doubts-ufos-exist-but-says-anyt...
President Trump said in an interview with Fox News that he personally doubts UFOs exist, but added he couldn’t definitively say unidentified aircrafts are only the stuff of science fiction.
Trump made the statement to Tucker Carlson in a pre-recorded interview, part of which was aired on Friday.
“Well, I don’t want to really get into it too much. But personally, I tend to doubt it,” Trump said in the interview, which was recorded during his trip to Korea last week. “I’m not a believer, but you know, I guess anything is possible.”
Carlson asked Trump about UFOs as the fringe theory about visitors from foreign planets has been getting plenty of attention in recent weeks. In June, three senators, including Intelligence Committee Vice Chairman Mark Warner, were briefed by the Pentagon about recent reports of UFO sightings by Navy pilots.
In his remarks to Carlson, Trump referenced the reports by the pilots.
“I mean, you have people that swear by it, right?” Trump said.
“And pilots have come in and they said — and these are pilots that have — not pilots that are into that particular world, but we have had people saying that they’ve seen things,” he added.
.uk/news/weird/1054664/alien-invasion-us-news-donald-trump-latest-s... 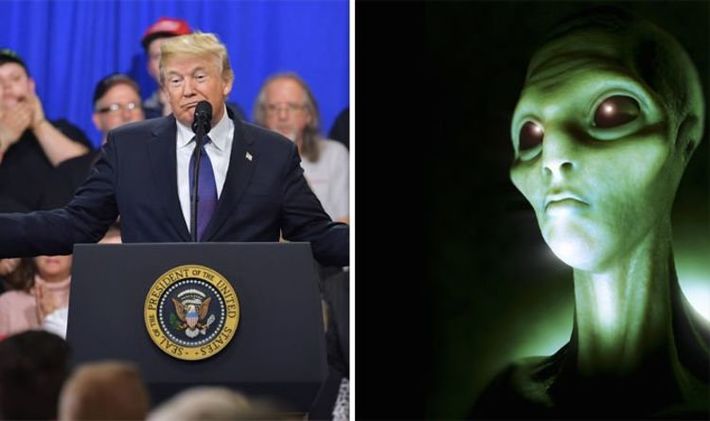