Under the Marine Mammal Protection Act of 1972 (as amended), an Unusual Mortality Event (UME) has been declared for bottlenose dolphins in the Mid-Atlantic region from early July 2013 through the present. Elevated strandings of bottlenose dolphins have occurred in New York, New Jersey, Delaware, Maryland, and Virginia. Dolphin strandings have also increased in North Carolina.

Current bottlenose dolphin strandings are over nine times the historical average for the months of July and August for the Mid-Atlantic Region. All age classes of bottlenose dolphins are involved and strandings range from a few live animals to mostly dead animals with many very decomposed. Many dolphins have presented with lesions on their skin, mouth, joints, or lungs. 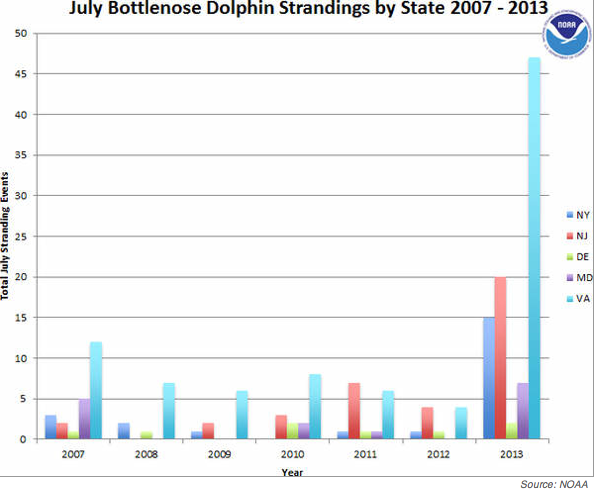 On Jul 15, 1995 ZetaTalk described how the Atlantic would stretch during the coming pole shift, and the Pacific compress. On Apr 5, 2003 ZetaTalk stated that pre-shift quakes, ongoing now, are also pulling the Atlantic apart.

The Atlantic will widen and the Pacific will shorten. Where the Pacific effect will cause sudden and violent subduction of several plates, which are already subducting, in the Atlantic the effect will be the opposite. A gulf will appear, with plates torn apart and the softer magma under the plates exposed to the cold Atlantic water. Where this will harden the magma, and establish new plate surface, there will be less support for the abridging plates, those that attach however remotely to the shorelines of the Americas, Europe, and Africa. These non-supported plates will sink, somewhat, bringing their formerly above-water land masses down under the water in many places. As an instance, Europe and in particular the western islands of Britain and Ireland will find itself more affected than some other parts of the globe.
ZetaTalk: Sinking Atlantic, written Jul 15, 1995
Stretching along the Atlantic has been recorded during 2002, when trail derailments, exploding buildings, and sudden sinking of land occurred. In the Pacific, compression has resulted in increasing volcanic activity along the ring of fire, but also in movement of the continents in the direction we have predicted they would move during the shift! Stretching results in quakes, as the plates underneath, in layers like flaky pie crust, release. Stretching results in land not supporting prior buildings or roads or bridges, which suddenly collapse. Stretching also results in volcanoes oozing more lava, or if the skin of the Earth thins, an explosion. This could occur in all those areas we have listed as expected to rip greatly: Red Sea, African Rift, etc.
ZetaTalk: Pre-Shift Quakes, written Apr 5, 2003