I see well over 150 sunrises and sunsets every year as I commute at those times of the day to my school-year job. I have been watching in the past year in particular to watch for tail/dust sightings, but because I live in the hills, it is often difficult to get a direct line of sight to the sun at the perfect moment. Since the end of January, I have been observing something I have never seen before. At sunset, I have been looking to the east (I drive home north-east at that time) - AWAY from the sun, and seen some very peculiar events in the sky. Keep in mind these are all opposite from the setting sun.  January 27, 2015 - seems like either a light source to the east is blocked in the middle, or rays from the setting sun are significantly blocked (not by a mountain or cloud as I could tell). February 9, 2015. This is EAST at sunset - looks like a light source projecting rays up onto the clouds (sorry for blurriness). Feb. 10, 2015. Same appearance as evening before, but on the flats east of the Black Hills. Easy to see against the cloud layer, again, looks like a light source in the EAST at sunset. I don't know if these are caused from tail dust, or a phenomenon that I just never noticed before. A quick search on Google shows others are spotting this as well. YouTube video from Dec 2011. This is exactly what I am seeing in South Dakota. Another video on bikermusic.net, from 6/25/2014. I would really appreciate gaining an understanding of these rays of light, so I can point it out to others as evidence if it is related to Planet X. [and from another] https://www.youtube.com/watch?v=9Y62vbxFNXI  12/3/2011. NSW Australia. Mysterious light source in the east at sunset. [and from another] https://www.youtube.com/watch?v=PvWqJQwgA3Q  Published on Jun 29, 2014. The Sun had already set. This occurred on 6/25/2014 at 8:34pm. I was driving North. This is a result of Nibiru; the whole northeast was lit up for about 20 minutes. Some of the clouds even looked like cloaked "UFOs." It was amazing. [and from another] https://twitter.com/HargoFett/status/515667547144728576?s=09  I tweeted some similar pics looking East at sunset a while back, in Denver CO. 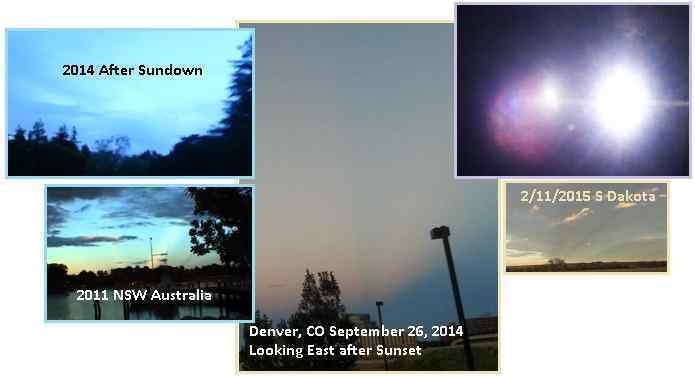 The light from the Planet X complex is most often noted in the Moon Swirls, which form long tubes funneling light down their length so the intensified light comes out the end like a flashlight. When seen, the light from the end of a Moon Swirl is far more brilliant than any from Planet X itself. Planet X itself is closely shrouded in dust, so sunlight bounces back toward the Sun and Planet X is seen more as a dark fuzz ball. The tail of Planet X is blown from the right, where Planet X rides when seen from the Northern Hemisphere, to the left of the Sun. This can consistently be seen in Alberto’s photos. During the day this is seen as an extra bright sky, the Sun too intense. But after sunset, when Planet X and the Sun have dropped below the horizon, light reflected from the Moon Swirls remains.