I'm wondering if this phenomena is going to expand so that humanity will lose the net over time. Is this the beginning of that process where the ZT's told us to keep a computer and get a ham radio? Anything else we need to learn on this? [and from another The Spacecraft-Killing Anomaly over the South Atlantic February 19, 2021 https://astronomy.com/news/2021/02/hidden-spaceflight-danger-the-so... Computers and instruments aboard Skylab, the International Space Station (ISS), the space shuttle, and even SpaceX’s Dragon craft have all experienced glitches or other issues when passing through the SAA. [and from another Terrawatch: the South Atlantic Anomaly – a Growing Weak Spot in Earth's Magnetic Field January 6, 2021 https://www.theguardian.com/science/2021/jan/06/terrawatch-the-sout... One sign that the Earth might be gearing up for a magnetic reversal is a weakening of the field. We know that the Earth’s magnetic field has decayed by about 5% per century since measurements began in 1840. And much of that decay is associated with a strangely weak spot between South America and southern Africa, known as the South Atlantic Anomaly. This patch has grown over the last 250 years and today the weak field messes with satellite technology. 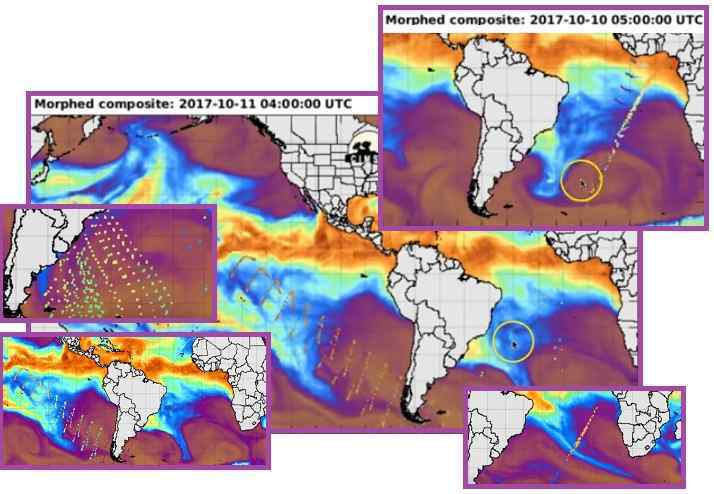 We have stated that the South Atlantic Anomaly (SAA) is acting as the Earth’s new magnetic S Pole, as graphically shown in 2017 on the MIMIC satellite images. The S Pole is a magneton intake, and thus tries to position to be opposite to the magnetic N Pole. As the magnetic N Pole of Earth is being pushed from the Arctic toward Siberia, the normal position for the Earth’s magnetic S Pole moves from its location near Tasmania to the location of the SAA. As the wobble has worsened, the SAA has likewise increased in strength.

As the cover-up over the presence of Nibiru continues, nonsensical excuses such as a polar reversal are put forth to explain the SAA. Of course this explains nothing. What causes such a reversal? They have no cause, just a claim. It is the presence of Nibiru pushing on the magnetic N Pole of Earth that will cause the coming Pole Shift, where the crust of the Earth will slip and slide 90 degrees, thus pushing the Bulge of Brazil to the N Pole location, and pulling India to the new S Pole location. Meanwhile, whither mankind’s electronics in space when passing over the SAA?

Electro-Magnetic Pulse (EMP) disrupts mankind’s electronics by a brownout or pulse, often ruining the equipment in the process. Satellites or the equipment aboard the ISS are vulnerable. During its migration toward India, the SAA is passing over a rupture in the crust. The Atlantic is being pulled apart during the S America and Africa rolls, removing the protective crust so the magnetic core of the Earth is more exposed. This trend will only worsen. We have stated that mankind’s satellites will all be torn from the skies during the pending Pole Shift. They will become non-functional well before that time.