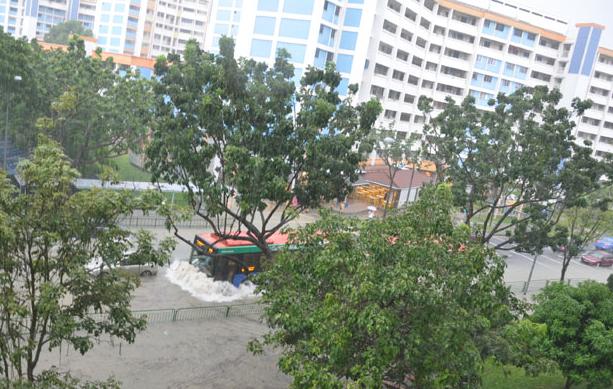 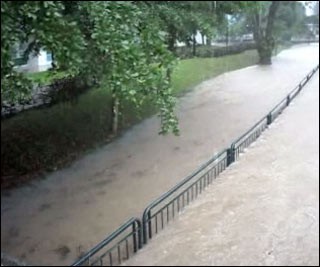 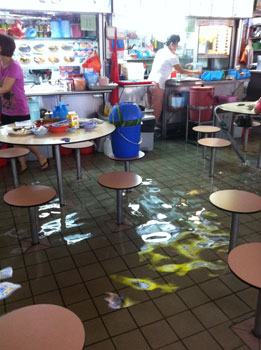 According to the National Environment Agency (NEA), the highest rainfall recorded as at 5.30 pm was 91.4 mm at Kent Ridge in the West Coast area.

The afternoon heavy downpour caused a canal at Block 611 in Clementi West to overflow.

One resident at the area said he's never seen anything like this in all his 10 years living there.

"When I saw it, I find it very dangerous, because the volume of water was huge; it carried a mass of water, and the current was moving very fast and splashed very strong waves on to the bridge here," said Mr Lim, a Clementi West resident.

Mr Lim said the flood lasted for about 45 minutes.

He said: "All the small drains are all submerged and the water splashed into the HDB block, and all the trees, plants are all half submerged."

National water agency PUB said the flash floods were due to the intense rainfall and high tide of about 3 metres on Saturday afternoon. And this was what caused the Sungei Pandan Kechil canal to overflow.

Flash floods also occurred along the AYE towards ECP and at Neo Pee Teck Lane, but they subsided within 20 minutes.

The flash floods along the AYE towards ECP caused two lanes to be affected while one lane remained passable.

PUB said the length of the affected section was about 100m and water depth was about 15cm.

At Neo Pee Teck Lane, two lanes were affected. The length of the affected section was about 90m and water depth was about 30cm. Water from the road went into the porch of two houses there.

The area is a flood-prone area and PUB has already scheduled drainage improvement works there. The works will start in the first quarter of 2012.

PUB said Saturday's downpour peaked at 1.20pm - 1.50pm during which 52.6mm of rain fell. The rate of rainfall peak intensity during this period was about 105.2mm/hr.

Several STOMPers have reported occurrences of flash floods in the Eastern region of Singapore on Sunday evening (Nov 13).

These floodings comes on the back of ankle-deep floods that occured in several parts of western Singapore yesterday (Nov 12).

Heavy rainfall has caused flooding in the carparks and open areas of Bedok Reservoir Road.

“Flooding at area opposite Block 122 on Bedok Reservoir Road.”

“It was raining heavily at Bedok Reservoir Road between Block 614 & 613.

“The car park is now flooded with mud water -- you could only see half of the tyres on the parked cars & motorcycles!”

“First flood in the area since I moved over here more than 10 years ago.”

“It's raining and flooding in the Bedok Reservoir area.”

Meanwhile, the floods have prevented a bus from moving on the road in Eunos.

“The flood in Eunos was so serious that the bus couldn't move!”

“The sudden downpour has resulted in a flash flood inside the McDonald.

“The patrons there were taken by suprise by the speed of the flooding and were left stranded at their tables.

“Most had to contend with just lifting their feet and hoping for the best."

SINGAPORE - Many parts of Singapore were hit by flash floods as a result of heavy rain over the weekend.

The heavy downpour yesterday caused the basement carpark of Varsity Park condominium in West Coast to be flooded.

The bumper-high water level was reminiscent of another case last year at Tessarina condominium in Bukit Timah, when luxury and sports cars in the basement carpark were submerged.

A tenant at Varsity Park condo who was interviewed by the Straits Times said this is the first incidence of flooding in the development.

Flash floods hit various parts of Singapore at 1.40pm yesterday, with the highest rainfall recorded as 91.4mm at Kent Ridge in the West Coast area.

The heavy rain yesterday also brought down a tree in Tiong Bahru, which landed on a taxi. No one was injured in the accident.

Ankle-deep flood waters were also reported at a bus stop and hawker centre in Clementi, and a void deck in Pasir Ris.

Heavy downpours were also experienced in many parts of Singapore on Sunday (Nov 13). The rain caused flash floods in the eastern part of Singapore, with parts of Bedok Reservoir Road and East Coast Parkway being flooded.
http://news.asiaone.com/News/AsiaOne%2BNews/Singapore/Story/A1Story... 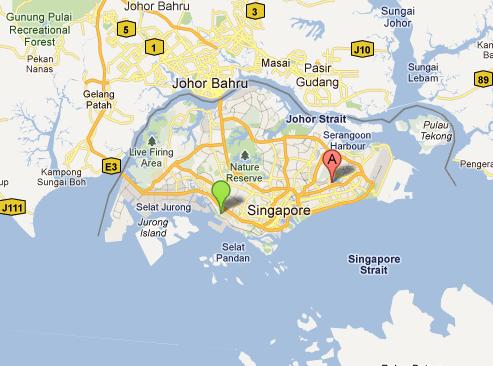 STOMPer Paul is concerned by this large sinkhole which appeared recently near his home. He wonders if it was caused by MRT line construction nearby.

“I'm a little concerned about a large sinkhole that has appeared next to my condominium on Hillview Avenue.

“There is considerable construction of the new MRT line near us. Although I don't know if one is linked to the other it is a little scary especially considering its proximity to our residence.

“I thought I'd see if anyone would mention it."