I would like to ask the Zeta whether these rumors are launched by the establishment in order to see how population would react to the announcement? [and from another] And the elite trying to cover the probable announcement to make it look completely stupid. [and from another] What have zetas and Nancy have to say about this "unprecedented cosmic wave" that supossedly will hit the Earth on September and will ascend the humanity? Is this man a legitimate contactee? There is somewhat true about what he is saying? [and from another]http://edition.cnn.com/2015/08/20/us/asteroid-nasa-no-threat-feat/i...  Dear Earthlings, stop worrying about an asteroid collision in September. That's the message from NASA, which countered a viral rumor Wednesday with a news release. [and from another] http://www.nasa.gov/jpl/nasa-there-is-no-asteroid-threatening-earth  NASA detects, tracks and characterizes asteroids and comets passing 30 million miles of Earth using both ground- and space-based telescopes. The Near-Earth Object Observations Program, commonly called "Spaceguard," discovers these objects, characterizes the physical nature of a subset of them, and predicts their paths to determine if any could be potentially hazardous to our planet. There are no known credible impact threats to date -- only the continuous and harmless infall of meteoroids, tiny asteroids that burn up in the atmosphere. [and from another]http://www.dailymail.co.uk/sciencetech/article-3204864/Relax-world-...  In response to a rumor that has gone viral around the world, the US space agency has insisted claims that an asteroid will hit the Earth in September have 'no scientific basis'. The predictions were first made by an online community of biblical theorists who claimed the space rock will hit sometime between 15 and 28 September. Internet rumors based on a 2010 prophecy by a self-proclaimed prophet have predicated an asteroid will hit the ocean near Puerto Rico in September. According to its Near-Earth Object Observations Program, which scans the skies for potential threats, there are no asteroids or comets that could impact the Earth anytime in the 'foreseeable future. In fact, of all known potentially hazardous asteroids, there is a 0.01 per cent chance one of them will impact Earth in the next 100 years. [and from another] http://www.inquisitr.com/1813936/asteroid-impact-apocalypse-2015-ma...  Following a series of warnings from doomsday prophets, there is increasing convergence of opinion among believers that an asteroid apocalypse will occur in September, 2015. The growing mass hysteria appears to have originated with a self proclaimed “prophet,” Rev. Efrain Rodriguez, who claimed he sent a letter to NASA on Nov. 12, 2010, titled “Letter to the Space Agency… meteor heading toward Puerto Rico.” In the letter, he claimed he had received a message from God that an asteroid that would “soon be seen in the alarm systems of NASA” was approaching. He said the asteroid would hit the ocean near Puerto Rico and cause a massive earthquake and tsunami that would devastate the East Coat of the U.S., Mexico, Central, and South America. With the conspiracy theory community looking out for “signs” of the impending catastrophe, the statement by the French Foreign Minister Laurent Fabius, in May, 2014, that the world had only “500 days to avoid climate chaos” was interpreted widely as a veiled asteroid impact disclosure statement. Soon enough, a full blown end-time prophetic statement that originated from a number of sources in the end-time conspiracy theory community had identified September 23-24, 2015, as the asteroid impact apocalypse day. The prediction was directly inspired by Fabius’s purported “veiled warning” that the asteroid apocalypse would occur in about 500 days. A number of “prophets” had simply grabbed their calculators and with the help of a calendar, and an estimate of 500 days to the apocalypse, determined that the asteroid impact would occur around the time of on the Jewish Day of Atonement in 2015, that is, on September 23-24, 2015. [and from another]http://micahangel.weebly.com/  Over the last ten years we have raised the Schuman Resonance which is the frequency of the Earth. 1/3 of humanity will be at dimension 5 on 9282015! (9/28/2015). 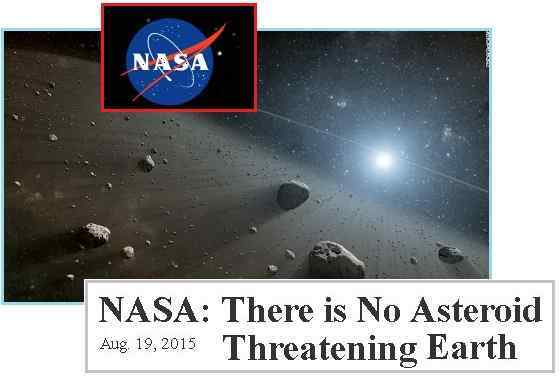 What is the intent behind the prophecies and interpretations being pushed on the Internet about a September 23, 2015 asteroid strike? The soup of disinformation includes:

All this was rolled into a pie and baked on the Internet. By whom, and why? NASA periodically talks about Near Earth Orbit (NEO) asteroids and their plans for defense, and have brought this down on themselves thus. In the past they have used asteroids as a cover for the debris in the tail of Planet X, aka Nibiru, and in step with the tenacious cover-up over the pending passage of Nibiru, were not about to tell the truth. Now the announcement is pending, perhaps even scheduled for late September, and the asteroid fear mongering is being used against NASA.

The people actively promoting the September 23 asteroid rumors seek to cloud the announcement over a legitimate threat – Nibiru’s pending passage – with this nonsense. No asteroid will strike nor pass close, and they hope that by confusing an asteroid threat with Nibiru itself, that the announcement will be belittled and cast aside. Oh, that, the public will say, it was only an asteroid hit that did not occur. Thus the REAL threat, which the public should take seriously, will be ignored. The group pushing this disinformation is identical to the cover-up crowd. This group wants the public to remain ignorant until the end for the convenience of the elite.