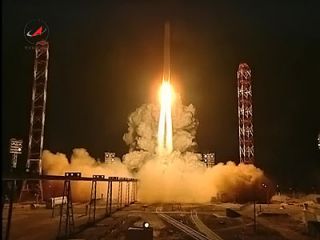 "The satellite failed to go into its orbit. A state commission will investigate the causes of the accident," the spokesman of Russia's space forces Alexei Zolotukhin told the Interfax news agency.

The Meridian communications satellite "fell to the territory of Siberia" after its launch from the Plesetsk cosmodrome due to a third stage rocket failure, the Interfax news agency said, quoting a space industry source.

The RIA Novosti agency said it had come down over the region of the western Siberian town of Tobolsk although it was not clear if the satellite had made contact with the ground or burned up in the atmosphere.

It was the fifth launch of a satellite from the Meridian series which have dual civilian and military use and are aimed at providing communications for ships in the Arctic as well as Russia's remote Siberia and Far East regions.

The satellite had been launched by a Soyuz-2.1B rocket, part of the family of Soyuz rockets that has been the backbone of Moscow's space programme for decades and still launches humans to space.

The satellite was supposed to have separated from the rocket about nine minutes after its launch, the ITAR-TASS news agency reported.

But the carrier rocket experienced undisclosed problems even before the separation attempt, meaning that it never reached the low Earth orbit.

The loss of the Meridian satellite caps a disastrous 12 months for Russia that has already seen it lose three navigation satellites, an advanced military satellite, a telecommunications satellite, a supply ship and a probe for Mars.

Its image was severely tarnished with the loss of the Progress supply ship, which crashed into Siberia shortly after launch in August for the International Space Station (ISS).

Russia has also acknowledged the almost certain loss of its Phobos-Grunt probe for Mars's largest moon, which was launched on November 9 but has failed to head out of Earth's orbit on its course to the Red Planet.

"Why would Russian satellites be taken out before they reached their orbit while NASA’s Mars rover Curiosity be allowed to land on Mars? The answer lies in the resulting benefit to the common man, vs a vs the elite. There are many agendas behind the Mars rover, but the only one that will come to fruition will be to announce the discovery of life on Mars. Methane from rotting organic material, bacteria and mold, and perhaps even living worms in the soil. The elite are trying to force Obama to get the US taxpayers to pay for manned missions to Mars, and this will hardly work given the current state of the economy and the pace of the Earth changes. But the Awakening to the alien presence will be facilitated.

Russia was recently smacked by the Council of Worlds for trying to probe Phobos, a moon of Mars where the Annunaki have been mining for gold. The Annunaki and mankind are quarantined from contact with one another, and the Russian’s know this. The Telekom-3 communication satellite that was disabled was hardly designed to facilitate communications, it was intended to spy on desperate and drowning migrants heading toward Russian territory, the better for Russia to disable THEM.  What is in the minds of man, the intent, is known to ourselves and other benign aliens. The very obvious UFOs involved in disabling these spy satellites were a clear message to the Russians."

The launch is all but certain to raise fresh issues over whether Proton Breeze-M manufacturing team has workmanship quality issues that were not addressed by the inquiries into the failures of August 2011 and August 2012.

The Dec. 9 failure poses serious problems for Mexican satellite operator Satmex, whose Satmex 8 satellite arrived at the Baikonur Cosmodrome in Kazakhstan, where Proton is launched, on Nov. 29 to prepare for a Dec. 28 launch.

The December launch date now looks out of reach. Satmex badly needs Satmex 8, which is intended to replace the Satmex 5 satellite. Satmex 5 is expected to run out of fuel in May. If Satmex is unable to provide immediate replacement capacity for its Satmex 5 customers, they are likely to go elsewhere and compromise Satmex’s already fragile financial condition.

The 4,600-kilogram Yamal 402, like many satellites launched solo on the Proton rocket, was fueled to capacity and is likely to provide several years of commercial service despite now having to climb further than planned to reach its operating orbit. How many years of life will be available to it remained unknown in the hours after the launch failure.

Moscow-based Gazprom intended to place Yamal 402 into an orbital slot at 55 degrees east.

Reston, Va.-based ILS said a Russian government inquiry board would be established, along with an independent ILS board, to investigate what happened.

ILS and Roscosmos said initial indications are that the Breeze-M upper stage shut down four minutes early during the last of a planned four burns to carry Yamal 402 into geostationary transfer orbit. The fourth burn was scheduled to last nearly nine minutes.

The rocket was intended to place Yamal 402 into an orbit with an apogee of 35,696 kilometers and a perigee of 7,470 kilometers, with the orbit at a nine-degree inclination relative to the equator.

The Breeze-M failure released the satellite into a perigee of around 3,100 kilometers, with an inclination of 26 degrees, according to early indications.

Industry officials remarked after the August 2012 failure — when two Russian satellites, one for commercial fleet operator Russia Satellite Communications Co. (RSCC), one a commercial telecommunications satellite for Indonesia’s Telkom — that Proton’s recent launch history is disastrous for Russian operators, but not so bad for non-Russian ILS commercial customers.

The August 2011 failure caused the loss of a large RSCC-owned satellite.