Could the Zetas say something about this, as I think it's more then just sand from the Sahara? [and from another] http://www.telegraph.co.uk/news/2017/10/16/strange-red-sun-phenomen... Did you wake up to a ghostly red sun today? Many people in England reported the phenomenon on Monday morning - and it appears to have been caused by Hurricane Ophelia. [and from another] https://t.co/ZxDuvjQlUH What’s with the #red #sun in #Somerset this morning? Influence of #hurricane #Ophelia? Jacqueline Breslin (@re_envision101) 16 oktober 2017 [and from another] https://www.thesun.co.uk/news/4695254/hurricane-ophelia-red-sun-yel... The gales pulled Saharan dust north to the UK to create a blanket of orange cloud, with the deadly storms also bringing powerful 80mph winds - killing three people. The layer of thick dust brought an eerie glow across the sky and turned the sun red as Hurricane Ophelia killer winds picked up dust and debris southern Europe and Africa. 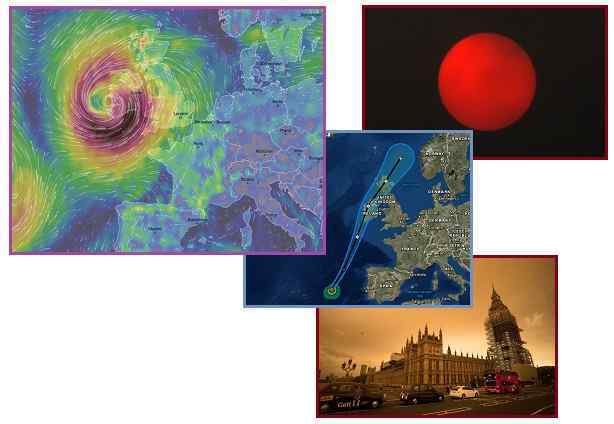 Dust from the Sahara has been the excuse for red dust in the tail of Nibiru for over a decade, but there have been reports and photos of red dust on cars and snow and outdoor furniture worldwide since 2003. A yellow cast to the skies is a known symptom of tornado weather, as dust is pulled up into the upper atmosphere, and hurricane winds can do the same, but a red hue in the middle of the day is not possible. At dawn and dusk, the curve of the Earth allows light in the red spectrum to be dominant, as it is pulled into a curve by the gravity draw of Earth. Hurricanes do not do this.