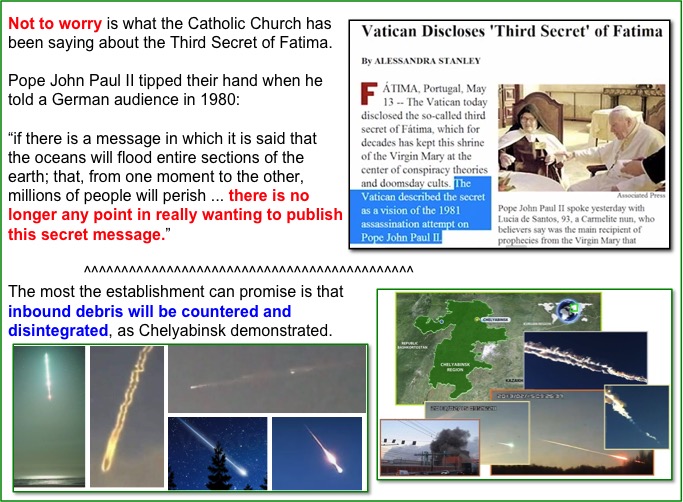 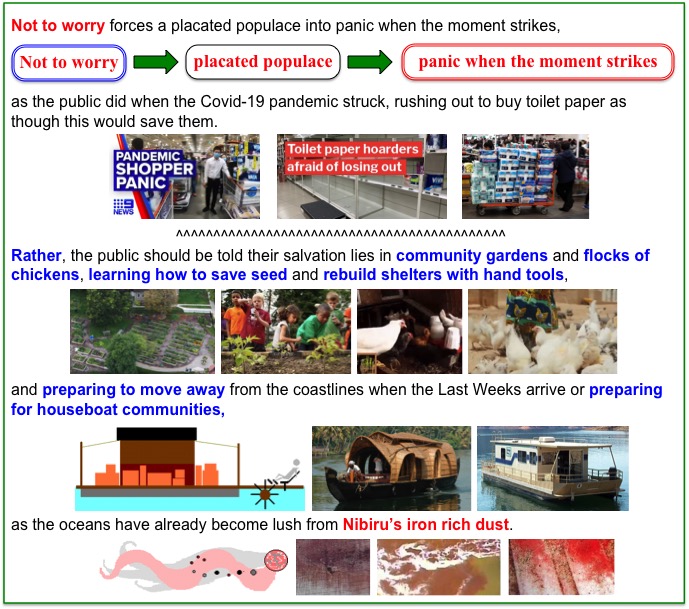 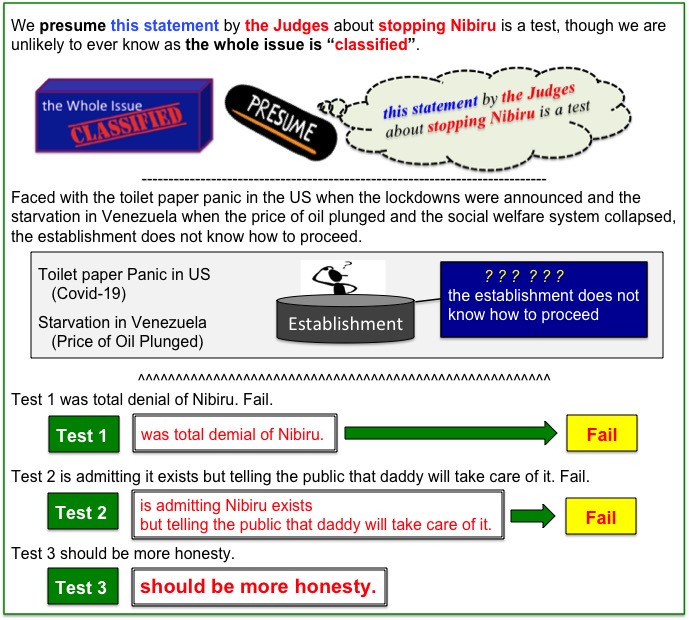 This is a channeled work from a woman, whom the Zetas confirmed had the right notion about the humming boxes when they first appeared in Oregon. http://www.zetatalk.com/7of10/7of10108.htm She has taken great umbrage at the concept of a sudden Pole Shift, as the Zetas say within an hour, and gone so far as to state that anyone saying this is a “malevolent” force. Yet she was warned privately to get an RV and be prepared to leave the coast on a moment’s notice. There has been an alignment of agreement until now. Why the sudden difference of opinion and insults? I feel Nancy should address the ET intercession with Pole Shift itself by re-examining the issue. [Begin Channel, in part] Why would we wish for you to go thru this destruction and end life and civilizations where you have all then accumulated your greatest potential for advancement in your Sciences and Technologies, Understanding of the Cosmos and moving for Spiritual Growth and Unity. Would we not protect you from self-destruction or from an outside Cosmic threat or Nuclear Wars, when you are so valuable to us as a Human Species, as an accumulation of all your past Life's, as an accumulation of all your past Wars, as an accumulation of all your past Enlightenment and the age of darkness. We have always guided the Human Race from the beginning of time to the present moment, and would "not" allow this destruction that is being brought about and manifested by the collective minds guided by malevolent Luciferian Forces to "Destroy You" and to destroy this planet. But this (Planet-X/Nibiru) has been cleared.  It has been placed outside of its own "Orbit" further from your Earth. We say that it is a possibility of a "Pole Shift" but "Not" in this manner in which they wish the Human minds to manifest it to be. There is a possibility of this Mind Pole Shift, caused by an exchange of Nuclear Weapons throughout your world. If they are not prevented there would be a chain effect that would then unbalance the rotation of your Earth. But what is being spoken of is a "Sudden Pole Shift", the "Sudden" Pole Shift can only be thru the destruction and use of your weapons.

There are some similarities in this channeled work by a valid Pleiadean channel and what ZetaTalk has stated. There are also points where we differ, and differ greatly.

For instance, we have stated that nuclear weapons have long been disabled so they are no longer weapons, though if challenged by the need to retain the Element of Doubt would be allowed to explode. This has been in the body of ZetaTalk for years. This intercession is because the Council of Worlds has responded to the collective Call from many people. Since nuclear war is not possible, in this situation, our predictions differ from this Pleiadean channel. 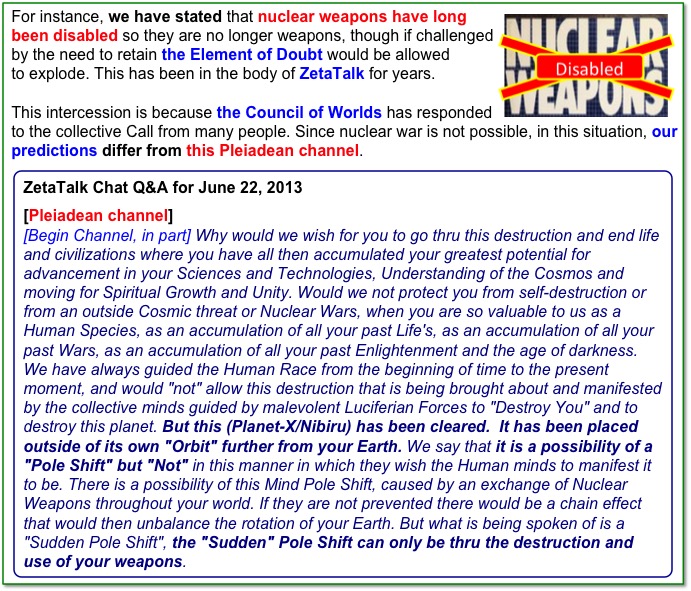 It is likewise true that the rapid progression of the 7 of 10 plate movements was slowed to a crawl, because the Council of Worlds saw the potential for a break in the cover-up, and did not wish massive death from 7 of 10 plate movements when the populace had no opportunity to have a spiritual lesson, no opportunity to react. Slowing the plate movement required more than the humming boxes placed along fault lines. Planet X was positioned more to the side, to the right of the Earth, than it should be during the 7 of 10 process, as noted recently in our ZetaTalk chats. This is why there is a more severe wobble at this time, yet slower plate movement. 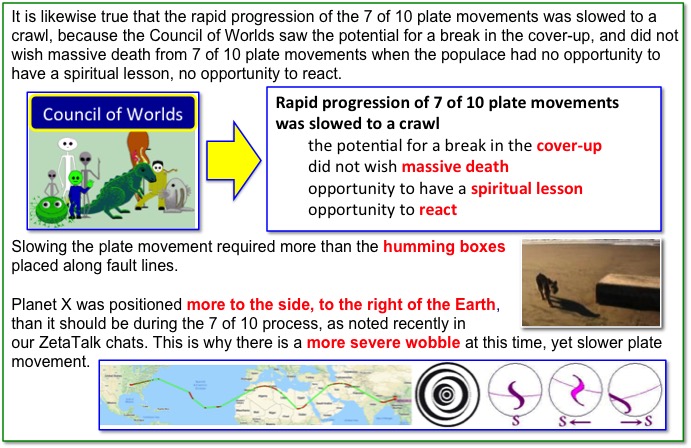 It has long been known that all in the Service-to-Other do not agree on how mankind should be influenced at this time. The Pleiadeans are notorious for downplaying the coming Pole Shift, preferring to deliver a message of denial so as not to elicit anxiety and fear. Our approach has been to tell the blunt truth, so mankind will not be shocked but can prepare to assist others in love throughout the cataclysms, being emotionally prepared.  Both we and they are Service-to-Others, but differ in our approach. Where the Pleiadeans prefer to emphasize rescue, we prefer to emphasize that mankind is to rise to the occasion, growing spiritually by helping others. 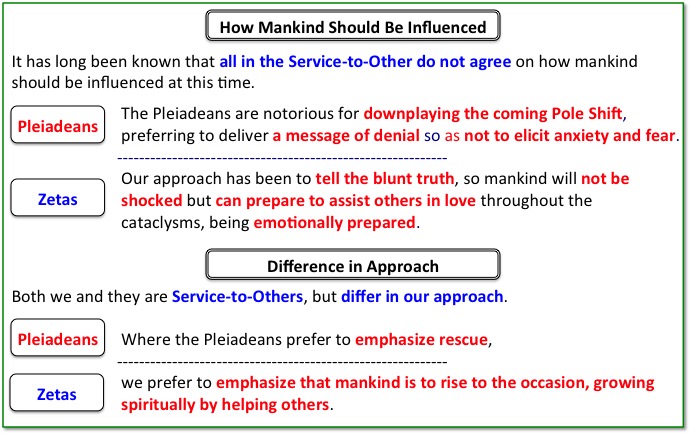 The Pleiadeans know that Obama and his allies around the world are prepared to inform mankind that Nibiru, aka Planet X, does indeed exist and is positioned for a passage past Earth. It is ZetaTalk, ourselves, and our message that will get the attention due to our 17 years of accurate predictions and worldwide fame. It is clear which Service-to-Other group will get to influence mankind, and the losers are resentful, calling our warnings “malevolent” as they feel a blunt message will increase fear and a lean toward Service-to-Self thoughts. In this channeled report, the Pleiadeans are promising rescue to all when this has not been granted by the Council of Worlds. 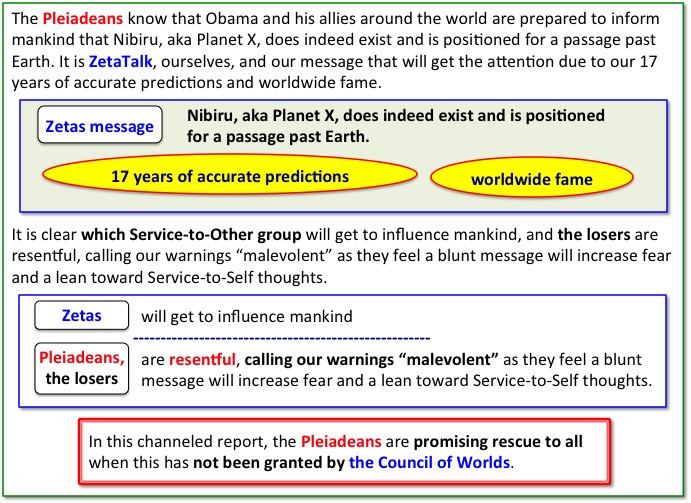 The Pole Shift has never been, and will not be a tea party as the Pleiadeans promise. For mankind, the future times are not going to be comfortable, but bad tidings to be dealt with. For mankind, the loving thing to do is prepare for the coming Earth changes and react to the distress of others, assisting them. In our view, it is not a proper act for the Pleiadeans to reassure mankind that no harm will come to them, when clearly man has always dealt with volcanoes, tornadoes, earthquakes, tsunami, and giant predators. For mankind, any intervention by benign alien forces will be as a reaction to their own Service-to-Other endeavors and thoughts. Rescue must be earned, not assumed. 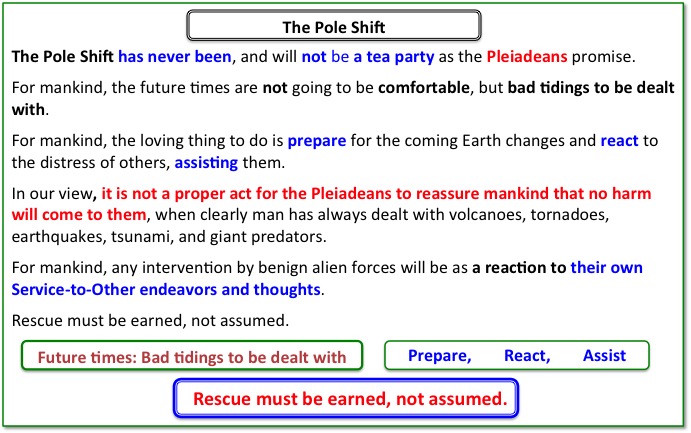 Many channelers purport to be relaying information from the Pleadians, far out of proportion to the Pleadian influence on Earth at this time. The reason for this choice, among the many channelers who are faking it, is that the Pleadians are gentle speaking, not blunt, and focus on feel-good messages. It's all rather like the preamble to a sermon, without ever arriving at the sermon. It's like attending lectures without ever having to take an exam. The Pleadians don't relay messages that make humans uncomfortable, that's not their chosen role. They're greeters, the nice guys, easing humans into the concept of an alien presence with pleasantries. Consequently, those who claim to be channeling Pleadians don't get challenged to prove it, as no one is uncomfortable.

The drawback to the plethora of false channelers is the plethora of inaccuracies that follow. Barbara Marciniak claims to channel the Pleadians - she doesn't. She claims an ancient civilization lives in Antarctica - none does. She claims entities called Game Masters create civilizations - they don't. This is not to say that everything she might write would be a falsehood, it's just that it couldn't be trusted. 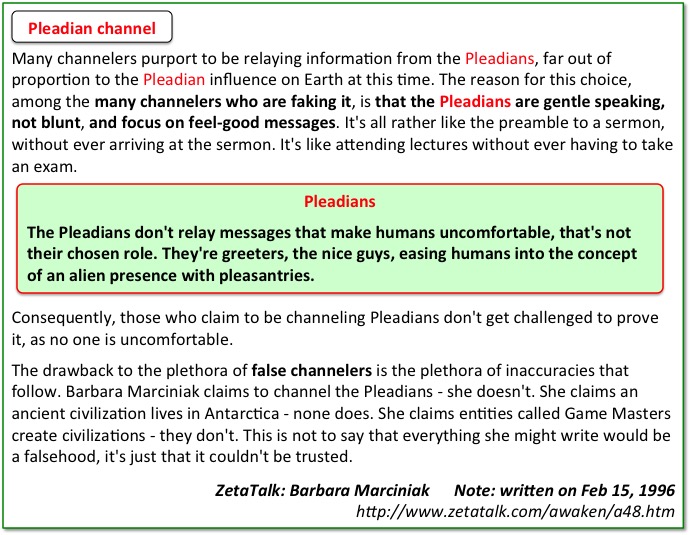 Aliens in the Service-to-Other orientation avoid lies except in the white lie category, to avoid hurting another with facts they do not need to know. This is why the Pleiadeans do not talk about the pole shift, as they view this as an occurance humans can do little about, so why distress them with this news and ruin their day. We, the Zetas, are considered humorless and blunt, without emotion, as we avoid these types of white lies, almost entirely.

Conscious contact will be made between contactees and their familiar visitors, not among strangers, although the hybrids are interacting with visitors from elsewhere in many social settings. It is not true that our contactees consider us cold and the Pleiadeans warm, as one is either a contactee of one group or the other, so there is no basis of comparison! Nor do those who are visited by greasy toads or reptilians with many legs consider their visitors cold. It is the vibes from the soul and empathy from the creature for the wellbeing of a human who is struggling with their 3rd density existence that is sensed. Bad PR against the Zetas has been attempted for many years, because of our dominant stance against the establishment on Earth, who wished to discredit us as soon as possible. The success of ZetaTalk is one such piece of evidence as to why we were targeted. Many claim to be conduits for the Pleiadeans when in fact they are merely working for the establishment.