There have been inferences that North Korea is not operating alone, but is in essence a puppet of the Bush/Clinton/Soros cabal, the same group trying to push Trump into war so martial law can emerge in the US. Ben Fulford has alluded to this. Q Anon comes right out and states this. It has been apparent that Soros is trying to fund chaos, and now this. How does chaos result in their being in control? [and from another] https://angel4light.wordpress.com/category/benjamine-fulford/ November 27, 2017.  The 7th Fleet is soon going to stop protecting the corrupt politicians in Japan, South Korea, and the secret Khazarian cabal colony of North Korea. [and from another] https://twitter.com/trumpqanon?lang=en [and from another] History lesson: Why did Bill Clinton’s North Korea deal fail? August 29, 2017https://www.washingtonpost.com/news/fact-checker/wp/2017/08/09/hist... North Korea’s program was clearly created to churn out nuclear weapons; the reactor at Yongbyon was not connected to the power grid and appeared only designed to produce plutonium, a key ingredient for nuclear weapons. The theory of the deal was that, with the plant shuttered and the plutonium under the close watch of the International Atomic Energy Agency (IAEA), North Korea would not be able to produce a bomb. There were also vague references in the text to improving relations and commerce. Clinton structured the agreement so that it was not considered a treaty that would have required ratification by the Senate.  Former Clinton administration officials have said they knew North Korea was cheating on the uranium enrichment front dating back to 1998 and planned to use that intelligence as leverage to keep the Agreed Framework in place and the plutonium under lock and key. Other Clinton administration officials will also concede that they never thought they would have to build the light-water reactors because they assumed, wrongly, that the regime would collapse before the reactors would be built. But in the end, the regime has survived. [and from another] Fact check: Clinton's record at State Department during Middle East chaos July 27, 2016 https://www.usatoday.com/story/news/world/2016/07/27/fact-check-cli... Hillary Clinton's tenure as President Obama's first secretary of State from 2009 through January 2013 was marked by extreme turmoil in the Middle East. It included the Arab Spring protests, Iranian nuclear brinkmanship and withdrawal of U.S. troops in Iraq. Republican rival Donald Trump said her tenure at State left a legacy of "death, destruction and weakness." ISIS took advantage of growing instability in Syria to seize territory there. Under her leadership, the State Department sought to work with various post-Mubarak political parties, including the Muslim Brotherhood, a previously outlawed group that tried to impose hard-line Islamic rule in a country used to a secular government. 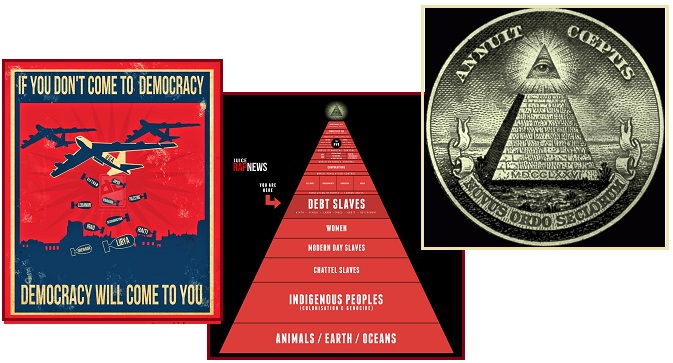 Why has the Clinton cabal encouraged chaos, as has Soros, a friend and supporter of Hillary Clinton? It is not just Bill Clinton as President ensuring that N Korea had nuclear material, the stuff of nuclear bombs.  During her time as Secretary of State, Hillary laid the groundwork for ISIS to arise, destabilizing the Middle East. Soros as we have noted funded Black Lives Matter and funded race riots in the US, and was responsible for trying to generate ISIS terrorist attacks in the US as well in Europe. Israel had a hand in the Charlie Hebdo attacks. Erdogan and Merkle have been shown to be colluding to install ISIS sleeper cells in Europe.

What is the purpose of generating all this chaos? The cabal works together, in what is known as the group trying to effect a New World Order. They operate by debt slavery, using the IMF and World Bank to create debt in developing countries. This has been countered by the BRICS consortium. Where the New World Order cabal is not in control, they are trying to destabilize the existing leadership. They plan to rise from the chaos, in control. Look who they are trying to install - unreliable and immature leaders, who are puppets. Not intelligent or capable or effective leadership.

Erdogan and Merkel wanted ISIS youth to run Europe, as they can be manipulated. The leadership among Shia and Sunni sects are set against each other, to destroy the current leadership. Iran’s irrational and war prone leadership was supported by Obama’s deal. The Saudis could be led in the past as they were a motley crew of pampered princes. Blacks in the US would be used to destroy local governments. Mexican immigrants would be used to invade white enclaves and roll over the border into Canada. Once the breakdown of leadership had occurred, the alternative leadership waiting would take over. That was the plan. Divide to conquer.

There is no theme that is consistent among the weak and ineffective leadership being installed by the New World Order cabal and their ultimate agenda. Instead, the New World Order would eventually set these weak leaders against each other. Europe was to be secured by ISIS cells and then later, when the citizens had been eliminated, German leadership, chosen, would eliminate the ISIS infection. Soros and Hillary wanted martial law in the US as they have contacts in the military they would push forward, and assumed they could assassinate the current Junta. All their plans, everywhere are being blocked, funds confiscated, pedophilia blackmail material seized.

Comment by Juan F Martinez on March 5, 2018 at 3:54am
Message from Q
Listen carefully.
TRUST.
WE are FIGHTING for YOU.
GOD BLESS YOU ALL.
Q