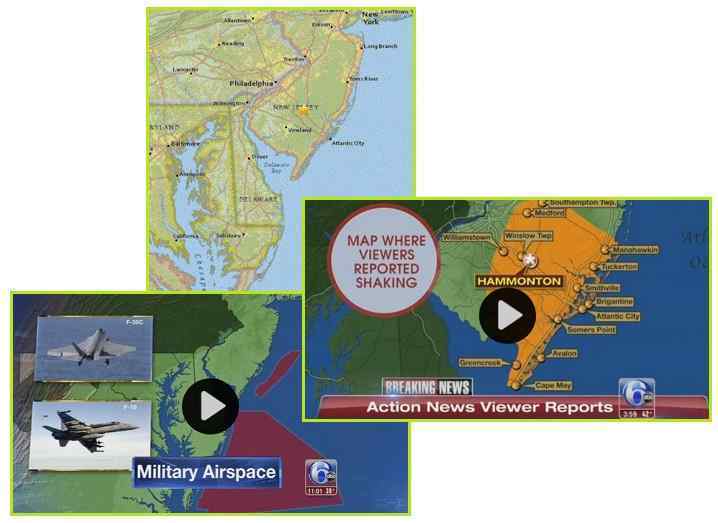 It is no coincidence that a notable quake at Gibraltar on January 25 traveled across the Atlantic to create booms and “earthquake-type” shaking multiple times, over many hours, on January 26 and January 28. What struck New Jersey was not sonic booms from military training runs that are reportedly done almost daily. Nor did the booms heard from Connecticut down along the East Coast to Georgia result from sonic booms off the coast of New Jersey. This is snapping rock, caused by the Atlantic pulling apart.  Africa rolled, the Atlantic at the western edge of the African Plate pulled open into a void, and New Jersey lost elevation and support, drooping, as a result.

Thank you, Stanislav. That was a very comprehensive post!

Excellent noticed Ancient Ally. Although there is a storm, loss of height makes the land more "voulnerable" to flooding.

4 September, 2014. Reuters. As the seas rise, a slow-motion disaster gnaws at America’s shores

Part 1: A Reuters analysis finds that flooding is increasing along much of the nation’s coastline, forcing many communities into costly, controversial struggles with a relentless foe.

Tidal waters worldwide have climbed an average of 8 inches (20 cm) over the past century, according to the 2014 National Climate Assessment. The two main causes are the volume of water added to oceans from glacial melt and the expansion of that water from rising sea temperatures.

In many places, including much of the U.S. Eastern Seaboard, an additional factor makes the problem worse: The land is sinking. This process, known as subsidence, is due in part to inexorable geological shifts. But another major cause is the extraction of water from underground reservoirs for industrial and public water supplies. As aquifers are drained, the land above them drops, a process that can be slowed by reducing withdrawals.

WATER EVERYWHERE (from left): Seepage of seawater into coastal marshes is believed to cause ghost forests like these on Assateague Island, Virginia. “Nuisance flooding” inundated the historic City Dock in downtown Annapolis, Maryland, several times this spring. NASA has had to invest tens of millions of dollars into seawalls and replenished beaches to protect launch pads and other infrastructure at its Wallops Flight Facility in Virginia. REUTERS/Kevin Lamarque; Mary F. Calvert; Kevin Lamarque

The coastal flooding is often minor. Its cumulative consequences are not. As flooding increases in both height and frequency, it exacts a toll in closed businesses, repeated repairs, and investment in protection. In effect, higher seas make the same level of storm and even the same high tides more damaging than they used to be.

In Charleston, a six-lane highway floods when high tides prevent storm water from draining into the Atlantic, making it difficult for half the town’s 120,000 residents to get to three hospitals and police headquarters. The city has more than $200 million in flood-control projects under way.

In Annapolis, home to the U.S. Naval Academy, half a foot of water flooded the colonial district, a National Historic Landmark, at high tide on Chesapeake Bay during rainstorms on April 30, May 1, May 16 and Aug. 12. Shopkeepers blocked doorways with wood boards and trash cans; people slipped off shoes to wade to work in bare feet.

Tropical storm flooding has worsened, too, because the water starts rising from a higher platform, a recent study found.

When Tropical Storm Nicole struck Maryland in 2010, it was no stronger than storms in 1928 and 1951 that were “non-events,” said the study’s author, David Kriebel, a Naval Academy ocean and coastal engineer. Nicole, by contrast, swamped downtown Annapolis and the Naval Academy. “It’s partly due to ground subsidence,” Kriebel said. “Meanwhile, there’s been a worldwide rise in sea level over that period.”

In tidal Virginia, where the tide gauge with the fastest rate of sea level rise on the Atlantic Coast is located, a heavy rainfall at high tide increasingly floods roads and strands drivers in Norfolk, Portsmouth and Virginia Beach. The latest wave of explosive seaside growth has occurred in the four decades since the state enacted laws to temper coastal development, protect the beaches that are Florida’s most treasured natural resource, and curb the rising costs of damage from tropical storms. During that time, the need to protect the coastline has only intensified.

As Reuters detailed in the first installment of this series, rising sea levels are not just a future threat: They are already here, a documented fact. The oceans have risen about eight inches on average over the past century worldwide. The rise is two to three times greater in spots along the Gulf of Mexico and the Atlantic Ocean because of subsidence, a process whereby natural geological movements and extraction of underground stores of water, oil and gas cause the ground to sink.

Higher water levels compound the effects of storms and regular flooding, hastening erosion. Hurricanes slam into Florida more than anywhere else in the nation; more than a dozen of them have resulted in major disaster declarations since 1990.

Yet, as Huckabee’s example in Walton County shows, the law has done little to discourage growth in harm’s way. Out of 3,302 applications for permits to build residential structures on Florida’s 825 miles of beaches since Jan. 1, 2000, just 114 have been denied, a Reuters analysis of state records shows.

Even without storms, rising seas are chewing away at the island’s unprotected beaches at a rate of two to 11 feet a year. The tide gauge at the city’s Pier 21 has shown a rise in relative sea level of 25 inches since 1908 – the largest increase over the past century at any of the scores of gauges monitored by NOAA.

About one-third of that rise was from oceans rising globally as water warms and polar ice melts. The remaining two-thirds resulted from land sinking due to subsidence, which happens when the removal of underground water, oil and gas causes the land to pancake.

Galveston Island is far from the only thing at stake. Between it and the mainland is Galveston Bay, connected to Houston by the 50-mile Houston Ship Channel, home to one of the world’s busiest ports. The entire area, once marshy wetlands, is lined with suburbs and at least $100 billion in oil refineries, chemical plants and related infrastructure. Metro Houston accounts for about 26 percent of U.S. gasoline production, 42 percent of base chemicals production, and 60 percent of jet fuel output.

A 25-foot storm surge pushing into the bay and up the ship channel would cause “economic catastrophe” to the nation and poison the bay in “the worst environmental disaster in United States history,” according to Rice University’s Severe Storm Prediction, Education, and Evacuation from Disasters Center. The Ike surge was just shy of that scenario. Around the world, the biggest increases were in Asia, reflecting the greater impact in that region of subsidence, the process by which geological forces and the extraction of groundwater cause the land to sink. Near Bangkok, Thailand, a tide gauge showed an increase of nearly 3 feet since 1959. In Manila, the Philippines, the sea level rose about 2.7 feet.

As the rising waters take a worsening toll, European governments and local authorities are forced to ask: What’s our coastline worth? And can we afford to defend it all?

Flooding from overflowing rivers and canals in the area is at least an annual event that forces Rahmawati and the rest of the kampong to evacuate to public buildings nearby. High-water marks from the last big flood, in 2013, are still visible on the walls of the kampong.

Jakarta is sinking because of a phenomenon called subsidence. This happens when extraction of groundwater causes layers of rock and sediment to slowly pancake on top of each other.

The problem is particularly acute in Jakarta because most of its millions of residents suck water through wells that tap shallow underground aquifers. Wells also provide about a third of the needs of business and industry, according to city data.

“It’s like Swiss Cheese underneath,” the World Bank’s Fook said. “Groundwater extraction is unparalleled for a city of this size. People are digging deeper and deeper, and the ground is collapsing.”

The effect is worsened by the sheer weight of Jakarta’s urban sprawl. Economic development in recent decades has transformed the city’s traditional low-rise silhouette into a thickening forest of high-rise towers. The weight of all those buildings crushes the porous ground underneath.

Previous articles in this series have focused on rising seas, which are climbing as the warming atmosphere causes water to expand and polar ice to melt. Ocean levels have increased an average of 8 inches globally in the past century, according to the United Nations-backed Intergovernmental Panel on Climate Change.

But in many places – from metro Houston, Texas, and cities on the U.S. East Coast to the megacities of Southeast Asia – the impact of subsidence, due mainly to groundwater extraction, has been greater. Manila is sinking at a rate of around 3.5 inches a year. Ho Chi Minh City, Vietnam, is subsiding 3 inches a year, and Bangkok around an inch.

I am curious if there was a measurable drop in the elevation of New Jersey. I went hunting for stories about flooding in New Jersey coastal towns and found these: