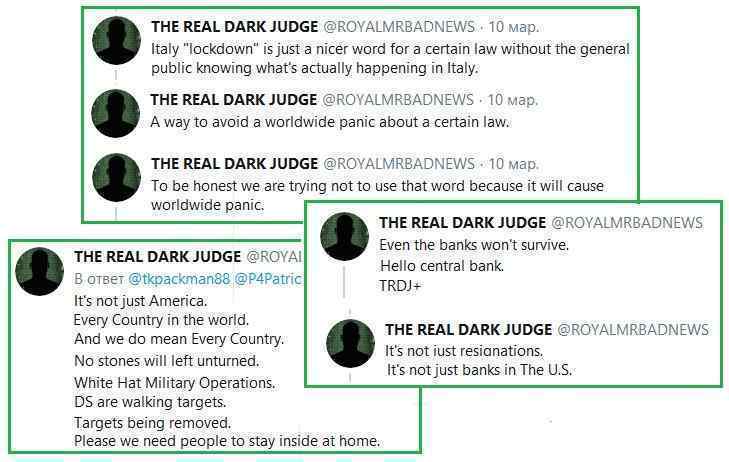 We stated weeks ago that any Martial Law steps enacted due to the Covid-19 pandemic would likely remain in place, due to the expectation that Nibiru will no longer be deniable. Heads of State were told that January 2021 was the date when they could expect their citizens to be aware of Nibiru, even without official acknowledgement, and even despite all the loud arguments the cover-up crowd asserts. But this pandemic was not started with that goal in mind, as it was started by nature in the wet markets of China where optimum conditions were present for the emergence of Covid-19.

But Martial Law proponents are certainly taking advantage of this opportunity to get the public used to the idea of tight control over a restless public. Restricted movement, cancelation of large public gatherings prone to riot, control of food delivery and shopping access – all these trend to an environment that would comply with Martial Law edicts. But for those who state that these steps are not necessary to control the pandemic, we would point to China, which has conquered Covid-19, flat lining their new cases. This is the goal, to avoid another lingering and repeating pandemic such as the Spanish Flu epidemic in 1918.

Why is the Dark Judge reluctant to use the term “Martial Law”. He knows that this is a trigger term that can incite riot. Two things must happen before that day: 1. Nibiru must be admitted or acknowledged by the establishment, as this is the reason for continuing Martial Law, and 2. The current Covid-19 pandemic must be tamed, which we predicted will occur by mid-Summer when it will be “dramatically eased”. Given the strain on healthcare and hospitals worldwide, the shutdowns and lockdowns will not be completely lifted until data on new cases shows the pandemic will not re-emerge.

In that many Central Banks are releasing more funds to stimulate the economy or shore up distressed industry or provide relief for temporarily unemployed citizens, the role of Central Banks during Martial Law is being exposed. The history of money shows primitive man using the barter system and then the emergence of money as a convenience and then the establishment of Central Banks to control runaway inflation from flooding of new dollars into the economy. New funds are needed as the population increases, but too many dollars at once can create a Banana Republic syndrome. Martial Law puts the military in control of these decisions.

Are extraordinary arrests of those targeted by the Tribunals being made during the pandemic lockdowns? Why would they not? Those trying to evade the Tribunals run from country to country, seeking non-extradition or just a friendly hideaway. When airlines are grounded so that private plane use is exposed, and the streets are virtually empty of pedestrians and cars so that any traffic is obvious, such arrests and instant extradition are facilitated. Once again, this does not mean that Covid-19 was engineered or released to facilitate this cleanup. The Tribunals are just being opportunists.

President Trump announced an executive order Tuesday that aims to make hundreds of deregulations in the age of coronavirus permanent, something that would amount to a massive overhaul of regulatory policy.

"We've done far more regulation cutting than any president in history," Trump said at a Cabinet meeting ahead of signing the order.

Fox News is told the executive order tells regulatory agencies to look at more than 600 regulatory actions -- mostly deregulations, but also regulations and guidance -- taken during the coronavirus pandemic and tell the White House which ones should be made permanent.

"We had cases where it would take 20 years to build a highway, you had to go through various agencies to get the same permit," the president said.

"If a bureaucratic rule needs to be suspended during a time of crisis to help the American people, we should ask ourselves if it makes sense to keep at all," Acting Office of Management and Budget (OMB) Director Russ Vought told Fox Business.

The order will use emergency authority to figure out the best way to identify which other regulations still in place can be suspended to help jumpstart the economy. It will ask agencies which authorities they have to take action that would lead to putting people back to work, and that list should be sent to the OMB.

"Typically when our country has faced a crisis, Washington responds by grabbing more power. President Trump understands that to get the economy moving, the power needs to be given back to the people and entrepreneur," Vought said.

The order also relaxes compliance measures overall. Agencies will be told not to over-enforce regulations on small businesses and nonprofits that are doing the best they can. 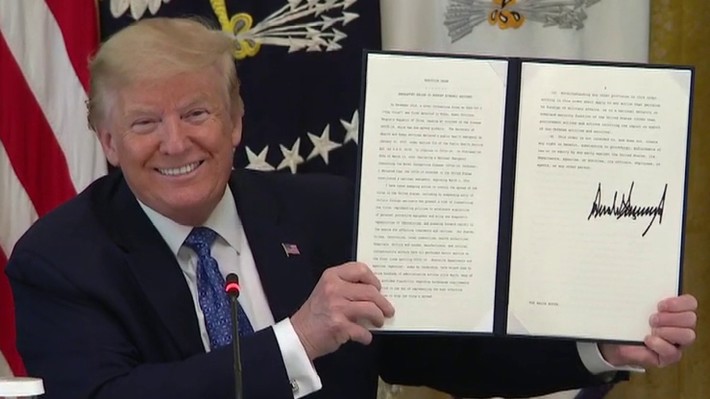 U.S. government braces for impending disaster under the guise of COVID-19

(INTELLIHUB) — An ultra-secret military task force in preparing to secure and possibly evacuate the entire Washington D.C. area along with the U.S. Capitol ahead of a major upcoming event unbeknown to the general public at this time.

A Newsweek exclusive report released on Wednesday reveals how “a little-known military task force charged with evacuating Washington has already been activated, a task force charged with the most sensitive government mission of “securing” Washington in the face of attackers, foreign and domestic—and if necessary, moving White House and other key government offices to alternate locations.”

According to the report, the Joint Task Force National Capital Region (JTF-NCR) was activated on Wednesday one month after President Trump declared a national emergency under the guise of the invisible enemy known as COVID-19.

The ultra-secret team has been ordered to “defend” at all costs the capital city’s waterfront, land, and airspace from whatever top military strategists within the U.S. government know is arriving.

As you may already know, Intellihub founder Shepard Ambellas has been trying to warn people of an impending disaster for weeks now and has made dozens of diligent appearances on broadcasts, including Coast To Coast AM with George Noory, and podcasts such as Crowdsource the Truth, in an attempt to warn the American populace of what Amebella’s speculates is an “inbound near-earth object,” possibly an asteroid, extinction-level event, or Planet X.

Ambellas lays it all out in a brilliant report and presentation titled Doomsday plan activated: The real reason FEMA is in control and POTUS is now powerless where he claims that Celestial objects may be on a direct collision course with earth and reports on a White House plan to mitigate earthbound near-earth objects in last-ditch effort to save humanity.

“The first asteroid intersects earth’s orbit Wednesday, April 15, then again on April 29, and beyond,” Ambellas wrote “This is not a drill but rather a real-world ‘live exercise'” as Secretary of Defense Mike Pompeo stated during a White House press conference last month.

Now, the Pentagon is talking about potentially evacuating the city per se, if they feel something bad may hit. (i.e. a COVID-19 spike in deaths or another disaster) 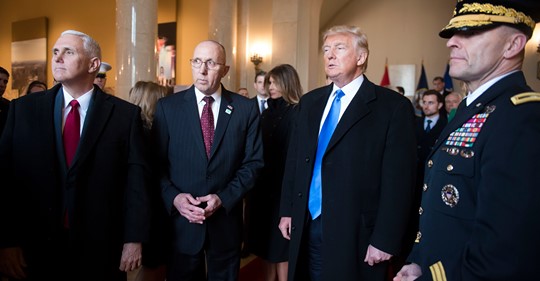 Ever since National Guards started to activate countrywide, Pentagon officials have insisted that men and women in uniform are not conducting secret missions and that they will not administer or enforce “stay at home” quarantines. The Pentagon has also rejected reports, including articles in Newsweek, about martial law or other extreme contingency plans, arguing that the Guard remains under strict control of state governors, while federal troops support civil agencies like FEMA.

And yet the activation of Joint Task Force National Capital Region, including almost 10,000 uniformed personnel to carry out its special orders, contradicts those assurances. JTF-NCR is not only real and operating, reporting directly to the Secretary of Defense for some of its mission, but some of its units are already on 24/7 alert, specially sequestered on military bases and kept out of coronavirus support duties to ensure their readiness.

Keep in mind, it comes after President Trump announced this week that hospitals did not need to use many ventilators during the current COVID-19 outbreak and claimed that the unused ventilators would be added to the U.S. stockpile to be used at a later date.

Moreover, the president ordered on Tuesday the dispersal over 6.5 million dust masks to “essential workers” throughout the Continental United States.

Couple all of that with Trump’s most recent order to send military medical personnel from the USNS Comfort and USNS Mercy to staff empty hospitals, triage tents, and sports stadiums across the country–I myself tend to think that we may have an evolving problem and that Ambellas may be right with his theory. 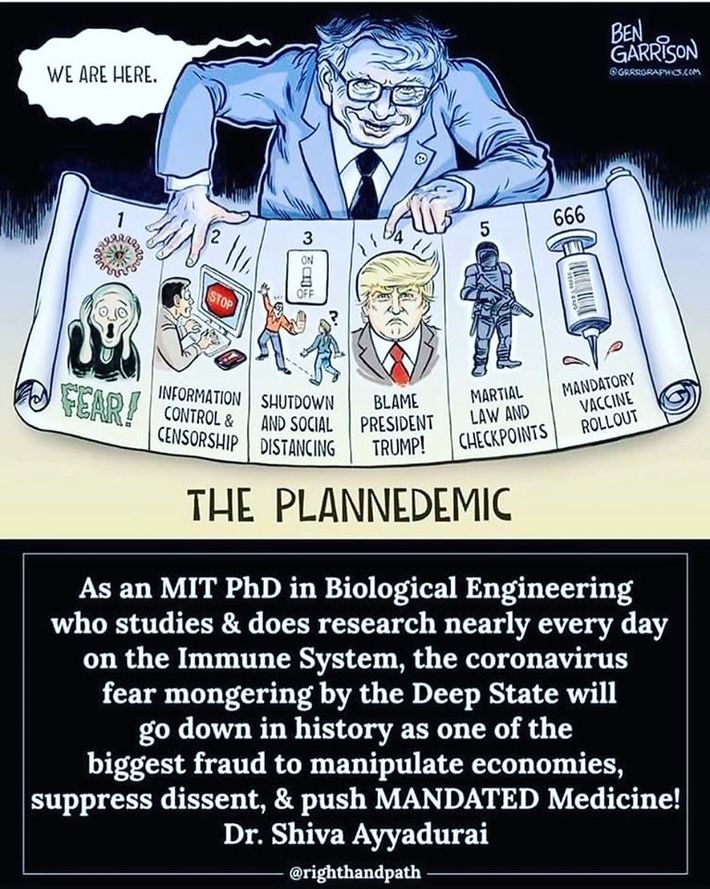 President Trump said 1,000 additional military personnel are being deployed to New York to help the city manage the coronavirus outbreak.  4/4/2020

"At my direction, 1,000 military personnel are deploying to New York City to assist where they’re needed the most," Trump said at a White House coronavirus task force briefing Saturday. "That’s the hottest of all the hot spots." 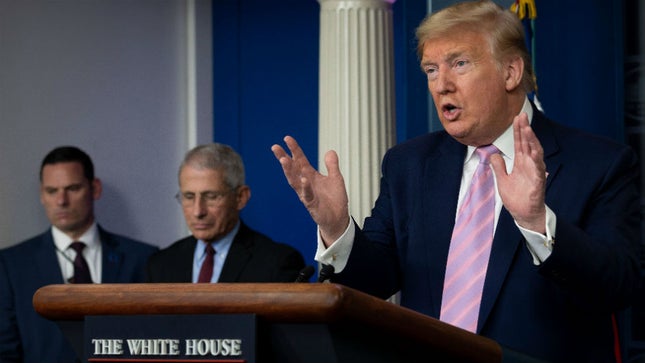 "YOU WILL NOT GET REAL PICS".

It's the last thing these poor kids will face who didn't see light of days for years when being rescued taking their photos. That would show them no compassion and take away the last shred of dignity they may have.

The story is very real and we need to understand this. 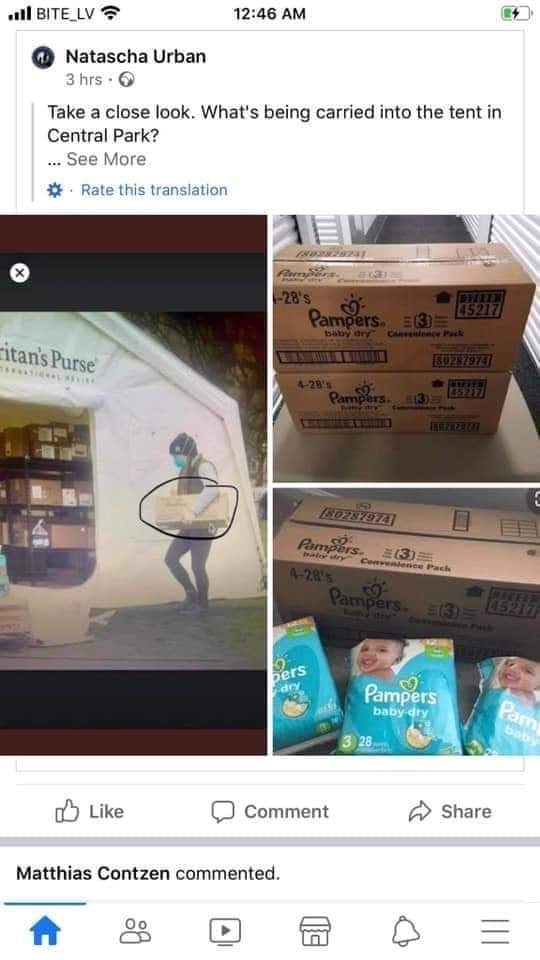 "I want every American to be prepared for the hard days that lie ahead," Trump said at a White House news briefing.

"We're going to go through a very tough two weeks, and then hopefully, as the experts are predicting ... we're going to start seeing some real light at the end of the tunnel." 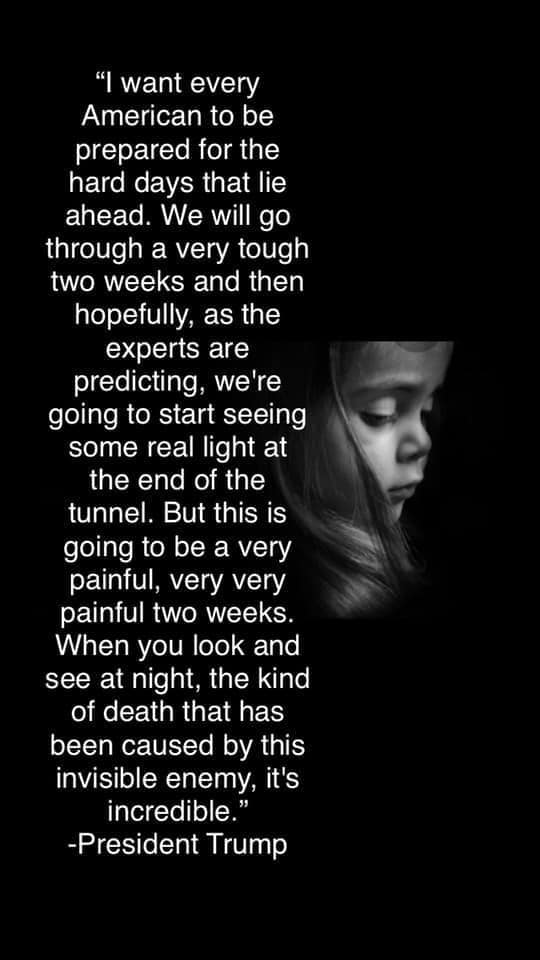 Something BIG is coming.   Q MASS POPULATION awakening. Let's think outside the box. A famous movie star, or a FISA signer maybe huge for 350 Milllion in USA but not make a huge awakening for the world. THINK GLOBAL. Who is known and trusted by BILLIONS worldwide. Bill Gates. 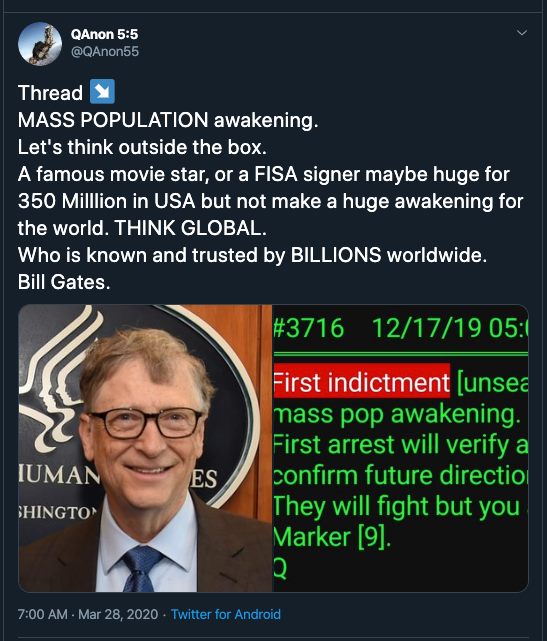