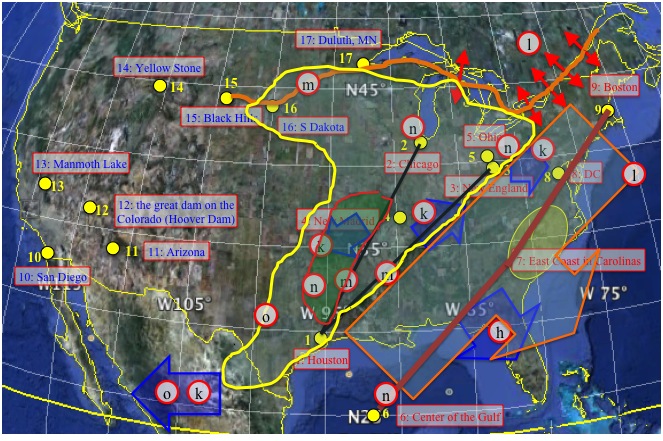 * Note: This blog is the same one posted in June, 2010, but not found presently.

I drew the plate movement to happen in US until or during the New Madrid adjustment in a map.

The main flow until the New Madrid adjustment is seemed to be,

(A) Planet X is creating a slow continental drift [zeta94],

(B) This drift will increase in speed and force [zeta94],

(C) The overall effect of this drift will be a torque [zeta94],

(E) The stress on the N American plate will resolve by ripping [zeta261], and

(F) The primary drama will be the ripping action that a plate unable to move must endure [zeta261].

The number in the map is the name of place, and the alphabet in the map corresponds to the following sentence.

(a) By gripping the Atlantic Rift, the cause of the Global Quakes that have racked the Earth for over a year, Planet X is creating a slow continental drift. (zeta94)

(b) The Atlantic Rift is held back when it faces or is in opposition to Planet X, creating not only a pile up in the plates following the rift, but also tearing apart the rift by the momentum to the East. (zeta94)

(c) This process continues during whiplash, but what is the effect on the plates on either side of the rift when a void is created? There is a slide into the void, on the side experiencing a pileup, and thus the N American Plate is dropping into the void, relieving the stress of compression along its northern border in the Arctic by a torque to the side as it does so. (zeta94)

(d) During the pileup in the Pacific, the Indio-Australian Plate is being jammed under the Himalayans, causing this plate to drop and creating another void in the Indian Ocean. (zeta94)

(e) This is the cause of the African Rift, and this great continent once again is pulled into the void, thus the recent noticeable stress in the region of the African Rift. (zeta94)
(f) The overall effect of this drift, which will increase in speed and force as the whiplash proceeds, will be a torque. (zeta94)

(g) Hold the globe with the left hand on the N Pole, the right hand on the S Pole, and turn in opposite directions first this way, then back. (zeta94)

(i) The Atlantic is pulled apart, the Pacific compressed. (zeta261)

(j) It (S America plate) moves as a whole, in the main, crunching the small plates in the Caribbean and Central America. (zeta261)

(l) The stress on the N American plate will resolve by ripping. Ripping the St. Lawrence Seaway open. Pulling the SE down into the crumbling Caribbean and into the widening Atlantic. (zeta261)

(m) But the primary drama preceding the pole shift will be the ripping action that a plate unable to move must endure. The notable area of catastrophe during this is the eastern half of the continental US. From Houston(1) to Chicago(2) to New England(3), the diagonal pull will tear the underpinning of cities and create a catastrophe for the US that will make the New Orleans disaster appear trivial. A widening Seaway also does not affect just those land masses bordering the Seaway, as buckling occurs inland and afar. What does man assume caused the Black Hills(15) to be so rumpled, with the appearance of a recent bucking and heaving? This is the center of a land plate! The tearing of the Seaway does not end at Duluth, MN(17), it travels underground to S Dakota(16)! (zeta261)

(n) The New Madrid adjustment will affect so much area, in a domino manner, that it will not be a single large quake, but a series, separated by weeks and months. The primary adjustment will be within days, after shocks for weeks, but months later still, adjustments. The New Madrid(3) is associated with fault lines that run up toward the Great Lakes, Chicago(2) will adjust and rupture, Ohio(5) will be pulled in places, and as we have explained, the land to the West of the Mississippi will sink in places. There is a known fault line that runs from the center of the Gulf(6) up along the East Coast(7), thus the effect in 1811-12 in the Carolinas and DC(8) on up to Boston(9). (zeta359)

(o) We have repeatedly warned that the US southwest was going to undergo a bowing stress, a situation that would last until the N American continent adjusted by a diagonal rip along the extended New Madrid Fault line, which includes fracturing from New England(4) through the Midwest and down into Mexico. Until that adjustment occurs, Mexico is tugged to the west, causing a bow to form along the West Coast. The bow causes compression at its center, at the San Andreas Fault line near San Diego(10), and expansion inland. This bow is what caused the Utah mine collapse, as we explained at the time. Indirectly, this bow is what caused the Minneapolis bridge collapse, as it forces the St. Lawrence Seaway to open, causing adjustments all the way to the Black Hills(15) of S. Dakota. (zeta405)